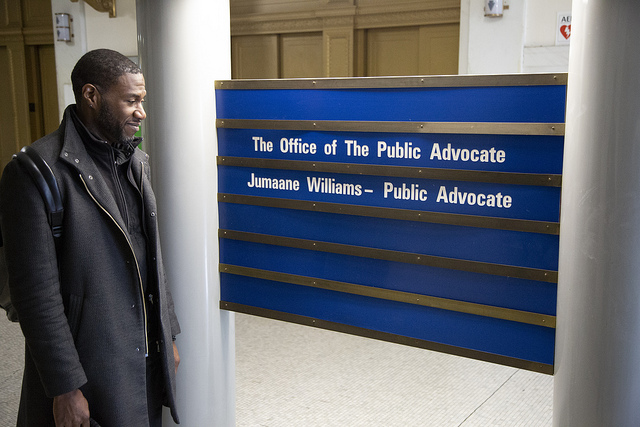 Jumaane Williams, the City Council member elected public advocate in a special election last month, has vowed a renewed push for increased funding and an independent budget to bolster the meager resources of the office he now occupies.

Over the course of the six-week long special election that Williams won, virtually all of the 17 candidates who were on the ballot argued that the public advocate’s office needs more funding. One of just three elected positions with citywide responsibilities, the public advocate’s office currently has a budget of $3.6 million for the year, giving it little leeway to pursue the grand promises that each candidate made, whether it involves investigations of city agencies or creating new deputy public advocate offices in the boroughs, as Williams himself has pledged.

“I haven’t met too many people that said the money they have is sufficient to do the work they have to do. So the short answer is, you can always use some additional funds,” Williams said when asked about the public advocate’s budget at his first news conference at his new office on Thursday afternoon. Williams was sworn in by the city clerk at a private ceremony on Wednesday and will be transitioning into the role over the next few weeks (results of the special election still need to be certified and Williams must resign from his City Council seat).

Renewed focus on the office’s budget thanks to the special election comes in the early stages of city budget season, with a new spending plan due by July 1, the start of the city’s fiscal year, and as a charter revision commission considers an overhaul of the city’s foundational laws. The commission’s work will include reevaluation of the role of the public advocate and consideration of independent budgeting for various offices.

Williams appears ready to simultaneously push for more funding for next fiscal year and independent budgeting for the long-term, something that the charter commission would have to propose and voters would have to approve in November, when Williams is expected to again be on the ballot to attempt to earn the rest of the current four-year term through 2021.

In a subsequent Thursday phone interview with Gotham Gazette, Williams said, “Two things that would make this office immediately strong are subpoena power and independent budgeting. As the watchdog-ombudsman, it would make sense that this office would have a budget that’s not subject to the whims of the government that we’re supposed to be an ombudsman over.”

Williams did concede that he doesn’t have a budget figure in mind and that he has yet to figure out “the most pragmatic and effective way to do that.” He added, “I do feel like people understand why it’s necessary.”

Currently, the Independent Budget Office, a nonpartisan city-funded fiscal watchdog, is the only city government agency or entity with a budget pegged to another existing one rather than being allocated by the mayor or the mayor and the City Council through the annual city budget process. By law, IBO’s annual budget cannot be less than 12.5 percent of the annual funding for the mayor’s Office of Management and Budget. That precludes any mayor from slashing IBO’s budget at their whim.

The public advocate’s budget, on the other hand, is set by the mayor and City Council, which is what allowed former Mayor Michael Bloomberg to cut funding to the office when he was in power. Mayor Bill de Blasio, a former public advocate himself, restored that funding and has incrementally increased it each year. In turn, calls for independent budgeting also seemed to fade away and then-Public Advocate Letitia James, now the state Attorney General, did not take a position on it.

The mayor’s preliminary budget for the 2020 fiscal year beginning July 1 proposes increasing the budget again, to $3.8 million, up from $3.1 million in de Blasio’s first adopted budget in 2014. When he was public advocate, de Blasio led a push for independent budgeting for the Civilian Complaint Review Board, which investigates police officer misconduct, indicating that he’s open to the concept of separating funding for a government watchdog.

“We look forward to reviewing a proposal for an independent budget for the Public Advocate’s office,” said Raul Contreras, a de Blasio spokesperson, in an email. “It’s worth noting that this administration has significantly increased the Public Advocate’s budget by 66 percent since taking office.”

Even at the proposed $3.8 million for next fiscal year, the public advocate would be tasked with keeping watch over a city government de Blasio has said will spend roughly $92.2 billion during the same time period.

The circumstances of the special election had other elected officials also clamoring for greater resources for the city’s ombudsperson, including City Council Speaker Corey Johnson, who served as acting public advocate while the seat was vacant for seven weeks.

“I think independent budgeting is key for this office so it’s not on the whims of whoever the City Council speaker is or whoever the mayor is and that it can be a truly independent watchdog,” Johnson told reporters as he walked Williams to his new office at 1 Centre Street last week. “I know that’s what Jumaane would do with whatever budget he has but it’s beyond one public advocate, it’s beyond one speaker of the Council. It’s really about checks and balances.”

The City Council has also called on the 2019 Charter Revision Commission to consider a charter amendment to give the public advocate the ability to submit a proposed budget into the mayor’s executive budget, the second iteration of the annual spending plan.

In its report to the Charter commission, the Council noted that the mayor sets the public advocate’s and comptroller’s budgets though both are independently elected citywide officials. “This budgetary relationship can become more political than practical and may significantly hamper the ability of these elected officials to do their work — particularly if their priorities conflict with the Mayor’s priorities,” the report reads.

The comptroller’s budget is currently $107.5 million for this fiscal year.

The charter commission is currently holding hearings to solicit expert testimony on various focus areas, including on independent budgeting for entities such as the public advocate and whether to propose modifications to the public advocate’s powers or perhaps eliminate the office entirely.

At a January 31 hearing where the commission voted on those focus areas, Commissioner James Vacca, a former City Council member, did raise concerns about independent budgeting. “I think that you will have a lot of people knocking at your doors and they will be saying that they want to establish their own budgets, too, and I don’t know if that’s fiscally possible or responsible,” he cautioned.

Williams has promised that he’ll make the most of his limited resources. “As a Council member, I didn’t have nearly this kind of budget and I think I was able to be effective,” he said. “And now, in this position, I think I’m able to amplify [issues] even more...An independent budget just makes it that much more effective. So we’re going to continue to push but we’re going to get the job done either way.”