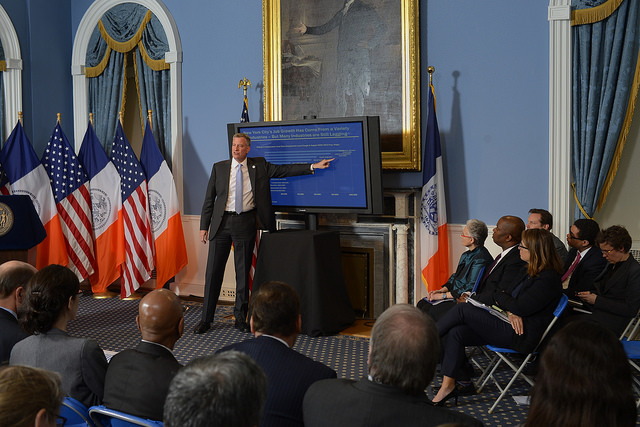 During the annual budget process, city agencies and entities are at the mercy of the Mayor and the City Council, who ultimately set the budget. But unlike many, the several agencies and officials who regularly monitor, regulate, or litigate against the mayoral administration are put in an awkward situation, annually appealing for funding in a dynamic that can hamper their ability to carry out charter-mandated duties and, in some cases, lead to politically-motivated budget cuts.

The Public Advocate, for example, is meant to act as a watchdog over the mayor, but relies on the mayor to determine the office’s budget.

Representatives of the city’s Conflicts of Interest Board, tasked with training and regulating city employees including the Mayor and City Council members, have said this spring that their agency is underfunded but that repeated requests for additional funding have been turned down by the city’s Office of Management and Budget.

Independent budgeting for oversight or autonomous entities, which include Borough Presidents, the Public Advocate, Comptroller, Department of Investigation, District Attorneys, and Conflict of Interest Board, is a solution that was once widely promoted by members of the public and government officials alike. Under independent budgeting, offices would receive a fixed annual amount scaled to the budget for a larger pertinent office or some set percentage of the city’s overall expense budget.

The Independent Budget Office is the only city agency with fully independent budgeting, a position it enjoys because of its unique oversight duties. Rather than have its budget set by the Mayor, IBO receives "no less than" 12.5 percent of the annual budget of the Office of Management and Budget. The Campaign Finance Board also has a somewhat-independent budget—the Mayor must include an annual amount suggested by the CFB in the Executive Budget without adjusting it, but that amount is subject to recommendations made by the Borough Presidents, Comptroller, and Mayor, and can be amended by the City Council.

Support for independent budgeting seems to have peaked during Mayor Michael Bloomberg’s administration, seemingly fueled by dissatisfaction with an especially thin budget. According to a 2010 report by government reform group Citizens Union, “most” of the borough presidents, the Conflict of Interest Board, former Public Advocates Mark Green and Betsy Gotbaum, and then Public Advocate Bill de Blasio had requested independent budgeting for their respective agencies by that year.

“In this current structure, there is simply no way for a borough president to be a truly independent voice,” Marty Markowitz, then-borough president of Brooklyn, said in a 2010 testimony before the city Charter Revision Commission. “We go in and ‘pitch’ as if we were a nonprofit community group or cultural organization hoping upon hope that in the end, we get the funding we need for the staff and resources to do our Charter-mandated jobs.”

That Charter Revision Commission did not reach a conclusion regarding independent budgeting, but vaguely urged future commissions to “devote significant resources to studying the roles of both COIB and various elected officials so as to make an intelligent assessment of their fiscal needs” and “assure the independence and stability of such entities.”

One remaining proponent of independent budgeting is the Conflict of Interest Board, which has been especially vocal in recent years. The board first proposed an amendment to the city charter to establish independent budgeting in 2009. At the time, COIB said that its ability to fairly judge and regulate city officials was impeded by its place in the annual budgeting process, and requested that it receive no less than seven thousandths of one percent (0.00007%) of the city’s annual expense budget.

Last year, COIB reiterated its proposal with its request adjusted to four thousandths of one percent (0.00004%) of the city budget—a proposal that it stood by this year. The reduction corresponds to the Board’s decision to drop its request for investigative authority. Four thousandths of one percent of this year’s $82.2 billion Executive Budget would have given COIB $3.3 million; instead, it is allocated $2.33 million.

Because COIB is an independent ethics agency without a source of revenue or set constituency, the Board’s argument goes, it should not have to rely on the officials it regulates to pass on the board’s funding. COIB has cited similar independent budgeting systems already in place for the state of Michigan’s Civil Service Commission, New Orleans’ Ethics Review Board, and Philadelphia’s Board of Ethics.

Despite reiterations of this proposal by COIB every year, the city administration has not moved toward a charter amendment despite support from some City Council members. COIB Executive Director Carolyn Miller told Gotham Gazette that in her view, this inaction likely stemmed from administrative reluctance to increase the number of agencies not centrally monitored and controlled for financial reasons, which she acknowledged was “reasonable.”

“There hasn't been that much receptivity generally,” Miller said. “I think probably it's more of an administration issue than a Council issue.”

City Council Member Alan Maisel, chair of the Committee on Standards and Ethics, which has oversight of COIB, told Gotham Gazette that he agrees COIB should have independent budgeting.

“They should not be dependent on a particular budget item because then of course there's always the implication that they're being prevented from doing their absolute necessary job,” Maisel said. “But it's not getting much traction. I think when it comes down to assigning dollars to different agencies this is not a priority.”

COIB’s proposal is primarily an ethical one—although its independent budgeting proposal would increase the Board’s funding, Miller says COIB would still be underfunded. The board’s budget has been markedly anemic even after a 2010 charter amendment mandated that COIB provide biannual ethics training to all city employees. That year, the Board’s supervisors took two percent pay cuts in order to maximize training personnel, and although COIB’s adopted budget increased from $1.88 million for fiscal 2010 to $2.22 million for fiscal 2016, those pay cuts have not been reversed, according to Miller. Meanwhile, the city employee headcount continues to swell, giving COIB more people to train and assist with ethical quandaries.

This year, COIB testified at a preliminary budget hearing that it was underfunded and had made repeated requests to the city’s budget office for more funding. After being denied several times, COIB wrote a letter to the city budget office requesting just $26,000 in additional funds for its “most critical budget needs,” which was granted. Mayor de Blasio said he was unaware of the board’s financial struggle when asked about it by Gotham Gazette at a May 15 press conference, but promised to reexamine the board’s funding.

When the Independent Budget Office upset Mayor Rudolph Giuliani in 1998, its independent budget ultimately saved it from his attempts to defund the agency in retaliation. IBO had charged the mayor with violating the City Charter by withholding city finance information from the budget office, and Giuliani, a Republican, called IBO “the most partisan group of Democrats” and implied the agency should be abolished. Because of IBO’s independent budget, however, Giuliani was unable to weaken the budget office’s funding in subsequent years.

“IBO would not have come into being were it not for the guaranteed budget line, and it certainly would not have remained in business...Why would the Mayor or Speaker [of the City Council] want the city to fund an agency over which they had no control? You can understand the political calculus,” IBO Director Ronnie Lowenstein told Gotham Gazette. “In the past, borough presidents and public advocates have also fought with similar logic to get a budget guarantee.

Throughout his time in office, Mayor Michael Bloomberg, a Republican-turned-independent, made his displeasure with the office of the Public Advocate clear in word and deed, calling it a “total waste of everybody’s money” even after reducing its budget from $2.9 million to $1.8 million. Last year, former Public Advocate Betsy Gotbaum told Gotham Gazette that mechanisms should have been in place to protect her office from Bloomberg’s personal motivations.

“The mayor…should not be controlling the budget of the person who’s looking over their shoulder,” Gotbaum said. “Because [Bloomberg] would get furious at me and then come June, July, he’d cut the budget.” (All four public advocates, including the current one, Letitia James, have been Democrats.)

As the first former public advocate to be elected mayor, de Blasio quickly increased the public advocate’s budget to $3.2 million for fiscal 2015 and then to $3.4 million for fiscal 2016. James took advantage of the budget increase to carve out an enhanced, especially litigious role for her office. While taking on certain issues and criticizing specific city agencies, James has not been publicly critical of de Blasio. She has also not called for independent budgeting.

Maisel sees the public advocate’s current power and budget as tenuous. “The job of the public advocate is to look into everything and try to correct the things that need to be corrected. Some people take it personally, like mayors,” Maisel said. “Betsy Gotbaum was not a malicious individual, she saw a need for her to do certain things. And Giuliani and Bloomberg both belittled whoever the public advocate was.”

Maisel’s view is in line with the 2010 Citizens Union report, which concluded that it “undermines honesty and integrity in our elected officials if they feel the need to couch their remarks and opinions for fear of having their budget cut.”

The Citizens Budget Commission, a nonpartisan, independent budget watchdog organization, does not have a stance on independent budgeting according to Vice President Maria Doulis, who added in a statement to Gotham Gazette that CBC does “caution against dedicated formulas” for funding agencies.

The Comptroller and Department of Investigation are also responsible for weeding out fraud and abuse among city officials, but have not undergone the same level of financial turbulence from administration to administration as the public advocate. While the Comptroller’s funding has increased steadily from $66 million in the fiscal 2010 adopted budget to $96 million in this year’s executive budget, DOI funding has increased by nearly 43 percent in the past year to $47 million in this year’s executive budget, which scales with a newly proactive role the department has taken on. Spokespeople for both the Comptroller and DOI declined to comment on the prospect of independent budgeting.

Like the Public Advocate, who regularly files suits against the de Blasio administration, District Attorneys are responsible for pursuing public corruption cases against city and state officials. In a notable recent example of such action, Manhattan District Attorney Cy Vance subpoenaed City Hall last month as part of his investigation into the fundraising activities of Mayor de Blasio and his allies.

Some have pointed to a web of political connections between Vance and de Blasio, one strand being the simple fact that de Blasio sets the annual budget for Vance’s office. A spokesperson for Vance declined to comment on the topic of independent budgeting. All five district attorney offices recently testified at a City Council budget hearing that they are in need of more funds.

“In most cases you wouldn't have the investigative agency at the mercy of the executive when the executive is going to be the subject of the investigation, that makes no sense,” Maisel said. “There should be some impartial way of determining how much money a District Attorney gets so it's not subject to the whims of who happens to be in the administration doing the budget.”

Note: this article has been corrected to reflect that IBO receives no less than 12.5% of the OMB budget, not 10% as previously stated.