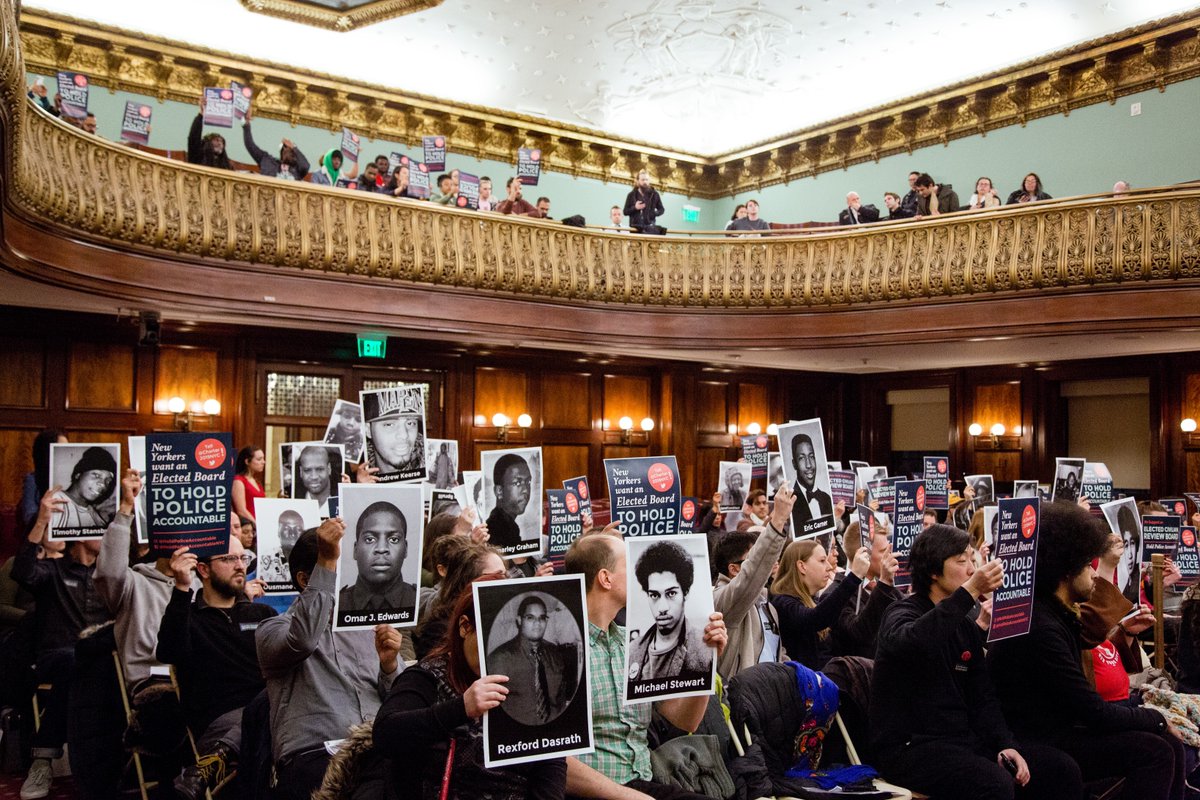 The 2019 Charter Revision Commission met on Thursday evening to discuss police accountability reforms before an impassioned crowd filled with activists. Local advocates along with some politicians have long called for increased transparency and accountability in policing, particularly in recent years following the 2014 death of Eric Garner at the hands of NYPD officers on Staten Island and the slow, somewhat secretive process by which any accountability has been handled for that incident and others like it over the years.

The commission heard testimony from experts from representatives of the Civilian Complaints and Review Board (CCRB), NYPD, Legal Aid Society, and a variety of police reform advocacy groups.

It was the second charter revision commission hearing this year featuring “expert” panels on key areas that the commission is considering for reform recommendations. The commission, which has narrowed its focus areas to four big buckets, will make its recommendations this summer and its proposals for changes to the city’s charter, its foundational governing document, will go before voters in November.

The four focus areas are elections, which the commission met to discuss the week prior, governance, finance, and land use. Thursday’s meeting was the first to discuss governance, which includes police accountability.

The hearing occurred one day after the Legal Aid Society released a database of more than 2,300 cases of police misconduct involving almost 3,900 police officers between 2015 and 2018 (police unions say the database contains false and trivial allegations).

The CCRB is currently the primary mode of formal police accountability in New York City. The civilian board, members of which are appointed by various officials and groups, investigates citizen complaints of police misconduct in four arenas: force, abuse of authority, discourtesy, and offensive language. The board then recommends a certain level of discipline to the police commissioner, who holds the ultimate authority to determine and enforce penalties for misconduct.

The CCRB is a 13-member body: the City Council appoints one member per borough, the police commissioner names three members with experience in law enforcement, and the mayor installs five members and names the chair.

The hearing was divided into three panels, though unlike the election reform hearing, which was split thematically, the police accountability panelists discussed similar issues and recommended similar amendments to the charter to address the topic at hand.

The first panel included representatives from Citizens Union, a government reform group focused on transparency and accountability, Communities United for Police Reform, an activist organization, NYC Campaign for an Elected Civilian Review Board, and the New York Civil Liberties Union.

The second panel hosted a criminal justice professor from Borough of Manhattan Community College, an attorney from the Legal Aid Society, president of the Boston-based National Association for Civilian Oversight of Law Enforcement, and the Independent Monitor of the Denver Police Department.

And to conclude the hearing, the third panel was composed of the executive director of the CCRB, the NYPD legislative affairs director, and an NYPD Deputy Commissioner.

All panelists and commissioners broadly agreed on the importance not only of accountability and transparency in the NYPD, but also on the maintenance of public perception of these tenets. Ideas on how to achieve those goals––or thoughts on whether New York City has already achieved them––differed.

With exception from the two NYPD representatives, a consensus emerged among most panelists around amending the charter to increase the CCRB’s legal strength and to compel the NYPD to release public rationale when the commissioner’s disciplinary decisions divert from the CCRB recommendation. Many experts also advocated increasing CCRB’s budget in tandem with that of the NYPD.

Executive director of the CCRB Jonathan Darche proposed four amendments to the charter: codification of CCRB’s administrative prosecution unit, allocation of subpoena power to the board’s “highest ranking staff,” a stronger impetus for NYPD compliance with the CCRB’s requests for information and documents, and to raise the CCRB budget to one percent of the NYPD budget.

“While the department will continue to encourage a healthy working relationship that goes beyond the strict bounds of the charter,” said Oleg Chernyavsky, executive director of the NYPD legislative affairs unit, “we do not support such an expansion of the CCRB’s authority.” Darche encouraged the commission to consider the urgency of collecting evidence for misconduct investigations that rely on city resources like street cameras, where footage is routinely taped over.

The NYPD commended its own steps toward increased transparency. Chernyavsky said that last year Police Commissioner James O’Neill gathered an external panel of criminal justice experts to assess the department’s internal discipline process, ultimately finding “no evidence of a lack of fairness.” The department still decided to act on a number of reforms suggested by the panel, like deliberation over the adoption of a standardized disciplinary matrix, according to Chernyavsky.

“The biggest problem has always been in CCRB’s lack of authority,” said Sisitzky.

Charter Commission Chair Gail Benjamin, former director of the City Council land use division and appointed as chair by Council Speaker Corey Johnson, along with Commissioner Alison Hirsh, vice president of 32BJ SEIU and appointed by Comptroller Scott Stringer, inquired about the disciplinary procedure for “peace officers.” The experts generally agreed that the city lacks an adequate oversight system for these 5,000 officers, but Darche said that the CCRB lacks the resources to oversee peace officers.

The hearing’s most polarizing issue came from Pamela Monroe of the Campaign for an Elected Civilian Review Board. Monroe asserted that the “CCRB has failed,” and instead proposed a board of 21 elected officials “responsible to their district and answerable to New Yorkers.” The members would serve four-year terms that coincide with mayoral and City Council elections, she explained. The campaign has not yet determined if candidates should run along party lines or in nonpartisan elections. Monroe’s testimony drew fervent applause from the audience, which was largely composed of the campaign’s supporters.

Commissioner Rev. Clinton Miller, who was appointed by Speaker Johnson, asked for details, and Hirsh and several other commissioners inquired about the necessity for elected officials on the CCRB and expressed concern over how the NYPD’s political power could sway these elections in the department’s favor and potentially prevent new accountability reforms. “New Yorkers deserve to have the people represent them,” Monroe answered. Local elections are a tenet of democracy, she explained, and espoused her campaign’s belief that the current CCRB is reflective only of the politicians who appoint them, rather than the city at large.

While Brian Corr of the National Association for Civilian Oversight of Law Enforcement, reinforced Hirsh’s concerns over how police unions may wield their political clout in an election, most other experts declined to take a position on the issue as members of their organizations were still deliberating the idea.

Commissioner Sal Albanese, a former City Council member and appointed by Brooklyn Borough President Eric Adams, challenged many of the suggested reforms throughout the hearing. Albanese celebrated CCRB’s progress from when NYPD officers served on the board, which changed to its current all-civilian structure 26 years ago under the David Dinkins mayoral administration. He also extolled more recent reforms, including the installations of an inspector general and a federal monitor within the NYPD roughly five years ago.

“Are these things not working?” Albanese asked, to laughs from both the audience and the panel.

Corr later told Albanese that large cities need a body independent of the police department with checks on its power from the mayor and City Council, empaneled with “people who are trained in civic oversight, who understand investigations and can also look at systemic issues.”

Commissioner Stephen Fiala, the Richmond county clerk and appointed by Staten Island Borough President James Oddo, asked several experts to detail their complaints with the 2012 Memorandum of Understanding that broadened oversight of the NYPD.

Many experts lamented the lack of any measure compelling the NYPD to provide a public rationale in instances of non-concurrency between the department and the CCRB on disciplinary measures, despite provisions in the 2012 MOU that suggested the NYPD would disclose these explanations. Ethan Geringer-Sameth explained that Citizens Union has had to wield legal action to unveil certain NYPD decisions. “The fact that it’s not public now,” Kang said “really shows how the NYPD has been allowed to make their own rules.”

Commissioner Carl Weisbrod, a Mayor Bill de Blasio appointee, asked the CCRB and NYPD representatives why the MOU “shouldn’t be codified, given the fact that it has stood the test of time.” Darche called the memorandum a “template for charter revision,” while Chernyavsky said that the MOU maintained police commissioner power because those who occupy that position worked through all levels of the police ranks, giving them important perspective on issues of police misconduct.

Issues of police mistrust within communities of color were debated during the second panel. Albanese asserted that polling shows people of color generally trust police officers, while Manhattan Community College professor Liza Chowdhury said she had not heard of these polls and spoke of historical over-policing in neighborhoods of color, drawing enthusiasm from demonstrators in the crowd who carried photographs of African-American men who have been killed by NYPD officers. Fiala, meanwhile, agreed the NYPD must improve its relationship with civilians, but blamed a lack of trust on a general trend toward suspicion of institutions.

Cynthia Conti-Cook of the Legal Aid Society recommended implementing a conflict counselor position within the CCRB to serve as independent legal representation for clients, rather than the standard set by New York City Law Department’s interpretation of state Civil Rights Law 50-a, which she deemed “the crux of the problem.” The state law, she explained, requires attorneys advancing complaints against police misconduct to delineate why they believe misconduct exists, but blocks their access to disciplinary documents from the NYPD. Defense attorneys, Conti-Cook said, are “arguing in the darkness.”

Chernyavsky advocated for amendments to 50-a that would permit the release of information in the public interest––including officer names, trial transcripts, decisions and disciplinary outcomes––while maintaining safeguards “aimed at protecting officers against harassment.”

“Commissioner O’Neill,” Chernyavsky said, “has attempted to be more transparent within the bounds of the existing law,” noting the decision to release body camera footage and CompStat data. “We can have both. We don’t need to throw away the safeguard that are afforded to our officers at the cost of transparency.”

Many experts and commissioners shared a desire to see a police force that demographically better reflects the communities it serves (which has been the trend in the NYPD), and the need to confront trauma both in neighborhoods that have experienced police brutality and within the police force.

Representatives from the NYPD did not propose any charter amendments.