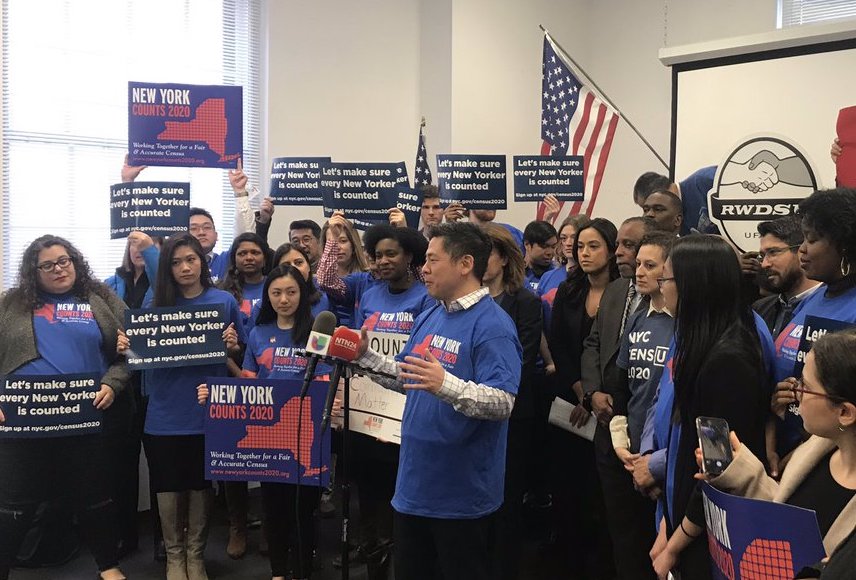 The new state budget agreement between Governor Andrew Cuomo and the state Legislature includes $20 million in U.S. Census outreach funding, half of what community advocates say is needed to ensure an adequate count of New York’s population next year. The budget that came together over the weekend and was voted through by the two legislative houses early Monday immediately took effect, given the April 1 start to the state fiscal year.

The $20 million in state census funding is for the year leading up to when the official count begins, coincidentally, on April 1 of next year. Governor Andrew Cuomo had not including any census outreach funding in his executive budget proposal earlier this year. As advocates and some lawmakers pushed for $40 million in funding to be included in the state budget, the final spending plan included half that amount. On Monday, one year from the start of the count, the New York Counts 2020 coalition and New York City Office of the Census held a day of action across the city, with disappointment about the state funding figure hanging over the effort, but having no apparent impact on the enthusiasm of the activists involved.

The Census, the constitutionally mandated decennial population count, is expected to be particularly challenging in 2020, raising concerns of a significant undercount in New York. The federal government is underfunding the U.S. Census Bureau, hiring far fewer enumerators than the last count in 2010. The census is shifting to a primarily digital methodology, encouraging households to fill out the questionnaire online, which could lead to lower response rates by older populations and in communities that lack access to the internet.

And New York is home to large populations of immigrants, including undocumented immigrants, who are less likely to respond to the census, a trend that could be particularly acute under the Trump administration, which has fostered and promoted a heightened atmosphere of fear in those communities. Those fears are exacerbated by the administration’s attempts to include a citizenship question on the census, which is the subject of a legal fight that will be heard by the United States Supreme Court in three weeks (President Trump himself pushed for the question on Twitter Monday).

All those factors combined could spell disaster for New York State. An undercount could lead to significant cuts in federal funding -- New York receives as much as $80 billion annually -- and could result in the loss of two seats in the House of Representatives (the loss of one seat is expected given broader population trends).

New York Counts 2020, a coalition of advocates and issue-focused organizations, has been pushing the state to provide at least $40 million in funding to help reach hard-to-count communities. But state action has been slow and unsatisfactory, advocates have said. Besides the level of funding of outreach efforts, the state was also late to create a commission to examine census issues. It blew past a deadline to issue a report.

On Monday, the New York Counts coalition partnered with New York City’s Office of the Census, headed by director Julie Menin, and hundreds of volunteers in a day of action to mark one year till the 2020 Census kicks off. “Given the state's disappointing $20 million investment in Census outreach, we must work twice as hard,” on outreach efforts, said Steven Choi, executive director of the New York Immigration Coalition, which is a facilitator of the larger coalition, in a statement.

“Our share of over $800 billion of annual federal funding and our voice and power in Congress are at risk, and the stakes could not be higher,” Menin said in a statement.

While the state has been lax in its efforts, the city has been far more proactive. De Blasio’s January appointment of Menin to head the city’s census office was followed later that month by New York City Council Speaker Corey Johnson’s announcement of a 2020 Census Task Force, chaired by Council Members Carlina Rivera and Carlos Menchaca.

In an op-ed in Gotham Gazette on Monday, Rivera and Menchaca also expressed disappointment that the state hadn’t provided the funding needed for adequate outreach. “We need more details about how this funding will be distributed and will keep fighting to ensure that community based organizations in New York City get the funding they need to get an accurate count locally,” they wrote.

A new city budget, due by July 1, will offer city officials an opportunity to put more money behind outreach efforts in the five boroughs.