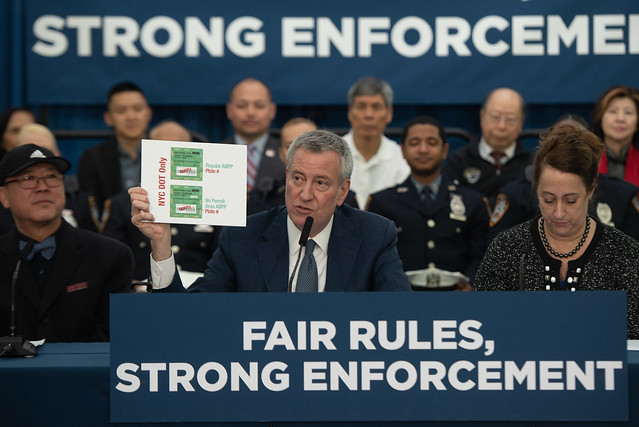 When Jeff Novich wanted to report a honking taxi outside his apartment in 2014, he did what most New Yorkers do when making noise complaints. He filed an online report with 311.

It was the start of an ongoing relationship with the now 16-year-old city service, which in 2018 handled over 20,000 daily phone calls and 3 million individual reports equaling more than 44 million interactions in total. The service’s 400-plus employees handle everything from noise complaints to dispensing daily parking updates and inclement weather advisories via the 311 call center and app, as well as text messages and social media.

“I was annoyed [about the taxis] and wanted to do something about it, and I learned about 311 and the Taxi and Limousine Commission,” Novich said in a phone interview. “These complaints don’t fall into a black hole, and there’s a lawyer at TLC, and there’s real action.” When filing his online complaints, however, Novich realized the 311 website didn’t have TLC-specific complaints – back in 2014, 311’s reporting options were more limited than they are today.

As a product manager for tech companies, Novich spends his days creating and implementing user-friendly technology solutions. He decided to create his own solution for TLC-specific complaints: a mobile app called Reported. “A year and a half later, I have an email from the director of 311 saying we added that capability into the 311 app, largely inspired by the Reported [user experience]. And that changed the trajectory of the app,” said Novich.

Since then, Reported has evolved into an easy-to-use collection point for New Yorkers who spot and submit evidence of TLC, commercial, and private vehicles blocking bike and bus lanes.  It takes less than a minute to submit a report, making it far quicker than direct 311, and the app keeps each user informed of its status, including the outcome of any TLC court hearings. The app empowers, as Novich puts it, the most vulnerable road users to hold drivers accountable for dangerous behavior.

In 2018, over 4,500 complaints were filed on Reported, which generated approximately $380,000 in revenue for the TLC as the result of fines imposed on drivers. According to Novich, complaints submitted through Reported represent 15 percent of all 311 complaints filed to TLC last year.

The Reported app is an example of New Yorkers taking matters – including the city’s open data – into their own hands, creating ‘civic tech’ to serve their needs and better understand their surroundings. While 311’s adoption of it was a major milestone for both parties and the public, some say the service is still woefully behind in its modernization.

A City Council oversight hearing in February highlighted the differing response times by agencies to 311 complaints. The Department of Buildings, for example, prioritizes their 311 complaints by threat level to public safety, taking anywhere from nine hours to over 90 days to resolve one complaint. A new version of 311 is expected to launch later this year, but it’s not clear how updated its capabilities will be in terms of accepting photos with complaints.

Open data is defined as “Free public data that is published by New York City government agencies and a few other government adjacent partners, like libraries and the housing authority,” said Adrienne Schmoeker, deputy analytics officer for the Mayor’s Office of Data Analytics (MODA).

New York City’s open data law has been on the books since 2012, and updated since. It requires a great deal of public data to be made available at a single internet portal. The law was strengthened with requirements to make all open data available in perpetuity and the inclusion of dictionaries to clarify the available data sets.

Currently, over 2,000 data sets are available on the Open Data portal, with 311 contributing nearly a decade’s worth of complaints and geotags to the city’s collection. “Open data isn’t going to go away depending on the administration,” said Schmoeker. Neither is MODA. The office was added to the city charter through a City Council bill passed in December 2018, making data analytics an official part of City Hall.

Open data is important in modernizing governments, which according to Schmoeker are centuries-old enterprise-level organizations, and have pain points and legacy systems (such as 311, though it is much newer than other systems) requiring updates. “Modernization means that more and more data is going to be collected, ideally in a responsible way, thinking about not collecting data for data’s sake, but for the purpose of improving services to New Yorkers and making as much of that data available back to the public as possible,” said Schmoeker.

When a user submits a blocked bike lane report with Reported, the app combines that information (license plate, where the violation occurred, and the date) along with additional data accessed through the city’s open data portal, which verifies if the vehicle is TLC-registered, i.e. a yellow or green taxi, among other functions. After merging the user-submitted info with the backend data, the final actionable report is submitted to 311.

311’s data is also of interest to Alec Barrett, a lead developer for data visualization studio Two-N. Last month, he led a session on 311 data visualization at School of Data, an annual open data, civic tech, and design conference sponsored by BetaNYC, an independent civic tech organization, in partnership with MODA. “311 data is generated by citizens directly. Using it you can see evidence of problems being solved, or if something is an isolated incident,” said Barrett.

One of those problems, according to Manhattan resident, Community Board 6 representative, and Reported app user Rich Mintz, is parking placard abuse. It’s an ongoing issue of city employees exploiting their status by parking illegally, and mostly not getting ticketed for it. Some drivers use placard proximations, like NYPD patrol manuals or MTA vests, to park illegally, and often get away with it.

Currently, five separate bills designed to curb placard abuse have been introduced to the City Council, and Mayor Bill de Blasio recently announced a second round of plans to fight the problem, after his first effort proved unsuccessful.

The Reported app collects photos, but 311 currently doesn’t accept them – and placard abuse is supposed to be enforced by the NYPD. Mintz blames some of the lack of enforcement on 311’s inability or unwillingness to accept photographic evidence of placard abuse. “What happens is when the police close a [311] ticket saying they didn’t observe the violation, there’s no way to respond to that with clear photographic evidence,” he said.

It appears to be indicative of limitations not just with open data, but with 311’s lack of authority to more fully address issues like placard abuse. “311 reports, as imperfect as they are, seem to be the only way we have of lighting a fire under the police precincts,” he said. “I would say almost all the TLC complaints are resolved to my satisfaction. They do an excellent job of tending to these reports that are safety violation reports. The problem is the NYPD.”