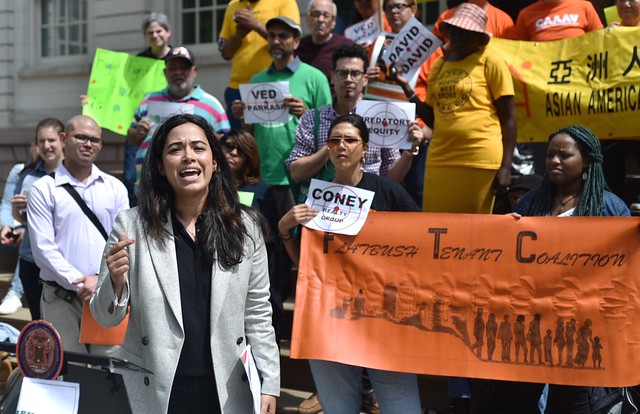 Manhattan City Council Member Carlina Rivera is part of a growing coalition of Council members pushing for city government's first major commitment to a seldom-utilized affordable housing model. In the face of rapid gentrification, they say, the city should invest $850,000 in Community Land Trusts, or CLTs, in the city budget currently being negotiated.

Doing so could help advocates and nonprofits acquire land to operate deeply affordable housing and amenities -- albeit on a small scale -- in perpetuity.

“They're not a silver bullet but should be a major component of any affordable housing plan,” Rivera told Gotham Gazette. Other allies include Queens Council Member Donovan Richards and Manhattan Council Member Margaret Chin.

A Community Land Trust is a nonprofit that acquires and manages land, either one continuous plot or scattered sites. People who live and work on the land collectively set the terms of use, and can mix residential and commercial space with community centers and gardens. Most CLTs prohibit their properties from ever being sold for profit, ensuring affordability in the long term.

There are currently 11 community-based organizations with CLT projects underway across the five boroughs. Though several are still in early planning stages, groups hope to ultimately control thousands of housing units and hundreds of small businesses citywide.

A new $8 million bank settlement from Attorney General Letitia James is also being parceled out this spring to land trust projects across the state. Municipalities can apply for up to $2.5 million each. “The interest in CLTs has expanded a lot,” said Elizabeth Zeldin, director of Enterprise Community Partners, which is distributing the funds.

New York City’s oldest CLT model, the Cooper Square Mutual Housing Association, is in Council Member Rivera’s district. It has grown to nearly 400 apartments and 20 small businesses since its formation in 1994 (including one of Rivera’s personal favorites, Pageant Print Shop, which sells antique prints and maps). “I think we have to plant seeds for these CLTs to grow,” she said. “They can ward off mass speculation of developers, like happened in Cooper Square.”

With citywide elections on the horizon in 2021, “Every front-runner in every office race should be discussing this as part of their affordable housing platform,” Rivera said.

Rivera’s spokesperson, Jeremy Unger, told Gotham Gazette that “the Councilwoman is planning a Council briefing on CLTs” and will be discussing the model during internal deliberations as the Council prepares to negotiate with the mayor’s office.

“We look forward to working with the City Council throughout the budget process and will evaluate the proposal from CLTs,” de Blasio spokesperson Raul Contreras said in a statement to Gotham Gazette. (The Council recently held a month of preliminary budget hearings, then issued its official response to the mayor’s initial budget plan for fiscal year 2020, which begins July 1.)

Barriers to CLT expansion include limited funding for housing development and renovation, and limited access to viable land. The model stands in contrast to de Blasio's 300,000-unit affordable housing plan, which predominantly enlists large for-profit developers to construct and preserve mixed-income housing on a large scale.

Council members have contributed to individual land trusts in their districts over the years. But the $850,000 ask would contribute to a broader project, organizers say, covering hiring costs for one staff member for each community group currently developing a land trust, plus technical and legal assistance.

With this funding, says Deyanira Del Rio, co-director of the New Economy Project and board chair of the New York City Community Land Initiative, CLTs can "deepen the organizing, education, and partnership development," so they can acquire and rehab properties down the road.

Del Rio draws a comparison to the city’s Worker Cooperative Business Development Initiative, which has seen worker-run businesses more than double from 21 to 48 since the City Council started funding it four years ago.

The East Harlem El Barrio CLT, one of the more established in the bunch, is currently closing on a portfolio of four residential buildings in East Harlem with 36 apartments among them. The buildings are in poor condition, and the CLT is negotiating additional preservation assistance from the city’s Department of Housing Preservation and Development (HPD).

“With the Second Avenue Subway coming through,” says El Barrio project coordinator Athena Bernkopf, “there are concerns about what that will do to the housing and economic landscape.” Ultimately, the CLT hopes to add more buildings “facing immediate gentrification pressure.”

Other CLTS are in earlier planning stages. Chhaya CDC, a non-profit serving the city’s South Asian Community in Queens, hopes to establish a land trust in Jackson Heights to manage affordable community space and shops. While CAAAV Organizing Asian Communities envisions a land trust in Chinatown with affordable senior housing and storefronts for immigrant-owned businesses.

HPD began working with affordable housing groups and nonprofit developers to study the viability of CLTs in the summer of 2017, distributing a $1.65 million grant from a $3.5 million bank settlement from then-Attorney General Eric Schneiderman. Part of that initial funding covered a two-year program called the NYC CLT Learning Exchange, organized by the New Economy Project, where community groups met regularly to learn about the model.

Now, says City College of New York Political Science Professor John Krinsky, groups will begin to delve into the inevitable challenges of working together to decide how a piece of land will be used and operated. For example, “What are the tradeoffs when we are thinking about financing and affordability, and what that means in the long term?”

Down the road, advocates are hopeful that New York City will establish a pipeline of land for CLTs, and more long-term financing tools to support extremely low-income households. “I think we have to be looking at vacant lots,” Council Member Rivera told Gotham Gazette. While the city’s reserve of such lots has been dwindling over decades, there are still dozens that can be utilized for housing, with many in the pipeline for development through HPD.