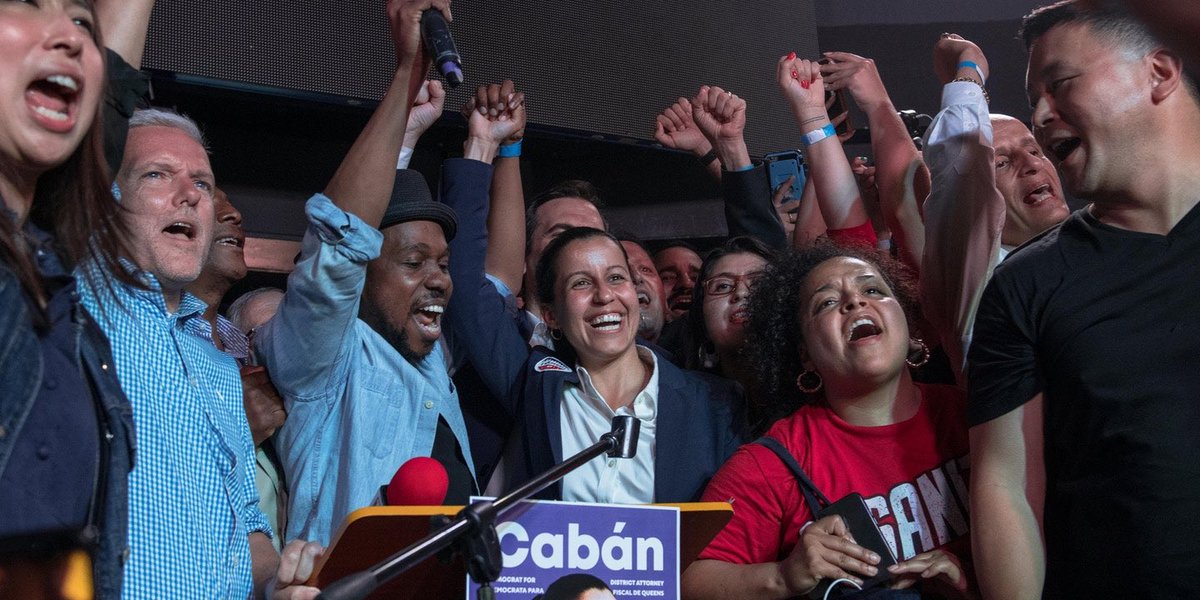 Public defender Tiffany Cabán, a self-described “31-year-old queer Latina” originally from Richmond Hill, appeared to pull off a stunning upset victory on Tuesday in the Democratic primary for Queens District Attorney. If the counting of a few thousand absentee and other final ballots stays true to her roughly 1.5% margin over apparent second-place finisher Queens Borough President Melinda Katz, Cabán will be the heavy favorite to win the general election and take over as District Attorney in January, the first newly-elected Queens DA in almost 30 years.

Cabán declared victory Tuesday night, while Katz declined to concede and said every vote must be counted. In her remarks to a packed and jubilant crowd -- chanting “Tiffany,” “Black Lives Matter,” “No new jails,” “AOC,” “DSA” and more -- at La Boom in Woodside, Cabán reiterated key planks of her insurgent campaign, in which she promised nothing short of a complete overhaul of the Queens District Attorney office and how criminal justice is meted out in the borough of more than 2 million people.

“We can’t have people sitting on Rikers simply because they cannot afford their bail, while the wealthy continue to be provided their constitutional right to the presumption of innocence,” she said Tuesday night. "We built a campaign to reduce recidivism, to decriminalize poverty, to end mass incarceration, to protect our immigrant communities and keep people rooted in their communities through access to services and support."

"We will need to build bridges with communities that have understandably been distrustful of the District Attorney’s office," Cabán said,  while also promising to be a DA for those who did not vote for her.

"I want to be very clear: nothing, nothing is more important to me than the safety of all people who call this borough home,” she said toward the end of her remarks. “We are going to center community solutions, and invest in healing and stabilizing lives. The changes that we are fighting for will be a fairer, more equitable, more efficient criminal justice system. And that doesn’t come at the cost of our safety, that is the source of safety."

But what exactly did Cabán promise throughout her campaign? What were the planks of her platform that energized thousands of volunteers and tens of thousands of voters?

“For me, my decision to run in this race very much so feels like the natural progression of my advocacy for my clients,” Cabán said in a February interview with Gotham Gazette. Below are 20 more specific things she promised to do if elected Queens District Attorney:

3. Hold police officers accountable for breaking the law, including for lying under oath. She told the Queens Daily Eagle she would publish the DA office's list of officers who have credibility and misconduct problems, and may be liabilities if put on the stand in a case.

4. Decriminalize drug use “that does not pose a threat to others,” including but not limited to marijuana. “We’re going to decriminalize marijuana and invest in services for substance use disorder, not fight a failed war on drugs,” she said in a June 19 tweet.”

5. Support the creation of supervised injection sites, according to her Jim Owles Club survey. Provide naloxone, overdose training, and outreach to reduce overdose deaths, according to her campaign website, and bring companies that deliberately overprescribe drugs to court.

6.Bail reform.
-End cash bail for all offenses. “Cash bail is wrong—period. We can’t have two systems of justice: one for the poor and one for the wealthy,” she tweeted. And implement prompt automatic bail reviews.
-Cease use of risk score algorithms which are “based in...racist and classist ideas,” as she said in a May 3 candidate forum.

7. Fight for open file discovery – “it speeds up cases, it’s what’s fair, it provides closure for survivors and victims of crime much earlier, ” she said in a tweet from February.

8. Pursue shorter felony sentences and never pursue life without parole.
-Advocate for legislation to review sentences of those over 55 who have been incarcerated for over 15 years – a “top priority in my office,” according to her survey for the Jim Owles Club, which endorsed her. “The goal should be on rehabilitation and safety – not on punitive, overly-lengthy sentences that do little to safeguard community stability,” she wrote.
-Presume shortest possible sentence, exceptions are to raise length of sentence – not the other way around, she said at a May 3 Players Coalition forum.

10. Consider defendant’s ability to pay in imposing fees and fines, according to her campaign website.

11. Give money obtained from legal proceedings to housing, job, and education services, which “evidence shows actually reduce crime,” according to her campaign website.

13. Create a Retroactive Release Unit “so that we are making sure that we are not unnecessarily keeping people incarcerated for offenses that we recognize really should be treated with treatment or supportive services,” she said in a June interview with PIX11.

14. Create a Record Review Unit to clear the record of those in prison for no-longer-prosecuted offenses, according to her campaign website.

15. Create a Reentry Services Unit to help the recently-released and reduce recidivism, according to her campaign website, “because 97 to 98 percent of people who are removed from their community reenter their communities no better than what they were, [and] in fact oftentimes worse,” as she said in an interview with New York Magazine.

17. Prosecute ICE agents who engage in abusive conduct, according to her campaign website, and “Ban ICE from our courtrooms, not let them terrorize our neighbors,” she tweeted on June 19.

18. Help close Rikers Island jails, “faster than the proposed timeline,” with no new jails built in its place. “Every time new jails are built throughout this country's history, they are filled, she’s said. She promised to fight instead for “significantly smaller, better equipped community based jails next to court houses,” according to her Accountability survey.

19. Hold quarterly town halls, per her Accountability survey, and create a Community Advisory Board, according to her website.

20. Exit the District Attorney Association of New York. “I will exit DAASNY & work instead with DAs who share our values,” she said, due to DAASNY’s opposition to open discovery. “These associations tend to have regressive, racist, and classist “tough on crime” mentalities,” she wrote in an Accountability survey.