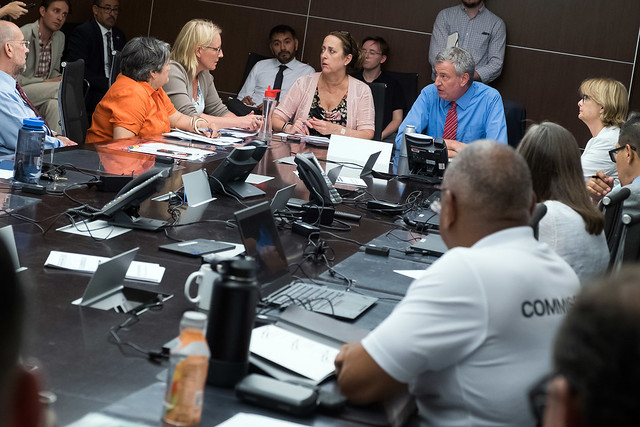 Mayor Bill de Blasio released the latest Mayor’s Management Report, an exhaustive document  of data behind city government -- the metrics the city uses, at least in theory, to determine whether government services are being delivered effectively and that the public can use to hold city government accountable. The report is broken down by agency, with each listing a set of broad goals, the progress toward which is illustrated by indicators.

The dense report covers data for fiscal year (FY) 2019, which began July 1, 2018 and ended June 30, 2019, and includes comparative data from fiscal years going back to FY15, the first full fiscal year of de Blasio’s mayoralty. Forty-five municipal agencies contribute to the report, which is aggregated under the Mayor’s Office of Operations.

Captured in its numbers are the contours of various aspects of life in the biggest city in the United States. Gotham Gazette went through many of the indicators -- ranging from the headline-grabbing to the obscure -- that illustrate, in part, how city government is doing.

Outlined below are metrics in key categories like education, children’s services, housing and homelessness, policing, jails, transportation, and sanitation. (There are dozens more areas of the report that are not included here -- to learn more about the city’s performance according to the mayor’s office, find the report here or visit specific sections using this navigation page.)

Education
In FY19, approximately 1,126,500 students were enrolled in the public school system from pre-kindergarten through twelfth grade (not including charter school students). This is roughly 4,000 more students than in FY15, but about 9,000 fewer than in the previous fiscal year.

Average class sizes for kindergarten through eighth grade have stayed roughly the same over the last five years.

Based on state test scores, students in grades three through eight are doing far better in math and English language arts than they were in FY15. Last year, 45.6 percent of students met or exceeded math standards, up roughly 10 percent; for English language standards, that number was 47.4 percent -- up 17 points since FY15. But, the tests have changed significantly over the last few years, making FY19 to FY15 comparisons limited in value.

The Mayor’s Management Report does not include metrics on school diversity or racial, ethnic, or economic segregation in city schools.

Child Welfare
The Administration for Children’s Services reports families entering child welfare prevention services has decreased over the last five years from roughly 11,000 to 9,960. Children entering foster care has also fallen, from 4,233 in FY15 to 3,729 in FY19.

Housing and Homelessness
Of the roughly 60,000 people in homeless shelters across the city, the average number of single adults in shelters daily has risen every year over the last five years, from roughly 11,000 in FY15 to 16,000 in FY19. The daily average in the most recent year of reporting is more than 1,000 greater than it was the year before. The average number of families without children living in shelters every day has also risen year after year -- from 2,110 to 2,510. The averages for families with children is far greater -- 12,415 in FY19 -- but has stayed relatively constant over the last five years.

Under the mayor’s Housing New York plan to create or preserve 300,000 affordable housing units over 12 years, the process to construct new or preserve existing “affordable” (meaning rent-regulated in some way) apartments began on just over 25,000 units, meeting the administration’s stated goal for FY19. Another 18,200 units were completed under Housing New York and another initiative started under Bloomberg called the New Housing Marketplace Plan.

Under Housing NY in FY19, the city began financing 2,682 affordable units geared specifically toward homeless individuals and families. Another 1,968 will serve senior households.

The New York City Housing Authority (NYCHA), reports 173,000 apartments in public housing developments, down 3,000 from FY18 and 5,000 from FY15. The occupancy rate for NYCHA housing is 98.9 percent. About 2,450 homeless individuals who applied for public housing either in NYCHA or through Section 8 vouchers were placed. That number has fallen every year since FY16 from a high of 2,868.

Policing
The New York Police Department (NYPD) reported a roughly 10 percent decrease in major felony crimes over the four years: 93,631 in FY19, down from 103,872 in FY15. Major felony crimes include murder, rape, robbery, assault, burglary, and grand larceny. Notably, despite this overall drop, reports of forcible rape have increased relatively steadily (with a small drop between FY16 and FY17); 304 more cases were reported in FY19 than in FY15, an increase of about 29 percent.

The number of non-violent “quality-of-life” summonses has also fallen to less than half of what it was in FY15. According to the report, the summonses are issued for “offenses that have a negative impact on City residents, including unreasonable noise, aggressive panhandling, window washing, and urinating in public.” The greatest drop -- almost 40 percent -- took place between FY17 to FY18. They were down another 24 percent in FY19, to 128,265 summonses. This trend was in large part spurred by the Criminal Justice Reform Act.

The report does not reveal much about “customer service” for people interacting with police. The police department reported 275,981 completed requests for interpretation, roughly the same as in FY15 (but a five percent drop from FY18). Yet, the report does not indicate how many interpretation requests were made, so it is difficult to assess the department’s overall performance. For the first time since FY10, the police department also did not report a CORE (Customers Observing and Reporting Experiences) facility ratings, which measures physical conditions and the quality of service in walk-in facilities.

There were 844 more complaints against uniformed police officers to the Civilian Complaint Review Board, an oversight body tasked with investigating and prosecuting certain types of officer misconduct, in FY19 than the previous fiscal year -- a nearly 20 percent increase. FY15 had over a thousand fewer complaints than in FY19, a change of almost 26 percent over five years.

The time it takes the CCRB to complete a full investigation also increased, which the report says is consistent with the heightened number of complaints and the increased use of body-worn camera footage in investigations. “The amount of time it takes to obtain footage has also significantly contributed to the increase, as does instances where false negatives or false positives necessitate multiple follow-up requests,” the report also notes.

The police department reports paying $178 million in settlements or verdicts in state and federal court in FY19. The reported payout in FY15 was higher: $202,600,000.

Jails
The number of people in Department of Correction custody has declined steadily during de Blasio’s mayoralty, from average daily populations of 10,240 in FY15 to 7,938 in FY19. While the jail population has decreased, violent incidents among detainees and guards as a proportion of the total detainee population have risen dramatically. In FY19, there were about 70 violent detainee-to-detainee incidents per 1,000 people in custody, compared with just 38 in FY15 and 56 in FY18. Assaults on staff increased from roughly 9 to 13 per 1,000 detainees over the same five-year period.

Transportation
There were nine more traffic fatalities in FY19 than the year before, but 31 fewer than in FY15. There were over 223,000 crashes in FY19 (422 involved Department of Transportation vehicles).

Fatalities among cyclists and pedestrians between FY15 and 19 have dropped overall from 159 to 137, but between FY18 and 19 they rose by nine. The city installed 67.5 miles of bike lane in FY19. That is significant growth from FY15 when roughly 51 miles were installed, but a drop from FY17 when nearly 83 miles were built.

Annual CitiBike memberships have more than doubled over five years to a high of 154,830 in FY19. And while bike ridership overall has picked up over five years, the number of adults who ride regularly fell by about 6,000 between FY18 and FY19.

The number of accessible medallion taxis has nearly quintupled in the last five years, coming to over 2,700 accessible cabs in FY19. There are only 579 accessible for-hire vehicles, such as through Uber or Lyft app-based services, and this is the first year the data from the Taxi and Limousine Commission has been included it in the Mayor’s Management Report.

Yellow and green cab safety and emissions inspections have dropped, with only about 32,000 taking place in FY19, compared to 48,000 the year before and 52,000 in FY15. The percentage of inspections completed on schedule also dropped dramatically to 55 percent in FY19 from the mid-nineties in all other years. At the same time the failure rate rose almost seven percentage points last year to 33.6 percent, while the re-inspection rate dropped a point to 6.1 percent.

It seems much of that effort has been transferred to safety and emissions inspections for the app-based for-hire vehicles. In FY19, 84,000 FHVs were inspected, compared to 47,000 in FY15, of which 96.8 percent were completed on schedule. About 29 percent fail the initial inspection, and only 8.4 percent are re-inspected.

Sanitation
The Department of Sanitation reportedly disposes of 3,248,100 tons of refuse annually, a two percent increase from FY15. The department handled 868,000 tons of recycling in FY19 at a rate of 2,783 tons per day.

The Mayor’s Management Report did not provide data on the costs per ton for refuse and recycling collection and disposal, though those prices in almost every case have risen every fiscal year for at least the last five. Collecting recycling alone costs $706 per ton, up from $645 in FY15. (The city does, however, earn $12 per ton in revenue for paper recycling.)

The report does not include data on street and sidewalk cleanliness for the first time in at least the last five fiscal years, while quality-of-life issues are a stated priority of de Blasio’s Deputy Mayor of Operations, Laura Anglin.