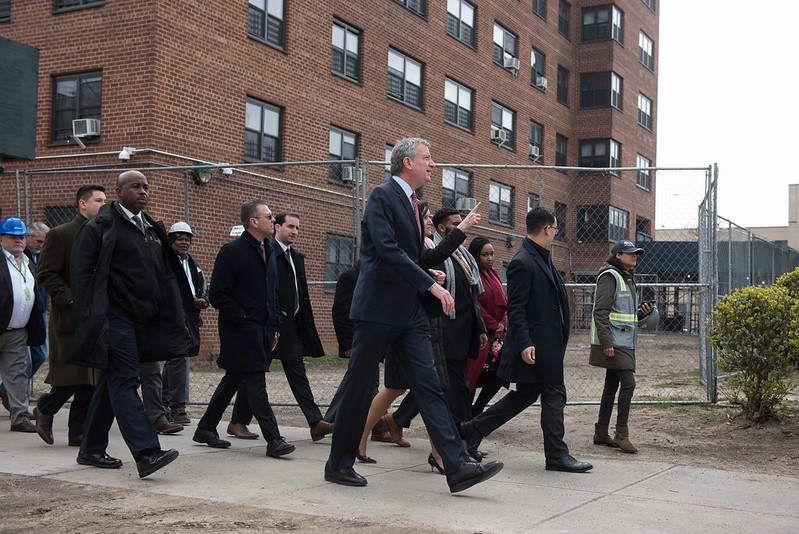 It is taking more time than promised for the city’s property tax reform commission to come out with its initial and final reports with recommendations for changes to the antiquated and unfair system, a delay that threatens to undermine the de Blasio administration’s footing in Albany, where many of the changes would need to be made.

The Advisory Commission on Property Tax Reform, created by Mayor Bill de Blasio and City Council Speaker Corey Johnson in 2018, was expected to issue a preliminary report with recommendations this past summer, followed by a round of public hearings and a final report by the end of the year, to serve as the city’s basis for advocacy in the state capital. But officials now say the commission’s preliminary report will be published “soon,” staking out an indefinite wait that may pose a challenge to achieving a city-driven reform agenda in the 2020 state legislative session, which begins in January.

“This commission is coming back this year with recommendations,” de Blasio, a Democrat, said on WNYC radio in July, responding to a caller. “Two things then happen: some will be part of city law...and the other has to be done by state law. The state legislative session begins in January. We’re coming up to the point where these things are going to be put on the table and resolved.”

In a September letter to the editor in Crain’s New York Business, Deputy Mayor Vicki Been, who previously served as the property tax reform commission’s co-chair before returning to the de Blasio administration, wrote, “The mayor will not wait; he will be in Albany next session pushing for this historic reform.” (The assertion came days after a Crain’s event where Been said it was not “realistic” to achieve property tax reform before de Blasio leaves office at the end of 2021.)

That reassurance now appears far less solid given delays in releasing the preliminary report. Commission Chair Marc Shaw told Gotham Gazette this month that the body had made “significant progress” but a few issues remain that are holding up publication.

A spokesperson for Johnson, a Democrat, told Gotham Gazette the commission still intends to hold hearings to solicit public feedback once its initial recommendations are out, which will influence the final report. But the hearings will not be scheduled until after the preliminary report is made public, the spokesperson said.

With just over two weeks until session begins in Albany, it is virtually impossible that the city will have a comprehensive property tax reform plan to push when the political action and agenda setting gets fully moving (Governor Andrew Cuomo has already begun laying out his 2020 priorities ahead of his January 8 State of the State speech).

Asked about the commission's work and the path ahead at a press conference on Thursday, Johnson acknowledged that it is behind schedule and that the prospects for changes being passed in Albany in 2020 were slim. He added that 2021 would be more likely, and he is hopeful that timeline can be met. Johnson said he is encouraged by what he's seen so far from the commission and looks forward to the next steps.

"I think it’s an important thing and I hope that we make some very significant changes by the time I’m done being speaker,” he said. Like the mayor's, Johnson's term as speaker ends in 2021,

Much uncertainty remains in the city’s timeline for crafting and advancing its property tax reform agenda in Albany’s legislative calendar, which ends June 2 this year. Most of the action in Albany typically takes place in the lead up to the state budget, which is due by April 1 each year. De Blasio typically testifies at a state legislative budget hearing in Albany in early to mid February, at which time he lays out the city’s top state-level priorities, both policy and financial.

“We will have more to say soon,” wrote Laura Feyer, a spokesperson for de Blasio, in an email.

City Council Member Joe Borelli, a Staten Island Republican, has made property tax reform a priority in recent years. “While glad the report is finally moving, I imagine the timeline will make it tough for a deal to come out of Albany this session,” the former Assembly member wrote in a text message to Gotham Gazette.

“Pushing back a session year, considering our NOPV’s must go out early in the year, means that NYC residents won’t see a correction before fiscal year 2022 at best,” he added, referring to the city’s Notice of Property Value, which influences how much is assessed in real estate taxes.

New York’s current system was written into state law in 1981 and for decades the city’s property taxes have been criticized as onerous and unequal. While the city has control over the tax rate and certain levy practices, state law dictates some of the most fundamental assessment criteria, a number of which contain major flaws, experts and stakeholders say.

Because real estate taxes impact virtually every constituency, changing a system that benefits some at the expense of others has come with political challenges. As the state’s largest municipality, New York City plays an outsized role in any conversation around property tax reform in Albany.

State Senator Brian Benjamin, a Manhattan Democrat, views the city as a key partner in hammering out changes to the system, but as chair of the Senate’s committee on budget and revenues, he has been hampered by the city’s shifting timeline.

“I was originally of the impression that the preliminary report would have been out before I had had a public roundtable with a lot of leading experts. What I thought was happening was that we would have been able to use that time to look at the report and have some comments and thoughts,” he told Gotham Gazette, referring to a forum he held early this month.

“We are not prepared to have, at the last minute, something shoved down our throat,” he said.

Assemblymember Sandra Galef, a Westchester Democrat and chair of the Assembly’s committee on real property taxation, said the issues being discussed by the city advisory commission are not likely to sail through Albany, once recommendations arrive. She told Gotham Gazette she believes a number of the bills her committee may ultimately take up are likely to also have to go through other committees, like Rules, Codes, and Ways and Means.

“It’s not this quick turnaround, and it’s probably controversial, I would assume,” she said of the yet-to-be-seen recommendations.

As with this year’s session, Galef expects the pre-budget season to see a number of bills advance, as less can be done during 2020’s truncated post-budget period, adjusted due to a change in the election calendar that moved state primaries to late June.

“Once they do their major report they need to come back to us right away, given the fact that we’re out the first week of June. So I would say, if you’re looking for a deadline to get something done, it really has to be pretty much I would think the beginning of May,” she said, “and I don’t know whether that works for their timeframe.”

“It is our hope that the city would be able to provide us with something to look at with enough time to make some solid decisions before we leave,” said Benjamin.

Galef, who said the city is often “very slow in responding” to state legislation, would like to see the city “in some way, come to us with the preliminary report and give us an overview of what they’re thinking just so we start the process.”

Note: this article has been updated with Speaker Johnson's Thursday comments.