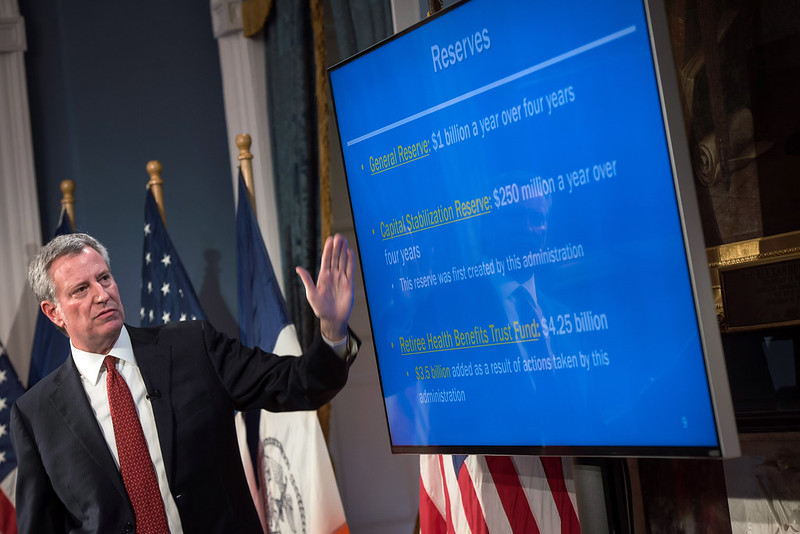 For his first six years in office, Mayor Bill de Blasio enjoyed the fruits of a booming economy and massively increased the size and cost of city government. But this week, he will present his executive budget proposal for the 2021 fiscal year facing a possible $6 billion revenue shortfall, hundreds of millions in cuts and cost shifts from the state, and almost complete uncertainty about the future as the coronavirus outbreak continues with New York City at its epicenter.

De Blasio’s preliminary budget proposal for the 2021 fiscal year, which begins July 1, was a $95.3 billion spending plan, up more than $20 billion since he took office in 2014. Year after year, the mayor has taken advantage of quickly growing tax revenue, increasing the municipal worker headcount by more than 30,000 and only paying lip service to finding savings and efficiencies at city agencies. Though his administration kept putting away money in reserves – nearly $6 billion for the current fiscal year – budget watchdogs warned that it would be insufficient to survive a sustained recession. What the city faces now is no mere economic downturn.

Coronavirus, estimated to have now killed more than 10,000 New Yorkers as of April 14, presents a fiscal crisis of unprecedented proportions. It’s unlike previous recessions, which had cost the city between $15-20 billion in lost revenue over three years. There is no clear end in sight to the crisis and no guarantee that even once it is over, the city will be able to bounce back as quickly as it did in the past. That has forced the mayor toward the first truly hard budget choices of his tenure.

The city has already found $1.3 billion in savings and cost re-estimates under a Program to Eliminate the Gap (PEG) that the mayor quickly instituted after the outbreak. But far from recurring savings, it includes programmatic cuts and delays that may not be sustainable, and some will be far from palatable to New Yorkers. It also reflects adjusted spending estimates as a result of the coronavirus’ impact on how city residents access local government.

For instance, the PEG includes a $100 million reduction in fair student funding, and $124 million saved by cancelling the Summer Youth Employment Program. It delays the expansion of the 3K for All program, temporarily reducing expenditure by $43 million. It includes $52 million that wasn’t spent on snow removal this winter, though there’s no guarantee that next year will be as mild a season. Another $106 million is meant to come from a hiring freeze and vacancy reductions at city agencies.

The mayor has even said the city may have to consider borrowing in the short-term to cover costs, for which it would need authorization from the state Legislature.

“[W]e've had to go through a really tough process around cuts to the budget and savings and PEG program,” de Blasio said at his daily coronavirus briefing on Tuesday, when he was asked about the prospect of seeking that authority from Albany. “But we're going to have to look at everything to figure out how we get through this.”

Mayoral spokesperson Laura Feyer would not say whether the city plans to draw on its reserves to cover costs for the coming year, among other details about cash-flows and prepayments that Gotham Gazette inquired about. “We will be presenting the budget this week and will have more to say then,” she said in an email. “One thing you can count on now and always: we are committed to keeping New Yorkers fed, safe, healthy and sheltered.”

It’s unclear what new savings or savings plans de Blasio will announce when he presents the executive budget this week.

There could be some relief, as the city is anxiously awaiting the next round of emergency funding from the federal government, which is currently being negotiated among Congressional leaders and the Trump administration and may be aimed at state and local governments experiencing steep revenue shortfalls. In media appearances on Wednesday morning, de Blasio emphasized that those funds will be crucial, particularly in ensuring that the city's emergency response mechanisms and services aren't hobbled. "We're not going to be able to provide basic services and actually have a normal society if we don't get help from the federal government so we can restart, so we can actually have a livable working city again," the mayor said on CNN's New Day. "If it doesn't come from the federal government, it's not going to happen. So Congress has got to get back and do a stimulus that helps cities, helps states, helps everyone get back on their feet and actually sustain a normal economy again."

But there is also the possibility of mid-year cuts from the state, with the recently-approved state budget allowing Governor Andrew Cuomo to periodically reduce spending if state revenues should come in below already-lowered expectations. As it stands, the budget could add several additional costs to the city’s books, including $200 million for healthcare, among others.

There are also new costs the city is accruing in fighting the coronavirus, such as additional spending on emergency food and related services. The city has already spent hundreds of millions of dollars on its coronavirus response, the mayor's office told Gotham Gazette.

In an analysis released March 23, city Comptroller Scott Stringer projected the city already faces losses of up to $6 billion in revenue between the current and next fiscal year from the economic effects of the coronavirus.

“The City should explore all budget actions that protect essential services, the social safety net, and our long-term fiscal health, and the federal government must step up with substantial financial support for New York City as the epicenter of this crisis,” said Hazel Crampton-Hays, a spokesperson for Stringer, in a statement to Gotham Gazette. “In that context, while it would be premature to rule out any specific course of action, we urge caution before the City engages in borrowing to cover operating costs, which would create debt service obligations that have the potential to crowd out funds for the very services and people we are trying to protect.”

The city often uses revenue surpluses at the end of the fiscal year to prepay certain costs, such as debt service, for the next fiscal year. As the comptroller noted in his analysis, the city expected a surplus of $2.7 billion, and if those funds are used to balance the budget, then next year’s budget gap would potentially increase to $4.5 billion, a number that would have to be closed by the time a spending plan is approved in June.

The City Council is the other key participant in the city budget process. A spokesperson for Council Speaker Corey Johnson said, “We are facing unprecedented budget challenges with rapid shortfalls in revenue and rising unemployment, but we must continue to deliver for the thousands of New Yorkers who rely on that social safety net, especially our most vulnerable populations: the elderly, homeless, disabled and low-income families. We are going to have to make very hard decisions about where to find savings and efficiencies. At this point, nothing is off the table.”

Johnson has said the City Council is working to develop ways to hold budget hearings digitally -- the Council was in the midst of its hearings on de Blasio’s preliminary budget when the coronavirus shutdown began. On April 7, Johnson and Council members who chair budget committees offered a formal response to the mayor’s budget, noting that de Blasio’s spending plan was released in early January when the city was in a very different place.

“The impact of COVID-19 on our economy has been much like the effect of the virus itself – sudden and with a quick decline,” said Johnson, Finance Committee Chair Danny Dromm, and Capital Budget Subcommittee Chair Vanessa Gibson.

They gave their “estimation of the components of the baseline budget that are essential and must be preserved even in the face of impending budget cuts,” and while recognizing the need to cut the budget, said “as we make the tough decisions about where to find savings and efficiencies, it is imperative that the basic social safety net programs remain untouched, and in some cases expanded with additional investments.”

Budget watchdogs have several prescriptions to rein in costs, though some may be hard pills to swallow for the mayor. While it will not help in the current crisis, they have renewed a push for creating a dedicated rainy day fund, which requires state legislative approval. And they all agree though that short-term borrowing should not be the mayor’s first instinct.

“Borrowing funds is the last resort,” said Andrew Rein, president of Citizens Budget Commission, a nonprofit watchdog organization. “The first step is to look at savings and make significant changes. That certainly hasn't been the pattern in this administration but we need bold action now.”

Rein said the mayor should deliver, at minimum, a $3 billion savings plan for the next fiscal year focused on agency efficiencies, with savings that will recur year after year. “This is not a one year problem,” he said.

The outyears will also be impossible to predict, since there’s no telling when people will be able to go back to work and when major industries that the city relies on like tourism, food service, and hospitality will recover. “We haven't experienced a shock of this kind before so it’s not readily clear what the response from tourists, from New Yorkers, from businesses will be in terms of how quickly people get back to normal,’ said Ana Champeny, Citizens Budget Commission’s director of city studies.

Nicole Gelinas, senior fellow at the Manhattan Institute, said the “easiest thing” would be to institute a public sector wage freeze, which could save the city a significant chunk of money but is an unpopular decision that the mayor is unlikely to embrace.

Part of the problem with planning the budget, Gelinas noted, is not knowing the level of aid to expect from the federal government. “Unless we get tens of billions of dollars of federal aid in the Northeast or Mid-Atlantic, we're going to not have a very good recovery,” she said, “and then you don't want what should be a temporary crisis to become a permanent crisis."

Gelinas said the city should focus on maintaining core services – such as fire, police, EMS, corrections, and sanitation – instead of cutting them, which is what she criticized in the mayor’s $1.3 billion PEG.

“I think it's disturbing how quickly they went to make cuts to frontline services,” she said, noting the cuts to bike lane construction and organics collection programs. “If that's the first thing you're going to cut that saves you like a tiny, tiny fraction of a percentage of the budget, it doesn't seem like you’re starting out in the right frame of mind.”

Note - this article has been updated with the mayor's comments from a CNN New Day interview.