From the morning that the planes struck the World Trade Center on Sept. 11, 2001, Gotham Gazette has been covering the efforts of New Yorkers to cope with the unthinkable, to rebuild their city and to adjust to a new, often frightening time. For three years, Gotham Gazette provided intensive coverage of the efforts to recover and then rebound in Rebuilding NYC, and though less intensive, our reporting on the myriad of issues raised by the attacks has continued.

Below we offer some selections from our 10 years of coverage â€“ from Sept, 11, 2001 through today. We apologize for any formatting glitches in the older stories. 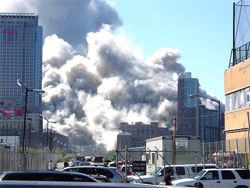 Twin Towers Account: An account from lower Manhattan of the first few awful hours after the attack. (Sept. 11, 2001)

Immigrants Under Attack: Sept. 11 have had a sharp impact on many Americans. But for immigrants and members of some minority groups, including Arab Americans and Muslims, the effects have been particularly dire. (Oct. 1, 2001).

Everybody Loves New York -- For Now: Almost as soon as the hijacked airliners hit the Twin Towers, Americans began reaching out to New York, feeling shock and horror, expressing support, trying somehow to help. The city that much of America once loved to hate was now the subject of sympathy, admiration and even affection. (Oct. 15, 2001)

Not Always as Sweet: Debbie Almontaser, an activist and educator, writes of life as a Muslim in New York before and after 9/11. (Fall 2001)

Living Near Ground Zero: Many of the people who live in Tribeca, the financial district and tucked into lofts hidden above store fronts around City Hall soon returned to their homes. Three months after they fled from the unimaginable, they have returned to live with the inescapable. (December 2001) 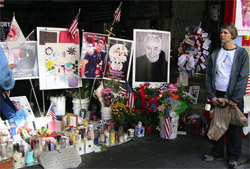 The Fire Department: The terrorist attacks had perhaps their most devastating impact on the fire department. The police department lost 23 and the Port Authority lost 37 uniformed officers. But 343 firefighters died. (Dec. 3, 2001)

Rebuilding by Consensus: Nine months after the attacks, New Yorkers imagined what they wanted to see in lower Manhattan. (June 10, 2002) 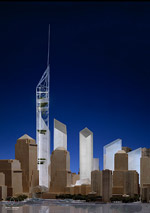 A Conversation with Daniel Libeskind: The architect, whose design was then a finalist for the trade center site, discuses his plan and the ideas behind it. (Feb. 20, 2003)

A Year with Libeskind: The winning design for the trade center site evolves. (March 1, 2004)

Mapping Ground Zero: Dozens of ways of looking at lower Manhattan, past, present and future.

9/11 and Inappropriate Art: Harsh words and controversies flare over what can be displayed near Ground Zero. (Sept. 9, 2005) 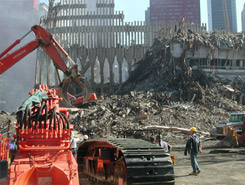 The Heroes of 9/11 Are Getting Sick: Working at Ground Zero seems to have been even more dangerous than initially suspected, say health researchers as rescue workers die from illnesses that seem to be related to working on "the pile." But James Zadroga's death in particular has redirected attention to a problem that, experts say, will likely continue for decades. (Jan. 30, 2006)

The Price of Increased Surveillance: Eighty-two police cameras didn't thwart the 2010 Times Square bomb attempt. But in response, the mayor called for more cameras. Will technology keep us safe? Take away rights? Or both?

9/11 Memorial Nears Completion: On the 10-year anniversary of the Sept. 11, 2001 attacks, the National September 11th Memorial will open to the public, marking the end of a complex, drawn-out and sometimes chaotic process. (July 14, 2011)

Letting History Speak for Itself: An interview with memorial designer Michael Arad. (July 15, 2011)

Improving the Zadroga Act: Those who rushed to the World Trade Center site right after the 9/11 attacks hope a new report will boost their demands to aid fellow responders who now suffer from cancer. (Sept. 6, 2011)

Progress on Fulton Street: After delays and cost overruns that threatened to all but destroy the project, parts of the Lower Manhattan transit hub have started to open. (Sept. 7, 2011)

Tallying the Losses: Some sense of the almost incalculable impact of 9/11 can be gained from then numbers. Andrew Beveridge offers a statistical portrait of our losses â€“ personal and economic. (Sept. 8, 2011)