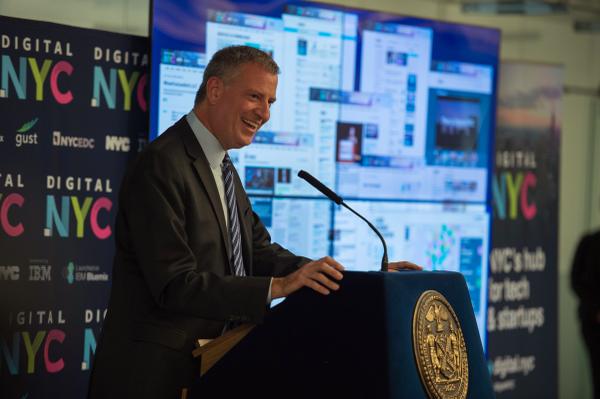 When a flip-phone wielding candidate came out of nowhere to become the next mayor of New York City, the city's tech community grew a little uneasy.

Whether the driving force for tech industry growth in New York City was policies of the Bloomberg administration or the simple fact that technology was booming is an argument for another day. Either way, seeing her as the closest extension of Bloomberg, much of the technology community had endorsed third-place finisher Christine Quinn in the Democratic primary, and post-election was unsure how Mayor-elect Bill de Blasio would handle its needs at a critical time of growth.

As we close the books on 2014, it appears most of the worry was for naught. The tech industry is still thriving and in fact expanding outside of Manhattan. Venture capitalists have not fled. In addition, de Blasio notched two fairly large tech wins under his belt with the highly successful sale of .nyc domain names and the approval of the contract that will turn the city's outdated payphones into modern Wi-Fi hotspots (LinkNYC). The City also launched digital.nyc, "the official online hub of the New York City startup and technology ecosystem," in partnership with a variety of tech entities and largely sponsored by IBM.

"I think they have done well in laying the groundwork to do more in this administration than the previous administration was able to do in 12 years," Andrew Rasiej, chairman of New York Tech Meetup, said in a recent phone interview.

Gotham Gazette takes a look at what Mr. Rasiej and other tech sector leaders have seen in 2014 - and what to look for 2015:

The Face of Tech
Ever the salesman, former Mayor Michael Bloomberg loved being the face of the emerging tech industry. He would go to tech events, give speeches, and constantly talk up New York City as the place to be for tech.

It's debatable whether Mayor de Blasio still needs to do this seeing as how the industry is now on solid footing and growing rapidly. But considering the city's economy is now in part dependent upon the tech sector, de Blasio will have to ensure New York City doesn't lose it's place to emerging markets like Austin that can boast blazing fast internet speeds, low taxes, and cheap rent.

"He has not done as much promotion as we would have liked," Erik Grimmelmann, president and CEO of the New York Technology Council, said in a recent phone interview about Mayor de Blasio. "He is not out there in the media as often as we would like highlighting tech in New York."

Grimmelmann noted de Blasio obviously had larger priorities in his first year with funding and rolling out universal pre-kindergarten at the top of that list. He said he would like to see de Blasio at more tech events in 2015 and promoting the sector more, but added stylistically it does not appear de Blasio will be the type of tech cheerleader Bloomberg had been.

That job may fall to his tech team.

De Blasio's Tech Team
It took months, but de Blasio filled out the leadership of his tech team by the fall. He named Anne Roest as the Commissioner for the Department of Information Technology and Telecommunications (DoITT) in May, followed by the appointment of Minerva Tantoco as the city's first Chief Technology Officer in September, and Dr. Amen Ra Mashariki as the city's Chief Analytics Officer in October.

"He has put in place good people in the important positions and he has created new positions as it relates to tech," Grimmelmann said. "I think it is a very good team, but the teams have been put in place to do longer-term things. It will take time before we know how well it turns out."

The team has been busy with Roest focusing on fixing the new emergency 911 system during her first few months in office. Then it was all hands on deck for the LinkNYC announcement and push to get the contract approved.

Few specifics have emerged from the tech team as to what the administration will be rolling out next year, but it appears much, if not all, will come back to de Blasio's broader goal of bridging the digital divide.

"The first step is to make sure you support and advance the mayor's overall strategy for the city and then the trick is to connect the dots and define a set of principles that can guide those technology decisions that support that strategy," Minerva Tantoco, the city's Chief Technology Officer, said in a recent interview.

Civic Tech
One of the areas de Blasio has room to make his mark is the civic tech space. Bloomberg created the BigApps competition which encourages civic hackers and tech entrepreneurs to use city data to make apps. Despite one of the most robust non-governmental civic tech communities in the country, BigApps is about as far as the data-friendly former mayor got with the civic tech community.

Mayors from cities across the country like Boston, Chicago, Philadelphia, and San Francisco are beginning to team up with their respective civic tech communities to help solve problems. While de Blasio hasn't quite opened up City Hall for a hackathon yet, he has paired up with civic hackers to put the City Record archives online after signing a bill into law that requires it. The project could be a hint of more to come.

Tantoco said she is "still in the listening phase" with the civic tech community but noted she is eager to work together.

"I welcome ideas to collaborate with others and I have a strong commitment to make that a huge part of what we do in New York City," Tantoco said.

Collaboration may end up being easier after the first of the year. Rasiej and his business partner Micah Sifry will open Civic Hall, an 18,500 square foot space in the Flatiron District. Civic Hall will offer a collaborative workspace for those in the tech industry and could be the bridge between government and tech the city has been missing.

Contract Procurement
In the coming years the City will need to purchase new equipment and software to update its aging technology. The City has not had the best track record in recent years with technology contract procurement, with the CityTime scandal being the highest profile of a string of projects that went over budget and/or over time.

New York City has not been the only one grappling with tech contract procurement, the slow pace of which typically doesn't keep up with the pace of technology. The biggest question is how cities can balance protecting their financial interests with ensuring the best product is purchased and delivered.

"It is a hairy, knotty problem," Tantoco said. "As new technology comes online, the way you buy them and select them becomes way more important," she added. "As technology becomes a huge part of our daily lives and how citizens interact with their government, these technology decisions and purchases become even more important."

The Department of Investigation recently released recommendations for large tech procurement contracts following the bungling of updating the 911 system. Those recommendations were discussed at a recent City Council hearing and will form a guide as the administration moves forward with contract procurement. City Comptroller Scott Stringer had announced a new directive in April outlining heightened requirements for oversight of city IT contracts.

Open Data
The city's Open Data Portal has been up and running for several years now, but there is still vast room for improvement. Data quality and simply getting more data on the portal have (and will likely always be) huge asks from the tech community.

"I would like to see him open up that considerably and do much more in that space," Grimmelmann said. "It is a great way of leveraging the talents of the community to provide data and for the community to figure out what it means."

Grimmelmann noted the biggest impediment to opening up data is for bureaucratic reasons: politicians don't want to release data that will end up burning them in the papers. It's a slippery slope for politicians, but one Grimmelmann wants to see de Blasio overcome.

"I would like to see him extend his leadership in overcoming those fears and reactions and make more data available," Grimmelmann said.

Tantoco called the Open Data Portal a "key priority" and said in the coming months her team would continue to focus on the ease of use and accessibility of the data.