PHOTOS OF THE WEEK: Mayor de Blasio greets Pope Francis, via @BilldeBlasio; Pope Francis at the 9/11 memorial, via Ben Fractenberg. 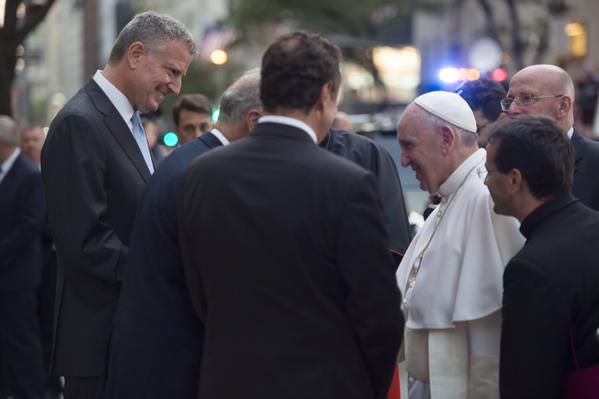 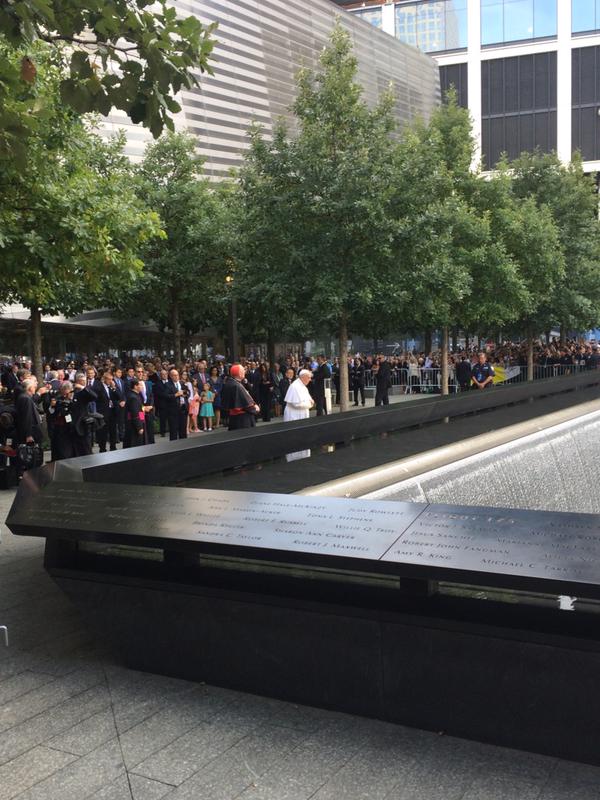 TOP STORIES OF THE WEEK:

1. Pope Francis Visits NYC: Pope Francis was greeted by New York's top elected officials when he arrived at St. Patrick's Cathedral for evening prayers Thursday, his first public appearance in New York after addressing Congress in Washington, D.C. Mayor Bill de Blasio and Governor Andrew Cuomo both greeted Francis and each has expressed admiration for the pope's messages of justice and compassion.

In New York, Francis also addressed the UN General Assembly and spoke at an interfaith ceremony at the 9/11 memorial on Friday morning. Friday afternoon, the pontiff is set to visit a school in East Harlem, proceed through Central Park, and give mass at Madison Square Garden. Mayor de Blasio sees the pope's message as similar to his and cites the pope in support of his mission to combat inequality, calling Francis the "leading moral voice on this earth.”

2. Bratton Responds to Comptroller, City Council: NYPD Commissioner Bill Bratton hit back at Comptroller Scott Stringer this week for comments he made about the city's use of crime statistics. At a press conference on Monday in Brooklyn near the site of several weekend murders, Stringer said the city's crime statistics were "politicized" and called for a "real" discussion on how to curb violence in New York City. Bratton defended the police force and stated once again that overall major crime has decreased. Bratton also stated again this week that he sees the City Council as overreaching in its attempts to legislate NYPD-related policy. This time, Bratton was spurred to speak out against the Council about a new bill to implement warnings when a police officer may be a frequent user of excessive force.

3. Legal Moves in the Bronx: Bronx District Attorney Robert Johnson has secured a nomination for an open state Supreme Court judgeship. Johnson waited until just after he won the primary for his DA position with no one running against him to announce that he wanted to seek a judgeship. Now, Democratic party leaders are handpicking his replacement on the November ballot. Bronx Democratic leaders are being criticized for a variety of machinations involved that make it appear they are subverting the democratic process and largely leaving voters out of the equation. They have defended themselves, in part, by saying that there is nothing illegal they are doing. Several Bronx leaders have remained silent on the moves.

4. First Homeless Shelter/Affordable Housing Development: The new $62 million "Landing Road Residence" project in the Bronx marks the first time the city has attempted to tackle two major issues - homelessness and affordable housing - under one roof. The project will feature 135 units of housing alongside a 200-bed shelter for homeless working adults.

Newest Prison Sentences Remind Of Limited Movement On Even Agreed Upon Reforms, by David King

Inmate Bill Of Rights Among New Wave Of Rikers Reforms, by Meg O’Connor