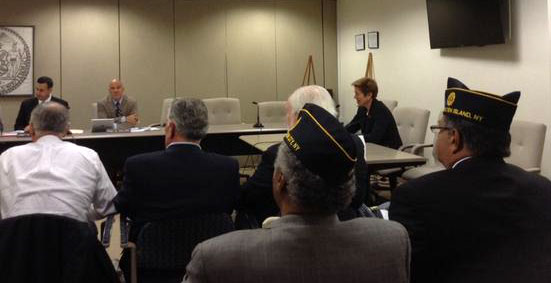 NEW YORK—The Veteran Advisory Board (VAB) has been a staple in the New York City veterans community since 1987. But it has not always been a smooth ride, with legislation needed in both 2002 and 2006 to improve the board.

On Monday, the VAB was back in front of the City Council with council members looking for ways to improve the usefulness of the board and some advocates questioning the board's transparency.

"While we recognize and appreciate the work our board members do - most importantly, on a volunteer basis - some veterans are of the belief the board could do better," Council Member Eric Ulrich, chair of the council veterans committee said on Monday. "A lot of folks in the veterans community, those at home and those returning from abroad in the coming years, all need the support the city can give them."

The VAB, which was expanded from five to nine members in 2002, is charged with advising the Mayor's Office of Veteran's Affairs (MOVA) on all issues related to veterans. In 2006, the Council passed Local Law 10 which required the VAB to meet quarterly and issue a report to the Council annually.

Those reports have been submitted to the Council, but finding them has proven an arduous task—until recently. In the spring, after outcry from veterans advocates, the reports were finally published online on the MOVA website along with the names of the board members, who appointed them (Council Speaker or Mayor) and when, and when their term expires.

But the required quarterly meetings still remain a mystery. According to testimony from Vincent McGowan, chairman of the VAB, a meeting was held on September 16th. There was no announcement the meeting would be taking place on the MOVA website or through its social media accounts, something that drives at the heart of the issue many advocates take with the VAB.

"There has been no real measure of accountability in how and when the board meets with the community in their respective boroughs, who they report to with issues, how those issues make it up the city's chain of command, or even how the public can give input into the board," said Joesph Bello, a Gulf War veteran and advocate who runs NY Metro Vets.

VAB Chair McGowan testified that at the September 16th hearing the board unanimously voted to keep the current chair (himself) and vice chair for one term (three years). The fact that a decision of this magnitude was made without public outreach about the meeting was not lost on Bello. He suggested to Council Member Ulrich that the appointment process become more transparent.

Bello, along with the Iraq and Afghanistan Veterans of America (IAVA) suggested publishing when the meetings were going to take place online, as well as the minutes from the meetings.

Ulrich noted VAB members don't have access to update the MOVA website and that cooperation from other City-run agencies would likely be needed to accomplish this.

In addition to the transparency issues, some advocates believe the board could be doing more to reach out to the veteran community, particularly the younger veterans of the latest wars in Iraq and Afghanistan. These veterans are often digital natives and find the antiquated system ineffective in providing them with what they need to access services.

"Unfortunately, many veterans in New York City are not aware of the VAB and the role it plays within city government," said Jason Hansman, senior program manager for IAVA. "For our members who are aware of the group, many believe that historically it has not been taken seriously and that it has not had the impact on the lives of veterans and their families that it should."

Hansman suggested there be better representation of student veterans on the VAB. The board currently does not have any students. The make-up of the board is hard to discern because according to the MOVA website six of the nine members' terms have expired.

Gotham Gazette reached out to MOVA to clarify. Questions were referred to City Hall, but were not immediately returned by press time.