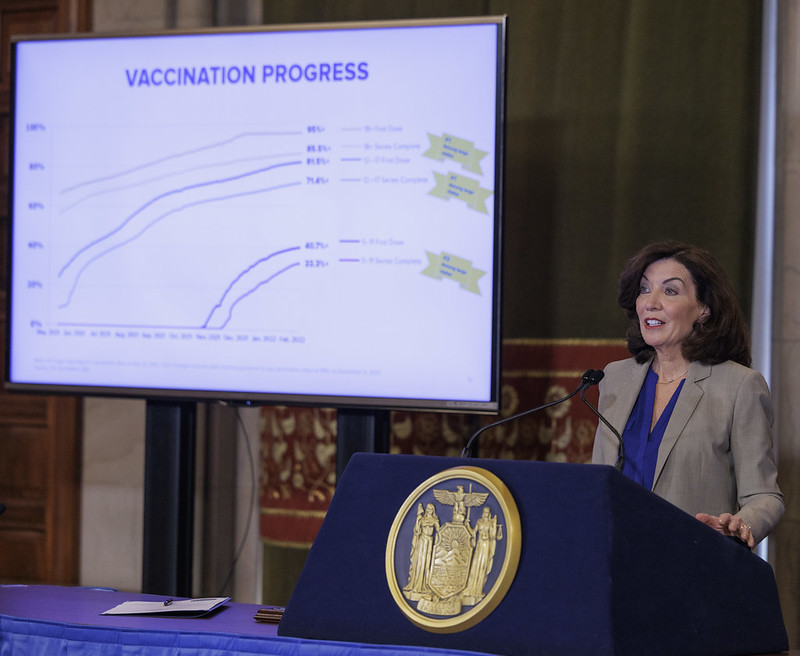 Governor Kathy Hochul has yet to hire independent consultants, or even solicit contract bids, for a COVID-19 after-action review the administration said in April was already "underway.”

After having said in March that she told her team to do a full investigation of the state’s pandemic response, in May Hochul said the state would be working with independent consultants to conduct the investigation. Mark Johnson, a spokesperson for State Comptroller Tom DiNapoli, said no contracts or requests for proposals (RFP) – the first step in the public bidding process – had come to the comptroller’s office. "We are not aware of any contracts or RFP’s related to this," he wrote in a June 28 email to Gotham Gazette.

A spokesperson for Hochul confirmed no RFPs had been issued for the review, which according to the governor's public comments would examine "every aspect" of the state's response to the pandemic.

"We will be conferring with experts across various sectors to finalize the scope of the Request for Proposal for the pandemic response review, which will be publicly posted later this summer," wrote Hochul spokesperson Bryan Lesswing in response to a Gotham Gazette inquiry. He did not respond to follow-up questions about the estimated date for releasing the RFP.

"Governor Hochul is committed to doing everything in our power to keep New Yorkers safe," Lesswing wrote. "In March, Governor Hochul directed her team to boost New York State’s COVID-19 response preparedness for a potential uptick in the fall and to explore a pandemic response review to better inform the State’s response to future pandemics and related emergencies. ​Her team immediately began working with State agencies to learn lessons from the Omicron surge and determine the objectives for a meaningful and substantive review."

The latest comments further muddle previous statements made by Hochul or her representatives to Gotham Gazette and in public appearances, which indicated the review had begun with outside consultants.

On March 18, in response to inquiries for a story on whether New York should initiate a pandemic after-action process, a spokesperson for Hochul said the governor "is exploring all options to review our pandemic response and protect New Yorkers from future public health crises." On April 22, after the New York Times reported Hochul had in late March ordered her team to investigate “the good, the bad and the ugly” of the state's response to COVID-19, a different spokesperson for the governor told Gotham Gazette the review was "ongoing." When asked to clarify whether the probe had begun or if the administration was still looking into the possibility of initiating it, the spokesperson, Hazel Crampton-Hays replied: "underway."

A month later, on May 23, Hochul told reporters at an unrelated press conference that she had a different vision for the pandemic review. “Actually, we have outside consultants who are going to be working with us to examine every aspect of the pandemic,” she said at the time. “The good, the bad, the ugly. Because I have to be able to leave future governors what was learned. Not just in the healthcare space in response to nursing homes, but also decisions that affected our economy.”

It was the first time she indicated the process would involve outside investigators, but seven weeks later, no formal steps have been taken to hire such a consultant.

On the debate stage with other Democratic candidates for governor on June 7, Hochul asked for more time to put together an independent commission after being pressed by moderators about whether the families of nursing home victims of COVID-19 deserved compensation.

"Give us time to put together a blue ribbon commission of people who are independent, not the consultants who were advising the last administration," she said. "I want to make sure we find out exactly what happened in the nursing home. I gave them an apology and I said I will look at this even further to determine what else we can do to help them."

In response to requests to clarify the apparently conflicting remarks, an administration spokesperson said the previous statements had referred to the governor's initiation of planning for the review with top officials. Asked why it has taken at least three months from the time Hochul first reportedly mentioned it to top officials, the spokesperson insisted there was no delay in initiating the formal review process and that it has taken time to determine the parameters of the probe.

The administration has never shared details about the potential after-action examination’s areas of focus, methodology, or timeline, which are still being determined.

Public health experts and transparency advocates have been calling on the state to initiate a public investigation that would examine and report findings on the details of the state's handling of the pandemic, including many of the opaque decisions made by Governor Andrew Cuomo and other state officials behind closed doors and with limited public oversight. That could include anything from the March 2020 emergency order to shut down much of public life to policies around nursing home residents to the rollout of vaccines – many aspects of which have been strongly criticized.