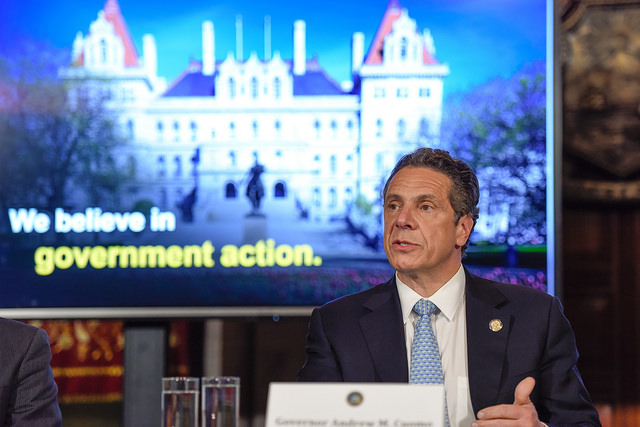 AGov. Andrew Cuomo welcomed reporters into the Capitol's Red Room for the first time in nearly a year to announce a budget deal at 8:30 p.m. Thursday night. The announcement came as both houses of the Legislature took a break from voting on budget bills that had already been introduced, yet neither legislative majority leader joined Cuomo for the press conference.

Legislators from the minorities of the two houses lamented having little time to review the bills and the fact that most of them were short any real policy decisions and featured sections marked "intentionally omitted."

After weeks of haggling, bursts of information, and rumors, Cuomo announced some hard numbers contained in the budget, just a few hours before the start of the new fiscal year. The governor happily announced that New York would see a phase-in of a $15 minimum wage and a paid family leave program. He appeared less thrilled when admitting his proposed Medicaid cost-shift to New York City was not part of the budget (this after his CUNY cost-shift had been taken off the table a few days ago).

"I am very excited about this budget," Cuomo said. "We call it a budget – really it is an overall operating plan for the state of New York and I believe that this is the best plan that the state has produced, if its passed, in decades, literally."

The state budget agreement by the numbers:

8:30 p.m: scheduled time of Gov. Andrew Cuomo's announcement of a budget deal; 3.5 hours before the start of the new fiscal year.

0: times Republican Senate Majority Leader John Flanagan mentioned a minimum wage increase or paid family leave in a seven-paragraph statement put out by is office to celebrate the budget agreement.

3: budget bills introduced to both houses to be voted on before a deal was actually announced.

6: budget bills left to vote on after a budget deal was announced.

12/31/2018: date New York City will see its minimum wage hit $15 per hour for businesses with more than ten employees.

12/31/2019: date New York City will see its minimum wage hit $15 per hour for businesses with ten or fewer employees.

$12.50: hourly minimum wage localities north of Westchester will reach on 12/31/2020, at which time the state budget director and department of labor will set a path to $15 per hour.

6: years Cuomo claims to have kept budget growth under 2 percent. (Some budget watchdogs claim Cuomo uses tricks and gimmicks to appear to meet the cap.)

2: years in a row the state budget has been voted through after the March 31 midnight deadline and thus technically "late."

$240: increase in per pupil aid for charter schools.

12 weeks: length of new New York paid family leave benefit, for paid time off to care for a new child or ailing relative.

6: months workers will have to have worked at a job before being eligible for New York's paid family leave.

$1.5 billion: marked for phase II of the Second Avenue Subway.

63: copies of a report detailing changes made to the executive budget that Senate Republicans had to have printed off for Senators after Sen. Liz Krueger pointed out the report was required by law.

Not in the Budget
$485 million previously proposed cost shift to New York City for CUNY funding.

A plan to replace the 421-a property tax credit used by New York City to entice developers to include affordable housing in their developments.

$240 million initially sought by the Cuomo administration to give CUNY staff retroactive raises.

0 criminal justice proposals from the executive budget included in the final budget.

[Related: Everyone Agrees Albany Needs Ethics Reform, Except the People Who Matter Most]

[Related: For State Budget, Leaders Choose 'On Time' Over Open]