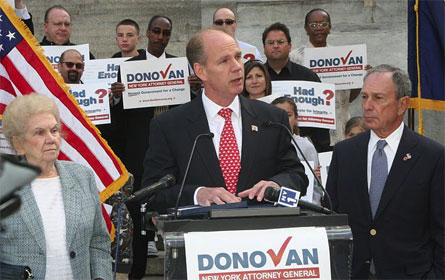 Photo courtesy Daniel Donovan
Mayor Michael Bloomberg appeared at Dan Donovan's side when he announced his candidacy for attorney general but that has not assured Donovan's success.

When the general election campaign for state attorney general began, Republican candidate Dan Donovan seemed in a strong position. He had a record as a prosecutor, a moderate image and the support of Mayor Michael Bloomberg and people in the financial industry with lots of money to give. His opponent, State Sen. Eric Schneiderman entered the race as a career politician with an ultra liberal record and rhetoric to match.

Now, though, Donovan's campaign seems to be foundering. The Staten Island district attorney trails in the polls and lags far behind Schneiderman in fundraising. He has little staff and a campaign operation that appears disorganized. Donovan pulled all his television ads for this week and still has not aired an ad in Manhattan.

The Donovan campaign and state Republican officials still say Donovan will prevail on Election Day and point out that any Republican running in heavily Democratic New York will encounter obstacles. Polls have shown Schneiderman's lead shrinking and that a substantial number of voters remain undecided in the race.

"I would say it's a real David vs. Goliath story," said a source close to Donovan's campaign. "They have all the unions and special interests," said the source, referring to Schneiderman. "We have a lot of grit and heart (and coffee); in reality, it's probably the best reflection of the candidates themselves."

Schneiderman’s campaign has around 12 full-time staffers not counting consultants. That is twice as many as Donovan’s. Donovan's press person, Virginia Lam, openly admits that Schneiderman's camp has more "trackers than we do staffers." (Trackers keep tabs on the public appearances of the opposing candidate and look to capture gaffes on camera.) Donovan has only six full-time staffers, aided by consultants and volunteers. Schneiderman has four press staffers -- with upstate and downstate spokespeople. Donovan only has one spokesperson.

Schneiderman's staff isn't the only thing that is larger-- so is his personality. He is known as a hyperactive overachiever and thought of as an outspoken, master debater.

Donovan is soft spoken and direct. Some say shy. Donovan staffers describe their boss as a "salt of the earth" kind of guy.

Sources close to Donovan’s campaign say that his work style is very much reflected in his staff. "They are of the 'work hard, keep your head down' mentality," said one source. "No glory, just get the job done right. It very much mirrors Dan's own approach to the job."

As the race for what some consider the most powerful elected position in New York State hits the back stretch, some wonder if what was once thought to be a very winnable race for Republicans is getting further out of reach. It may be a "David vs. Goliath" story, but in politics admitting you're outnumbered and outgunned usually spells doom, not triumph.

Republican Chairman Ed Cox puts the David vs. Goliath theme in a different perspective. "It is David vs. Goliath because this is New York; the state is hugely Democratic. Dan is running against the odds, as are most Republican candidates, so Schneiderman is going to be Goliath and Donovan is going to be David. He will be the one holding a slingshot."

Donovan may be having trouble drawing enthusiasm because the man at the top of the ticket -- Carl Paladino -- is neither moderate nor doing very well in the polls. Donovan has tried to avoid speaking about Paladino.

This is one of a number of stories Gotham Gazette will be running between now and Nov. 2 on key races this year. Our coverage so far:

Battleground District: GOP Sen. Frank Padavan eked out a narrow win in 2008, fueling Democratic hopes of ousting the veteran lawmaker this year. Control of the State Senate could hinge on the outcome.

Beyond Hevesi's Shadow: Now that the former comptroller has pleaded guilty, the race for the post can center on the differences between the incumbent, Thomas DiNapoli, and his GOP challenger, Harry Wilson.

Donovan was supposed to be well funded; he has the backing of Bloomberg, who is known for supporting Republican candidates with his financial power. Bloomberg has given Donovan's campaign over $30,000, and Donovan has hired Bradley Tusk, who worked on Bloomberg's 2009 re-election campaign.

But as the Observer reported Bloomberg's support has not sparked a bonanza of other donations for Donovan. The campaign reported having only $400,000 on hand at the end of September -- half of what Schneiderman had -- and after Schneiderman finished the grueling and costly Democratic Primary. Bloomberg will host another fundraiser for Donovan next week.

With just under two weeks left until Election Day Donovan’s, campaign decided to go without any television spots this week. At the same time, a Siena Pollof "likely voters" found Schneiderman leading Donovan 44-37.

Schneiderman's campaign pounced on the news. "On the same day it was revealed Dan Donovan was forced to pull his ads from TV for the entire week, the first Siena poll of likely voters in the race for attorney general shows Donovan needs to make up 7 points, with just 13 days to go," read the release issued by Schneiderman’s campaign.

A source close to the Donovan campaign countered that taking the ads off the air for the week was part of their strategy.

The campaign bought ads everywhere but Manhattan after the Sept. 15 primary, then planned to stay off television before returning to televison across the state, including Manhattan for the last 10 days, according to the source, who added that Schneiderman also had a reduced television buy the previous week.

"They have their strategy, we have ours. We need the push at the end, because turnout is what will determine this race," the aide explained.

Democrats say Donovan has been spending his campaign money on fund raising consultants that have not done him much good.

The Donovan campaign, though, portrays Schneiderman’s operation as the one in trouble because, according to a recent release, "independent and undecided voters are trending overwhelmingly for Dan Donovan."

"Team Schneiderman is clearly in chaos and disarray with the knowledge that even with a 5-1 voter registration advantage, a financial advantage ... and their disgusting attempts to scare women and minority communities with weak and baseless attacks -- they still can’t stop the tidal wave of momentum for District Attorney Donovan," the release continued. 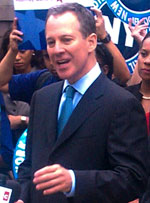 Running from the Middle

Schneiderman was supposed to be too liberal to beat the middle-of the-road Donovan -- even his opponents in the Democratic primary said that.

"Anyone would look moderate standing next to Eric," said Sen. Steve Saland of Poughkeepsie as he waited for Donovan to show up at the Pougkeepsie Republican Victory Headquarters on Tuesday. "The view from Manhattan is different from just about anywhere else in the world, except maybe San Francisco," he continued, noting that he thinks Schneiderman appeals to minorities in the city and extreme Manhattan liberals.

Donovan paints Schneiderman as a part of Albany’s corruption problem. His campaign attacks Schneiderman for being elevated in life by his rich father and for being beholden to the unions that have backed him and donated to him.

"Certainly the public service unions haven't endorsed me. They don't want to see me as the next attorney general. They’ve had a good grip on Albany for the last decade -- and my opponent has been part of it-- they want to have a good grip on the next AG," Donovan said.

Last week, Schneiderman appeared in Albany to receive the endorsements from union officials. Dennis Hughes, president of the AFl-CIO; Tom Comanzo vice president of PEF and Larry Bulman of the Pipe Trades Association all personally endorsed Schneiderman. Schneiderman was asked about his close ties to unions and how that might affect his relationship with Andrew Cuomo, who has said that, if he become governor he intends to make the kinds of cuts that unions will not like.

"This is a tough time for everybody," Schneiderman told reporters, adding that union members don't want "pie in the sky. They’re just looking for practical solutions."

Cox characterizes Schneiderman as a career politician whose political future figures into all of his calculations. "Dan would never do something like Eric did with Al Sharpton and say that he will have an annex for Sharpton’s idea of justice. He would not make that kind of political move," Cox said, referring to Schneiderman's comments when Sharpton endorsed him.

The New York Times recently reportedthat one in four dollars of the money Donovan has raised can be traced back to $17 billion hedge fund Elliot Management that is overseen by Paul Singer a staunch defender of Wall Street.

Schneiderman has also taken Wall Street money, but it does not dominate his contributions.

Both men say they will make fighting corruption in Albany a priority. Schneiderman touts the fact that he led a committee that recommended the ouster of disgraced Sen. Hiram Monserrate. The Donovan campaign says Schneiderman only did it after Monserrate had been convicted on a misdemeanor charge. They say Schneiderman worked hand in hand with Sen. Pedro Espada as well as Monserrate until it was politically expedient not to.

To fight corruption, Donovan said, "We need someone who has worked 15 years as a prosecutor, who has no ties to Albany, hasn't served their last 12 years there like my opponent and may have to investigate the people he has served with and has relationships with."

Donovan said he wants the attorney general's office to oversee all corruption cases in Albany, and would increase transparency and monitoring of member items.

"Partisanship has no place in the office of the chief warrior for the people of the State of New York," said Donovan.

Schneiderman has said he will make fighting corruption a top priority for his office and backs the creation of a public financing system for state races.

The candidates have confirmed one remaining debate to take place in Albany on Monday. Donovan’s campaign has complained that Schneiderman has backed out of or refused to take part in other forums and debates. They wonder why Schneiderman, who is known for his skills as a debater, would not want to debate. Pundits note that avoiding debates is the behavior of a candidate who assumes he is the frontrunner. Schneiderman's camp says Donovan has dodged proposed debates on Wall Street

"Mr. Donovan has rejected multiple debates on Wall Street issues," said Schneiderman spokesman James Freedland, "including one scheduled earlier this month in Syracuse, because he knows it must be hard to defend his hands-off approach to policing corporate corruption when New Yorkers are losing their homes and life savings due to white collar crimes."

Cox said that he thinks Schneiderman probably has a lead among voters right now: "They are both in the 40 percent range, but undecided’s are going to go with Dan."

If that does not happen, Donovan may not be all that disappointed. Some Republicans indicate that Donovan already has the job he wants. One Republican in the know said that Donovan needed convincing to run and would take a $40,000 pay cut if he were to become attorney general.

"He already has his ideal prosecutorial job, but going after corruption in Albany means so much to him that he is doing this," the source said.