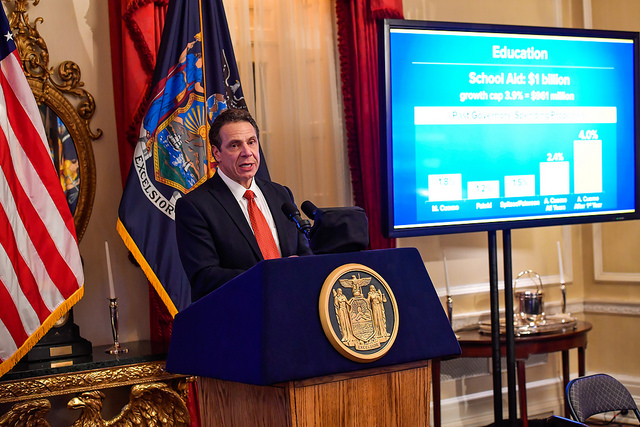 Just before 8 p.m. Tuesday evening, Gov. Andrew Cuomo presented to the public his Executive Budget for fiscal year 2017-2018. Speaking from the Executive Mansion, Cuomo briefed a room full of journalists and his aides in remarks that were live-streamed on the internet and carried by NY1 on television.

As Cuomo explained, the $152.3 billion budget plan followed his State of the State tour, where the governor spent three days giving six speeches across the state. “Our prime focus this year is on addressing the problems of the middle class,” Cuomo said Tuesday evening, picking up where he left off during his State of the State tour, “and all of the problems for the middle class.”

Cuomo led with college affordability, the highlight and lead proposal of his State of the State agenda, and also discussed creating jobs and reducing prescription drug costs as key agenda items for middle class families.

The governor highlighted several other major proposals that he had discussed during his speeches of the prior week: infrastructure and tourism investments, criminal justice reform, expanding ride-hailing outside New York City, government ethics and campaign finance reform, and more.

Importantly, ride-hailing, raising the age of adult criminal responsibility, the Dream Act, ethics and campaign finance reform are all in budget bills, even though they are not all spending proposals. This gives Cuomo additional leverage in negotiating these mostly contentious proposals with the state Legislature.

“I hope for a good legislative session,” Cuomo said toward the end of his initial presentation, before taking questions from the reporters gathered. The governor has been on poor terms with state legislators of late, and his handling of his budget presentation did not appear to help matters. He briefed members of the state Senate on Tuesday afternoon and then scheduling issues created a problem with briefing Assembly members, but Cuomo’s staff briefed Assembly staff, he said.

Soon, weeks of budget hearings will begin, as well as closed door negotiations. A budget for fiscal year 2017-2018 is due by April 1.

As he is wont to do, the governor in his budget presentation extolled that he has some new national firsts in his agenda, like college tuition relief and prescription drug price controls. Cuomo is especially fond of New York being the first state (or first large state) to pass certain policies, like marriage equality or a $15 minimum wage program.

The governor spent a portion of his budget presentation discussing the mechanics of balancing his budget while staying under his self-imposed 2 percent cap on annual state operating spending increases.

“One of the main aspects of this budget is tax policy,” Cuomo said. “We do not cut taxes for millionaires, we do cut taxes for the middle class.” Cuomo is proposing a three-year extension of the state’s “millionaire’s tax,” which, he said, will account for about $4 billion from about 45,000 households. Cuomo explained he is combining that extension with a tax cut for hundreds of thousands of middle class earners that will “cost” the state about $1 billion in revenue.

The $4 billion from the millionaire’s tax -- which is expected to be fought by the Republican-controlled state Senate -- minus the $1 billion for the middle-class tax cut helps create $3 billion Cuomo said is needed to close what was a roughly $3.5 billion budget gap, which existed even with state operational spending growth at just 1.9%.

“The anger is hopelessness,” Cuomo said of middle class people who are frustrated with stagnant wages and increasing expenses, trying to raise a family. Not only is the governor proposing a middle class tax cut and additional public college tuition assistance, but also an expanded child care tax credit.

Cuomo said that his tax and spend plan allows for $1 billion in additional education spending, which is the largest chunk of the state budget. According to the governor's budget book, "Medicaid and School Aid are the State’s largest local aid programs, comprising over 45 percent of the State Operating Funds budget." Cuomo's spending plan includes $25.6 billion in school aid for school year 2018, "an increase of $961 million (3.9 percent)," and $19.5 billion for Medicaid.

The governor’s budget proposal includes $5.6 billion to be spent on debt service, up 4.8% from the current year.

As he usually does, the governor touted the many billions of dollars that are being spent on infrastructure improvements around the state, though much of that spending is not part of the operating budget Cuomo was discussing. He mentioned investment in water infrastructure, explaining that the water quality crisis in Hoosick Falls has been a learning experience for all involved. The governor also explained that the state is continuing to invest heavily in economic development, including in Buffalo, despite the fact that Cuomo’s Buffalo Billion program has seen a major corruption scandal.

Cuomo focused heavily on tourism. “When people see upstate New York, they love it and they come back,” the governor said, explaining his plan for the Empire State Trail, which will connect Buffalo, Albany, New York City, and run north from Albany to the Canadian border. “All we have to do is get them to go the first time, and that’s what ‘I Love New York’ is all about,” the governor explained of the state’s campaign, while also noting that tourism creates much-needed upstate jobs.

As for New York City, Cuomo said “no” four times and nothing else when asked if there were any proposed cost-shifts to New York City like he proposed to the tune of about $800 million last year for CUNY and Medicaid. A full review of budget documents will tell whether the governor has taken any new steps in his ongoing feud with Mayor Bill de Blasio. On Tuesday afternoon de Blasio expressed frustration with not having been briefed by Cuomo about the imminent budget proposal. Cuomo again has a three-year extension of mayoral control of New York City schools in his budget. De Blasio has gotten two one-year extensions in a room.

One area of focus for Cuomo that aligns with de Blasio’s interests is affordable housing. Cuomo explained that his replacement for the expired 421-a program was included in his budget and that with the deal agree to by the building trades union and the real estate lobby, he expected the state Senate to agree to release nearly $2 billion in affordable housing funds allocated last year.

While the incoming Trump administration loomed over the state budget presentation, Cuomo did not indicate he had made any adjustments in anticipation of certain moves by the new federal regime. Cuomo and Trump are set to meet Wednesday in New York City.

[Read: A Cheat Sheet to Governor Cuomo's 2017 State of the State Proposals]