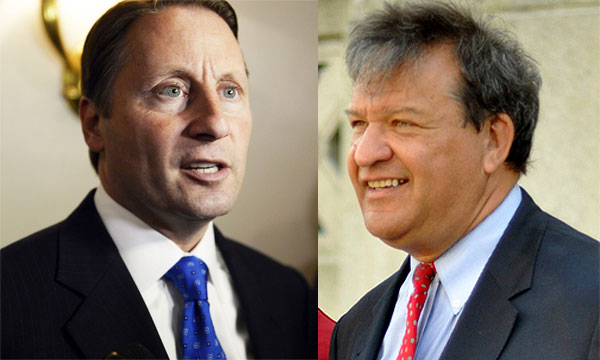 Welcome to Election Day 2017. In New York City, Mayor Bill de Blasio is expected to sweep comfortably to reelection over six other candidates, including Republican challenger Nicole Malliotakis, an Assembly member from Staten Island, despite their efforts to paint him as an ineffective manager beholden to his campaign donors. Similarly, many of the city’s 51 City Council seats that are up for grabs are predetermined by a heavily Democratic electorate, but there are a few spirited city races heading into Election Day, Tuesday November 7.

There are also a handful of especially interesting races to watch outside of New York City, as voters will choose two significant suburban county executives and others in hotly contested elections.

A Few to Watch in New York City
In the city, it’s the battle of the aides in the 43rd Council District, centered in Bay Ridge, Brooklyn, one of the city’s last bastions of Republican strength, where punk rocker-turned-government aide Justin Brannan, a Democrat who has worked for outgoing Council Member Vincent Gentile and for Mayor Bill de Blasio, faces John Quaglione, a top staffer to Republican State Senator Marty Golden. While Democrats outnumber Republicans in the district, it is one area that has elected GOP representatives like Golden.

One district over, in Brooklyn’s 44th Council District, Democrat Kalman Yeger, the chosen successor of outgoing Council Member David Greenfield, faces Yoni Hikind, the son of Democratic Assemblymember Dov Hikind, who has created the “Our Community” ballot line, he says, in order to provide voters with “a choice.” Greenfield decided not to run for reelection at a time when his campaign could install Yeger as the Democratic nominee, and Greenfield and the elder Hikind have a long-running rivalry.

In Manhattan, District Attorney Cy Vance, a Democrat, is seeking reelection while facing blowback for campaign contributions linked to cases he declined to prosecute involving disgraced movie producer Harvey Weinstein, members of the Trump family, and Mayor de Blasio. Vance will be the only name on the ballot for Manhattan D.A., but Marc Fliedner, a progressive former Brooklyn prosecutor who ran an unsuccessful primary campaign for Brooklyn DA earlier this year, is waging an assertive write-in campaign, which is attracting some buzz. Fliedner is a long-shot, but he moved to a Manhattan apartment and has a lot of social media attention on his campaign.

There are also interesting city races to watch in Council Districts 1, 35, and 40, where three incumbent Democrats -- Margaret Chin, Laurie Cumbo, and Mathieu Eugene, respectively -- are trying to hold onto their seats against spirited foes.

One Important Reason to Vote Across the State
But even those in the city, or across the entire state, who may find their ballot choices uninspiring should head to the polls Tuesday, at least for the opportunity to flip over the ballot and answer three big “yes” or “no” questions with serious implications. One referendum would determine whether New York will hold a state constitutional convention; the second would allow judges to strip some or all public pensions from officials who are convicted of corruption; and the third would allow limited flexibility in preserved land to permit localities to make certain infrastructure improvements.

Outside New York City
Incumbent Democratic mayors of the state’s three largest cities outside New York City -- Lovely Warren in Rochester, Kathy Sheehan in Albany, and Byron Brown in Buffalo -- successfully beat out formidable challengers in their primaries and are expected to win reelection easily in the general.

There are several exciting races worth paying attention to in the state’s swing areas, the outcomes of which are bound to have a significant impact on politics and government at various levels. Not all are a traditional toss-ups between Democrats and Republicans, though they are on Long Island and in Westchester. In Syracuse, however, a fight within the Democratic Party has unfolded, as two candidates, one a Democrat and the other Independent, are going head-to-head for the mayoral seat. In Erie County, where many are following a hotly contested race for county clerk, party affiliation gets a bit messier.

Westchester County Executive
Despite its 2-to-1 Democratic leaning electorate, Westchester County has twice elected Republican Rob Astorino as its top executive over formidable opponents. Astorino, seeking another term, lost the 2014 gubernatorial race to Governor Andrew Cuomo, who has endorsed State Senator George Latimer in his quest to unseat Astorino. Astorino’s popularity appears to be owed in large part to his fiscal policies, including keeping a campaign promise not to raise property taxes, but that may wane due to his vocal support for President Donald Trump and the political moment occurring one year after Trump’s surprise win.

The Latimer-Astorino race has featured a lot of mud-slinging, including accusations of bribery, corruption, tax evasion, and the nefarious influence of outside money. While Astorino’s campaign has cast Latimer as a delinquent state legislator and tax deadbeat, Latimer and his supporters are pointing to the infusion of $1 million in support of Astorino from controversial billionaires Robert and Rebekah Mercer.

The race is seen as a toss-up by many.

As always, Westchester’s notoriously high property taxes are central to the policy debate, with both candidates vowing to keep rates stagnant, but this year, at times overshadowing the discussion is whether Westchester’s socially liberal electorate -- which overwhelmingly voted for Hillary Clinton in the 2016 presidential election -- will stick with an enthusiastic Trump supporter in Astorino, who has sought to keep much of the campaign’s focus on his local record and on attacking Latimer.

This race will have significant implications for New York State’s political landscape regardless of the outcome. A Latimer win, while it would be a victory for Westchester Democrats, would also deal a blow to state Senate Democrats who hope to retake that house, and therefore the entirety of state government, in 2018. Latimer’s open seat would trigger a special election that could see a member of the Independent Democratic Conference or a Republican take the seat.

For Astorino, who is mulling another run for governor next year, the stakes are exceptionally high. While the GOP county executive has had a lengthy run, if he loses, or even wins by a small margin, he may be forced to reconsider any gubernatorial ambitions.

Nassau County Executive
With current Nassau County Executive Edward Mangano facing federal corruption charges and not seeking reelection, both Democrat Laura Curran and Republican Jack Martins have made reform a central part of their platforms. Each candidate has spent over $1 million on attack ads, accusing each other of corruption in the final days before the general election.

Martins, a former three-term state senator, has criticized Curran for hiring BerlinRosen, a consulting firm with ties to Mayor Bill de Blasio, and said that Curran wants to allow New York City progressives to take over the Long Island county. Meanwhile, Curran, a county legislator, has tried to associate Martins with former Senator Majority Leader Skelos, who was convicted on corruption charges that were then overturned but will be retried in 2018, and Martins once supported.

Similar to the Westchester race, Democrats are seizing on growing antipathy towards the president with the hope of swaying Nassau’s slightly Democratic leaning electorate. Nassau often competes with Westchester for the distinction of highest taxed county, and property taxes have also dominated the discussion.

Cassandra Lems is running on the Green Party line.

The candidates are running to succeed Republican County Executive Kathleen Jimino, who is retiring after four four-year terms. The last four county executives have been Republicans, but some speculate that the controversies surrounding McLaughlin could turn the seat blue.

Both candidates have focused their platforms on infrastructure, particularly on rebuilding the area’s ailing water systems. While Smyth has expressed interest in exploring consolidation and cutting costs by creating service-sharing agreements between municipalities, McLaughlin has said he will be focused on ways to boost and develop the local economy.

Green Party candidate Wayne Foy is also on the ballot.

Initially, Walsh was running on just two minor ballot lines, but he scored a small victory in the primary when he managed to snag the Independence line from Republican candidate Laura Lavine -- who trails far behind in polls -- with a concerted write-in campaign targeting those voters. The additional party line will allow Walsh to appear higher on the ballot.

A recent Siena College poll shows Walsh leading Perez Williams by just two points, within the margin of error, and despite calls for party unity, Democrats are apparently divided between the two candidates.

Walsh, who previously served as economic development director for Mayor Miner, has been leading his opponent in fundraising, gaining support from influential real estate interests, and has garnered several endorsements from local Democrats breaking with the party. Meanwhile, Perez Williams, a lawyer and navy veteran, has drawn financial support from the Democratic National Committee and state Democratic Party, as well as endorsements from numerous top state and national Democratic officials including Governor Andrew Cuomo, Lt. Gov. Kathy Hochul, the mayors of Ithaca, Buffalo, and Rochester, and, most recently, former Vice President Joe Biden.

Both candidates have previously worked for the city and would make history if elected. Perez Williams would be the first Latina elected mayor of Syracuse and Walsh would be Syracuse's first mayor not affiliated with a major political party.

Green Party nominee Howie Hawkins is also seeking the seat. Joe Nicoletti, who has endorsed Perez Williams in the general, is still running on the Working Families Party line though he has reportedly stopped campaigning.

In Erie County, party affiliation can get complicated. Despite Democrats holding a lead of a nearly 135,000 voters over Republicans in Erie County, Republicans have a tight grip on many county-wide elected positions. Voter turnout tends to be lower in the heavily Democratic city of Buffalo, while Republican candidates often draw deep-pocketed donors from the more affluent and politically moderate suburban areas.

Kearns is a registered Democrat, but has disappointed Democratic leaders with some of his more conservative positions, such as his stances on women’s rights and abortion, and is running on the Republican line. Kearns touts his record of standing up against corruption; he was the first in the Assembly to call for Assembly Speaker Sheldon Silver to resign amid 2013 sexual harassment scandals and temporarily broke from his conference.

Meanwhile, Cichon, who has received financial backing from the county Democratic Party, was a Republican while working as news director at WBEN, but is now running on the Democratic line. As someone who has not been a politician before, he says he hopes he can bring civility and common sense to the administrative position.