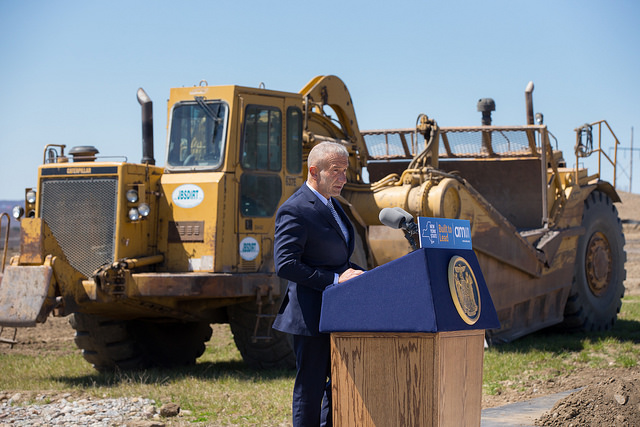 Following the recent conviction of Governor Andrew Cuomo’s longtime aide Joseph Percoco on corruption charges – a humiliating blow for a governor who once campaigned on a promise to reform Albany – Cuomo quickly sought to shift attention from the executive to the legislative branch.

A day after Percoco was convicted of fraud and soliciting bribes, Cuomo called for ethics reform – in the Assembly and Senate.

“The single best ethics reform, which makes everything else moot, is no outside income in government,” he said, pointing to the State Legislature. Jobs there are considered part-time and outside income is allowed, though the Percoco trial had nothing to do with legislators’ outside income.

Cuomo called Percoco’s behavior an “aberration” for those in his administration, and said he himself was not mentioned at the trial; in fact, Cuomo’s name or title was invoked hundreds of times. The governor has sought to quickly put the Percoco news behind him, though there are a number of unanswered questions about what Cuomo either allowed to occur under his watch, didn’t know about, or empowered Percoco to do.

Just on the horizon, too, is the trial of Alain Kaloyeros, scheduled to start June 18, proceedings sure to raise further questions about the governor’s leadership and deepen the stain on the Cuomo administration. Valerie Caproni, the same judge who presided over the Percoco trial, will oversee the Kaloyeros case.

Kaloyeros, the eccentric scientist whom Cuomo empowered to lead key parts of his Buffalo Billion revitalization initiative, is accused of bid-rigging to help developers who donated to the Cuomo campaign. Expect the trial -- which also includes alleged Kaloyeros co-conspirators -- to reveal even more damning details about how members of Cuomo’s inner circle doled out hundreds of millions of dollars through Buffalo Billion.

Cuomo announced the initiative in 2012 in hopes of revitalizing the western New York city’s struggling economy.

“The billion dollars was important for shock and awe value,” the governor said as Buffalo Billion projects got underway. “They were so down, and they had heard everything for so long, and they were so distrustful that I needed to say something that would actually get their attention and allow them to think, ‘Maybe it’s different this time.’”

Though the biggest Buffalo Billion project, a solar panel factory called SolarCity, is at the center of the Kaloyeros trial, Cuomo recently launched a sequel called Buffalo Billion II that will focus on small- and medium-sized manufacturers.

The Kaloyeros trial could shed more light on an alleged pay-to-play culture in which developers were rewarded after donating to the governor, a key aspect of the Percoco trial.

Further, for all the attention Kaloyeros received during his years as a flamboyant tech-industry pioneer, there’s the question of why he allegedly helped rig bids to ensure major campaign contributors won state contracts – without being accused of taking bribes himself. The trial might provide answers about that, too.

The federal corruption investigation prompted Kaloyeros to resign as president of SUNY Polytechnic Institute in October. Prior to the scandal, he had gained notice for bringing expensive tech projects to the state starting during the Pataki administration. Kaloyeros’ ostentatious public profile, replete with luxury sports cars and awkward social media posts, drew bemused coverage from newspapers; The New York Times dubbed him “a dapper dervish of a scientist” in 2002. His knack for persuading huge companies to invest in the state led Cuomo to call him “the closest thing to a genius I’ve ever worked with.”

For his part, Kaloyeros was never modest about his work.

“The job requires being a scientist, being a psychiatrist, being a priest, being a cop, being a negotiator, being a business developer or manager, being a teacher, being an adviser and being an ego-kisser,” he said in 2011. “I’d like to think I do all of them very well.”

John Kaehny, executive director of Reinvent Albany, said Kaloyeros “stands out as a much more independent figure than Percoco.”

“He had his own aspirations as an empire-builder and his own vision of these gigantic multibillion-dollar chip factories that were going to spur a manufacturing renaissance,” Kaehny explained.

Kaloyeros allegedly collaborated with Albany insider Todd Howe, who made a plea deal in the Kaloyeros and Percoco cases, to rig bidding for hundreds of millions of dollars’ worth of state contracts.

The indictment from the U.S Attorney for the Southern District of New York describes a scheme in which two companies – COR Development and LP Ciminelli – paid thousands of dollars in bribes to Howe. In exchange, he and Kaloyeros allegedly ensured that the developers won a range of lucrative contracts – a $15 million film studio and a $90 million manufacturing plant for COR Development; and a $225 million solar panel plant for LPCiminelli, with the cost eventually rising to $750 million, according to the indictment. All of it came from taxpayer dollars allocated toward Cuomo’s signature economic development programs.

Last week, COR Development’s President Steven Aiello was found guilty of his role in the Percoco case, while the company’s general counsel Joseph Gerardi was found not guilty. LP Ciminelli executives did not face charges in that trial. The dollar figures in the Kaloyeros trial are much larger than those in the Percoco matter. The program at play, Buffalo Billion, is inextricable from Cuomo’s record as governor, unlike anything involved in the Percoco trial – except Peroco himself and the state’s porous campaign finance system.

The indictment notes that Kaloyeros hired Howe as a consultant at the College of Nanoscale Science and Engineering (CNSE), which later became SUNY Polytechnic, as the college was crafting requests for proposals for the development projects in 2013. COR Development and LP Ciminelli allegedly made its bribes to Howe, disguised as consultancy payments and bonuses, around the same time.

The nature of the relationship between the scientist and the former lobbyist, a longtime Cuomo ally and operator in the upper echelons of state government in spite of a 2010 bank fraud conviction,  could come into sharper focus during the upcoming trial.

“The question is why exactly did Kaloyeros hire Howe, what was Howe’s role and what was Howe telling Kaloyeros to do?” said Kaehny, whose organization closely monitors state government spending. “That’s what we’ll be looking for.”

It is also not entirely clear what Kaloyeros, who was not charged with receiving bribes himself, hoped to get out of the alleged scheme. Mention of Kaloyeros’ possible motives is limited to a single sentence in the 79-page indictment:

“For his part in the scheme, Kaloyeros was able to maintain his leadership position and substantial salary at CNSE and garner support from the Office of the Governor for projects important to him, including the creation of SUNY Poly.”

Blair Horner, executive director of NYPIRG, another good government group, speculated that Kaloyeros’ role in the alleged scheme could come down to love of his work.

“He was the highest paid staff person in the state, probably in the history of the state,” Horner said, referring to Kaloyeros’ combined annual salary of more than $800,000. “It wouldn’t surprise me if it turned out he loved what he was doing and did not want to lose it,” he added, emphasizing that the charges remain to be proven.

Thus far into the corruption scandal, both prosecutors and journalists have mostly focused on the alleged bribery, the players involved, and their ties to Cuomo.

But the investigation also raises questions about apparent favoritism for developers who gave big to Cuomo’s campaign accounts.

The indictment notes that Howe and Kaloyeros allegedly began crafting bids to favor COR Development and LP Ciminelli in 2013, after the governor had launched his Buffalo Billion initiative and executives from the companies “had each made sizable contributions to the Governor.”

The indictment does not detail the contributions, and none of the federal charges against Kaloyeros or the other defendants appear to directly stem from campaign finance law.

However, the investigations prompted Cuomo’s reelection campaign to “set aside” a total of roughly $350,000 in contributions from COR Development and LP Ciminelli. Last fall, a Democratic official told lohud.com the move would enable authorities to recover the funds, pending the outcome of the trials.

Discussing COR Development and LP Ciminelli’s campaign contributions, Kaehny said, “It’s fairly shocking that a business or a group could donate essentially unlimited amounts of money to the governor and legislature while they’re trying to get state contracts or state grants.”

“The [Percoco] trial spotlights state laws that are so weak that what’s unethical is legal,” he added. New York State has no “doing business” restrictions on campaign donations. In New York City, entities on the “doing business” list are limited to about $400 in donations to an individual candidate.

Government watchdogs, and a few elected officials, hope the trials will give renewed momentum to long-stalled proposals for a range of reforms.

“I think the most important questions are ones not only about how the state can prevent future wrongdoing, but also what investments make sense for the state going forward, which may or may not come out” of the trials, said David Friedfel, director of state studies for the Citizens Budget Commission. Corruption or not, there have been ongoing questions about the Cuomo approach to economic development spending.

Reinvent Albany, NYPIRG, and other watchdogs have long called for tighter controls on campaign contributions, including closing the so-called LLC loophole, which featured prominently during the Percoco trial. It emerged that developers were encouraged to donate heavily to Cuomo, through several limited liability corporations that would help mask the contributors.

Good government groups also emphasize the need for greater transparency for state spending, through measures like restoring the state comptroller’s power to pre-approve contracts. Cuomo and legislative leaders took away that power in 2011.

Additionally, watchdogs hope the trials will boost support of a proposed “Database of Deals” that would list all state projects awarded to companies and detail the return on investment to taxpayers.

“The most important thing is that when people serve in government, they have a moral compass,” he said. “If people don’t have that compass, they’re going to go astray.

“However, there are things the state could and should be doing to deter and make it more difficult for those actions to occur. Those are actions that enhance transparency and accountability.”

While Cuomo has a long list of ethics reforms again in his platform this year, including closure of the LLC loophole, he has not been outspoken in pushing for them.

The governor’s campaign finances will again be on the stand, so to speak, during the Kaloyeros trial, which will begin as election season is heating up, with spring party nominating conventions.

Cynthia Nixon’s dramatic entrance into the gubernatorial race, challenging Cuomo in this year’s Democratic primary, included a focus on corruption. She named Percoco from the podium at her launch event in Brooklyn on Tuesday, leveling a variety of blistering criticism at the governor.

Nixon is likely to have ample opportunity to connect Cuomo to the trial, as will other gubernatorial candidates, like expected Republican nominee Marc Molinaro, currently Dutchess County Executive.

Whatever the long-term consequences of the Kaloyeros trial, observers expect it to go more smoothly than the Percoco case, in which jurors were deadlocked twice before reaching guilty verdicts on some of the counts.

Discussing the Kaloyeros case, Kaehny said, “It’s simpler, more straightforward, and the email evidence is quite strong in favor of the prosecution.”

Note: this article has been updated to reflet the Kaloyeros trial being moved back one week, to a June 18 start.