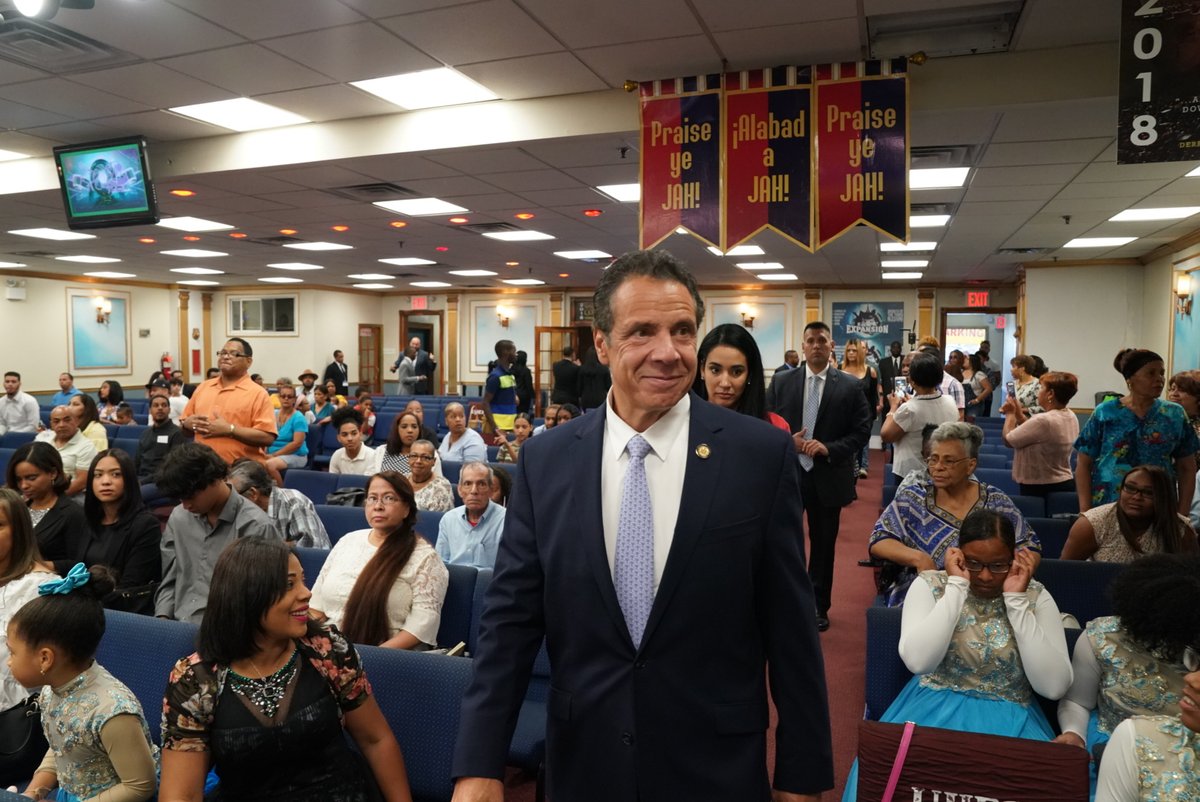 Governor Andrew Cuomo, emboldened after a sizeable Democratic primary victory, and an invigorated progressive movement with recent wins of its own, are again forced to grapple with the rift between them, as the factions must decide what steps they are willing to take to unite in the aftermath of a contentious primary season.

Facing a handful of general election opponents led by Republican Marc Molinaro, Cuomo has given mixed signals to the 500,000-plus voters who chose Cynthia Nixon on September 13, many of whom likely helped lift a group of left-wing challengers over seven sitting state senators. Some of those challengers -- Molinaro, Green Party nominee Howie Hawkins, independent Stephanie Miner, and Libertarian Larry Sharpe -- have begun making direct appeals to Nixon voters, while Cuomo has not.

Before the end of next week, one of the governor’s chief progressive critics, the Working Families Party, is expected to have determined what to do with its ballot line after Cuomo defeated its first choice in round one. The WFP nominated Nixon for governor and Jumaane Williams for lieutenant governor, but saw them both lose in the Democratic primary, throwing into question whether the two will actually appear as WFP candidates on the November ballot. Party members will in the coming days decide via internal meetings who they are willing to support in November.

The party may offer its ballot line to Cuomo, who has downplayed the magnitude of his left-wing critics after he won two-thirds of the primary vote and openly warred with the WFP for years, including since just after it agreed to nominate him in 2014.

As NY1’s Zack Fink reported Monday, WFP leaders will meet privately on Wednesday to discuss the party’s next steps, and will the following Wednesday convene in a public meeting as a full WFP state committee, apparently to vote on a general election slate for governor and lieutenant governor, as well as an attorney general candidate. (The party had previously installed a placeholder, while expressing support for both Zephyr Teachout and primary winner Letitia James).

The impending decision will come after the WFP backed Nixon, who took up the cause of the state’s disgruntled progressives frustrated with Cuomo’s centrist triangulation on a host of issues, enabled in part by his support of a Republican state Senate bolstered by breakaway Democrats. With just six weeks until Election Day, November 6, the WFP is faced with the decision of backing a governor with whom it has had a deeply antagonistic relationship — and who has thus far declined to extend an olive branch to the WFP and more broadly those to the left of Cuomo — or a candidate who has little-to-no chance of becoming governor, possibly putting a dent in Cuomo’s vote total.

The WFP, notably, needs at least 50,000 votes on its ballot line for its gubernatorial candidate in order to keep that automatic line in elections for the next four years. If no alternative move is made, Nixon and Williams would remain on the line. (Governor and lieutenant governor are voted on separately in party primaries but as a ticket in the general). A back-up plan for removing Nixon from the gubernatorial ballot line — a somewhat tricky process — has been in place for months, with the WFP and Nixon acknowledging that her chances in the primary were slim and pledging not to play “spoiler” in the general election by peeling away votes from Cuomo.

The party will answer the looming question of whether to leave Nixon on its line, pick Cuomo, which would necessitate a deal with the notoriously score-keeping governor, or possibly someone else, based on what members believe is best for the causes it champons, the party’s political director, Bill Lipton, told Gotham Gazette on Monday.

“The WFP is having its own internal deliberations,” Lipton said by phone. “We’ll be having meetings, phone calls and other communications, where people are going to air their views, and, as has been oft-stated, the candidates, the leadership, the grassroots members of the WFP will be arriving at a decision together.”

Lipton declined to say if any discussions with Cuomo’s camp had occurred in recent weeks.

“We’re focused on our internal deliberations and doing what’s best for working families in New York State,” he said.

Additionally, Lipton said the WFP has, as expected, been communicating with Nixon and Williams, the Brooklyn City Council member who ran against incumbent Lieutenant Governor Kathy Hochul in the primary. “We’re going to talk a lot with Cynthia and Jumaane,” Lipton said. “We consider them part of our community.”

Nixon has made no public comments since her primary night concessive speech, which was celebratory and forward-looking. A top Nixon campaign operative was noncommittal when asked about the matter last week.

“I don’t want to divulge much,” Nixon campaign chief strategist Rebecca Katz said on the Max and Murphy podcast. “There will be some answers, and they will be coming soon.” Katz went on to acknowledge that Nixon had previously said she’d prefer Cuomo to Molinaro, and reiterated that Nixon has always been and will remain a Democrat.

Though Nixon came up well short of defeating Cuomo, all but two of the eight challengers to former members of the Independent Democratic Conference — a group of breakaway Democrats allied with Republicans in the State Senate — pulled off victories that shook up the New York political world. Additionally, left-wing insurgent Julia Salazar knocked off veteran state Senator Martin Dilan. All nine Senate challengers were backed by the WFP. But Cuomo said in his defiant post-primary press conference that their success did not serve as a rejection of his brand of progressivism.

Though Cuomo had given his tacit support and generic endorsement to his fellow Democratic incumbents as part of the April unity deal that brought the IDC back to the mainline Democratic fold, the governor downplayed the results and anything they might say about the extent to which his leadership was rebuked by voters.

Democrats clearly approved of his get-things-done, somewhat-tempered progressivism, the governor explained the day after the primary, pointing to his margin of victory — 65.6 percent to Nixon’s 34.4 percent — even with a major boom in turnout from four years ago, when he prevailed by a similar percentage over Zephyr Teachout. While the former IDC members struggled immensely, the two Cuomo-endorsed statewide candidates — Hochul and James — won their hotly-contested primaries.

What many deemed a progressive wave was “not even a ripple,” the two-term governor said the day after the primary, throwing cold water on the narrative that the primary was part of a surge in popularity of a Democratic vision in stark contrast to his.

“Where was that effect yesterday?” Cuomo said of a supposed progressive wave in the state, represented by the candidacies of Nixon and Alexandria Ocasio-Cortez. “Where was it?”

“It was upstate. It was downstate, white, black, brown — it was across the board,” he said of the coalition that contributed to his decisive win.

He added the victory proved that he and New York Democrats “provided and achieved progress,” which was the “message” voters delivered in the election.

But what about those 500,000 Nixon voters and the disenchanted left they represent? Will they rally behind Cuomo, beaming with confidence and dismissiveness, as the Democratic nominee? Will WFP members swallow the indignity of offering him their ballot line?

At least two of the leaders of the successful primary purity push backed by the WFP are staying out of the fray.

“He looks forward to continuing to fight side by side with them on progressive issues,” Richardson said.

David Neustadt, a spokesperson for Alessandra Biaggi, who defeated former IDC leader Jeff Klein, said in a statement that Biaggi is “supporting the Democratic Party nominees for Governor, Lt. Governor and Attorney General.” He declined to say whether Biaggi has a preference on the WFP’s choice, but said the candidate “respects the internal democratic process of the WFP, which appropriately allows the members of the Party to determine whom that party endorses."

Rachel May, who prevailed over former IDC member David Valesky in her primary and like Myrie and Biaggi received Nixon’s support, said she believed Cuomo is the definitive leader of the Democratic Party, and is open to the WFP handing the ballot line to Cuomo.

“I’m not categorically opposed to it,” she explained. “I was running for Democratic unity all along. That’s what our whole campaign against the IDC was about. And so I feel like Democratic voters have spoken about who should be the standard-bearer moving forward.”

“I supported her in the primary but I think I would encourage her not to campaign actively against the governor in the general,” May said of Nixon.

May stopped short of saying it is her preference that the WFP give Cuomo its nomination. “I’m willing to only say ‘I will not object,’” she said.

May, who said the governor’s team was among the first to congratulate her after the primary, went on to speak to the need of uniting the warring factions of the party — something Cuomo and his team have been loathe to do following the primary. Cuomo, for example, made no mention of Nixon or her supporters during an event billed as a unity rally held the week after the election.

“I want to work together with whoever is elected governor. It’s looking more and more like Governor Cuomo,” said May, who may be facing a tough general election that could include Valesky on the Independence and Women’s Equality ballot lines, both of which Cuomo also has. “I think the less we divide the more progressive voters the better, at this point.”

Asked if Cuomo’s post-primary press conference — where he did more spiking the football than calling for party unity — worked toward that goal, May said Cuomo and his allies are “eager to work with Democrats moving forward.”

“I feel like we we’re going to all get on the same page,” she continued. “We still need reform in Albany. It’s not going to be a rubber stamp Senate for [Cuomo]. So I understand that, but I also understand that he wants to work with us.”