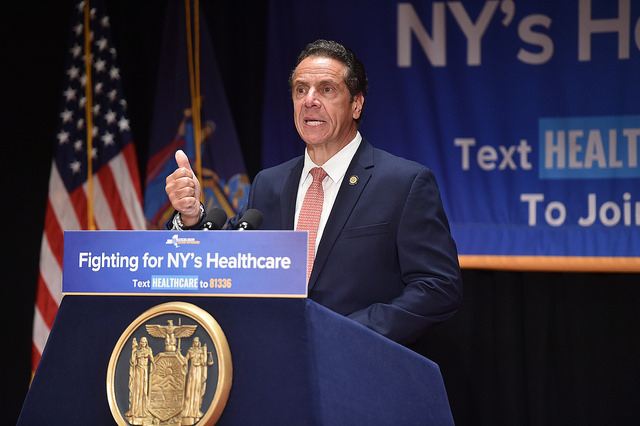 Though Governor Andrew Cuomo has not expressed support for instituting a single-payer health care system in New York, his fellow Democrats campaigned on the issue as they flipped control of the state Senate, landing all of state government into Democratic hands and providing a significant boost of optimism to the lead sponsors of the New York Health Act, which would create a government-administered single-payer health care system.

The bill has passed the Democrat-dominated state Assembly several times and all the members of Senate Democratic conference signed on as co-sponsors at the end of last legislative session in a unified show of support for the program heading into the election season.

Cuomo has said he supports a Medicare for all-type system at the federal level, but cast doubts on the cost and complexity of doing it in New York, and since their resounding wins on Election Day, the incoming leaders of the Democratic Senate majority have indicated that the massive undertaking of single-payer is not at the top of the agenda.

Still, with Democratic control of the Senate and the Assembly by wide margins, single-payer healthcare could be passed as early as the 2019 session, according to Assemblymember Richard Gottfried, chair of the Assembly Health Committee and lead sponsor of the New York Health Act.

“It was clear in the country and New York that healthcare was the number one issue on voters’ minds,” Gottfried said, before pointing to his legislation. “A solid majority of the new state Senate has either been a cosigner, voted for it in the Assembly, or campaigned on it. So I think we’re on track to get it passed in the Assembly and state Senate.”

The New York Health Act would replace health insurance companies with New York state government as the payer of healthcare costs for all New Yorkers. It has been passed in the Assembly four years running but has yet to be voted on in the Senate, where Republicans have held control. All of the other 30 Democratic senators joined lead sponsor Senator Gustavo Rivera of the Bronx to co-sponsor the legislation, though the Senate Democratic conference is seeing significant turnover due to primary wins by insurgent challengers. But, those challengers have in general been even more vocally supportive of single-payer health care than their more moderate predecessors. These facts give Gottfried confidence that the New York Health Act will pass during the 2019 session, which begins in January.

But the bill still faces an uphill battle, in part because of the massive changes it would institute, and the fact that though it might reduce overall individual and business healthcare costs after implementation, for the state to run the system it would require raising taxes significantly, something many Democrats have promised not to do and Cuomo is vehemently opposed to. It would also drastically impact the state’s private and public hospitals, the health insurance industry, and more. Some of the changes would of course be beneficial to New Yorkers, but the undertaking is complex and the New York Health Act as currently written leaves a lot of detail undetermined, including funding.

The governor has repeatedly opposed single-payer healthcare at the state level, suggesting that it would be more rational and financially feasible if administered by the federal government. Cuomo questioned in the past how a single-payer system could be put in place without doubling the tax burden, and cited California’s and Vermont’s debates over single-payer — which both ended when supporters were not able to answer one question: where would the funding come from? — as paragons of the impracticality of state-level single-payer.

Gottfried, a Manhattan Democrat, is confident that with his fellow lead sponsor Senator Rivera, who is likely to be the Senate health committee chair come January, and other legislators, he will be able to sway Cuomo to support the legislation.

“He’s obviously not on board yet, but he and his staff are very open to working with the Legislature on the issue,” Gottfried said. “I’m convinced we can satisfy their concerns.”

And after a recent study by RAND Corporation concluded that the New York Health Act would result in a reduction of administrative costs, provide all New Yorkers with healthcare, and reduce healthcare costs for most, Gottfried says the financing of the bill will not be a problem.

“New Yorkers are all going to have to think about what they will do with the hundreds of thousands of dollars that will end up in their pockets, and that’s a nice problem to have,” Gottfried said.

The study has a caveat, however, stating in its conclusion that “the estimated effects depend heavily on the assumptions about provider payments, administrative costs and drug prices.” Politico highlighted these assumptions as well as the likely tax increases that have largely been brushed aside by Democrats supporting the legislation. Wealthy people leaving the state, companies restructuring, the cost of hospital expenses rising at a faster rate or the Trump administration not issuing a federal waiver to redirect all healthcare-related funds to the new state entity are all possible events that could result in RAND’s conclusion falling apart.

For it to work, while health care costs drop, taxes would undoubtedly increase significantly for many New Yorkers. As cited by Politico, “a household reporting $150,000 in income would see its state tax rate increase from 6.45 percent in 2017 to 18.3 percent,” under one model scenario. Additionally, those who receive Medicaid or fall under the state’s Essential Plan, which subsidizes health insurance for low-income New Yorkers, have less to gain from the expansion. According to RAND, though, 1.2 million New Yorkers would gain health coverage.

It is likely that funds for New York single-payer health care would partially come from a new payroll tax, which RAND projects to fall largely on employers. However, RAND suggests the health act payroll tax would cost less for businesses already contributing toward employee health insurance and the Medicare payroll tax, estimating decreases in employer costs fairly quickly.

Concerns about businesses and high-income individuals leaving the state persist, with a tax atmosphere in New York that many, including Cuomo, acknowledge is already burdensome and became more so for many taxpayers, especially top earners, under the new federal tax code.

Senator Rivera, aware that cost is the primary argument against single-payer health care, repeatedly emphasized the need to work towards a version of the bill that would reduce the financial strain.

“I will continue working diligently with Assembly Member Gottfried, Senate Majority Leader Stewart-Cousins and the Senate Democratic Conference to make the New York Health Act a bill that is not only fiscally responsible, but that provides comprehensive coverage to all New Yorkers,” Rivera wrote in an email to Gotham Gazette.

The bill and its potential ramifications have been studied closely by Bill Hammond, director of health policy at The Empire Center, a think tank. "Regardless of which party controls the state Senate, the New York Health Act remains a wildly unrealistic idea," Hammond said by email. "It means putting New York's entire health-care system — representing one-fifth of the economy — in the hands of the same state government that struggles to run the subways. It requires massive, draconian tax hikes, enough to roughly triple total state revenues."

"Plus, a true single-payer plan would need federal waivers that the Trump administration has vowed to block," Hammond continued, also noting a political angle -- that if Democrats spend great sums of money and political capital on a health care overhaul of this magnitude, what will they ignore, like fighting climate change or improving mass transit.

"It was easy to cast a symbolic yes vote for a single-payer bill that had no chance of passing," Hammond said. "Now that that it might actually happen, supporters are going to be forced to confront the practical realities. Then, hopefully, they’ll focus on helping the 6% of New Yorkers who still lack insurance, rather than disrupting coverage for those who already have it."

Rivera acknowledged that moving to single-payer would not satisfy everyone, especially those who benefit from the current system, and that there are negotiations to come that will likely adjust the bill to make it more palatable to holdouts.

“The biggest challenge will be to reach a consensus among stakeholders that the NY Health Act is feasible [and] fiscally responsible,” Rivera wrote.

“Our main priority for the next legislative session is to continue shaping the bill so that it is feasible, affordable, that the Governor is willing to sign, and that primarily, provides quality healthcare for everybody,” Rivera wrote. “During the next legislative session, we will focus on making the necessary amendments to the bill so that it truly reflects the different healthcare needs affecting all New Yorkers.”

For now, it is very difficult to imagine Cuomo coming on board, especially given the pains he’s taken to keep state spending increases at around 2 percent per year and to lower taxes. Asked about single-payer health care during a Thursday appearance on The Capitol Pressroom with host Susan Arbetter, Cuomo painted it as unrealistic given budget constraints. He said Democrats are generally in agreement on the concept, but legislators will have to deal with reality in working with him on a state budget next year, while he also said he thinks it's much more workable on the federal level. “Single-payer health plan, for example," Cuomo said, "conceptually I think it’s the right way to go in. I believe it’s more feasible financially on the national level. No state has been able to finance the transition costs.”

A variety of factors, including the challenge of getting Cuomo’s support and not wanting to come into power quickly pursuing something as revolutionary as single-payer health care, may be why the likely next Senate majority leader, Andrea Stewart-Cousins, and her likely deputy, Senator Michael Gianaris, have not highlighted it as top priorities for the coming session.

Assemblymember Gottfried noted that state Senators’ public approval of the bill gives him no reason not to “take them at their word,” and said he expects the legislation to move through the Legislature. He knows that private health insurers are certain to vehemently oppose the continued push.

“The insurance industry will be fiercely lobbying against the bill and they have a lot of money, going up against their lobbying will take a lot of work,” Gottfried said. “but I’m convinced with so many senators on the record in support of the bill, we will prevail.”

This article has been updated with Cuomo's comments from 11/15/18 on The Capitol Pressroom.