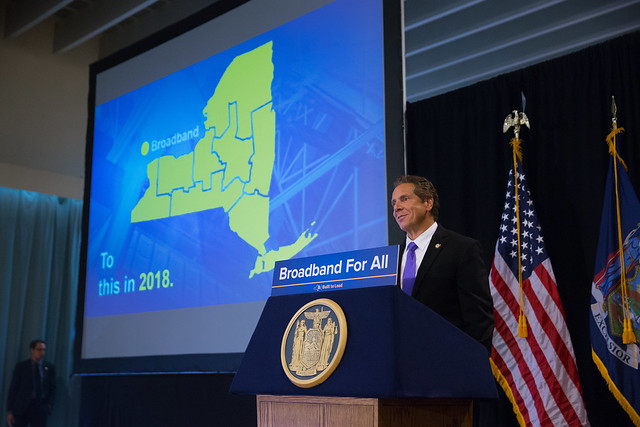 Leaders in civic technology, including elected and appointed government officials, appeared at a forum Monday to discuss the necessary next steps to bridge New York’s gaps in internet access and digital literacy.

It is essential, they said, that New Yorkers not only have access to the web, for a variety of reasons including job and housing opportunities, but that they are skilled enough to use it. And both gaps must be bridged, they explained, not only in the state’s rural areas, but also in urban areas with high levels of internet isolation.

The forum, hosted by New York Law School, was addressed by Manhattan Borough President Gale Brewer; Josh Breitbart, the de Blasio administration’s Deputy Chief Technology Officer; and Karim Camara, the head of Governor Cuomo’s Office of Faith Based Community Development Services. All three officials addressed the critical need for universal, equitable access to the internet and digital technology, and to ensure that certain, often marginalized groups are not left behind.

Civic technology, and the way government can broaden access to and interest in the digital world as it becomes more and more essential to everyday life, is due to play a major role in upcoming public policy debates. The 2020 U.S. Census will be the first decennial federal census to be largely conducted online. In addition to the various controversies associated with the Trump administration’s handling of the census, most notably the proposed citizenship question, a mostly-online census threatens to undercount communities with limited access to the internet, such as the elderly or low-income people.

New York City and State governments are investing in census outreach programs for the coming year, with the city planning to fund an initiative to place help desks in libraries and public schools to assist those lacking tech access to complete the census. An incomplete count would put New York’s share of federal funding and its representation in Congress in jeopardy.

“We may have areas that are not counted because they don’t have the technology. And isn’t that ironic, because they’re gonna lose federal funds that could help their community because we’re not helping their community now,” Camara said in his closing address to the forum. “And so I think that’s so critical, and why this discussion is something that’s an urgent discussion.”

The recently passed state budget included $20 million in census outreach funding, half of what advocates called for, and the mayor’s executive budget plan includes $26 million for such funding, again less than the $40 million advocates said should be dedicated to working with nonprofit and other organizations to help ensure a full count.

“With the census coming, it’s gonna be a big challenge making sure that there is enough technology in the libraries and the non-profit community to end up supporting those who are not tech savvy,” Brewer said. In her speech, Brewer highlighted other initiatives her office has either worked on or is working on, such as equity in broadband access across public schools and assisting community boards in learning how to use the city’s open data portal.

The notion that certain communities are being left behind in the technologized world permeated throughout the conference. Breitbart discussed the challenges of both providing affordable, easy-to-use internet access to all communities while also preventing the proliferation of scams, hacks, racist abuse, and fake news from negatively affecting them.

“We can’t solve the digital divide having internet that exists that way,” Breitbart said, noting that the city is working on municipal wifi infrastructure beyond Link NYC kiosks, which replaced payphones, while also hosting workshops at libraries and other municipal spaces to assist seniors and others in the identification of threats and negative trends.

Several speakers highlighted that policymakers often neglect broadband coverage and usage gaps in urban areas in favor of proposing solutions for rural areas, having a disproportionately negative effect on residents of color. “Digital exclusion,” as some speakers described the phenomenon, not only prevents people from watching videos of cats, but also from searching for housing, applyong for jobs, and accessing social services, among other things.

“We need federal lawmakers, as well as state lawmakers, to understand that the digital divide still exists within urban communities,” Turner Lee said, noting that while rural communities should not be left out of the picture, focusing only on the lack of access in those communities ignores a vast swath of unconnected people.

“It’s disheartening when you go to a city like Hartford, Connecticut, and black girls still have to walk to McDonald’s to get wifi access to finish their homework,” Turner Lee said. “That’s disheartening. And so we have to work on lawmakers to understand that, even though there may be less market failure in urban areas, it does not mean that they’re not deserving of the same type of access.”

Rural residents were not left out of the conversation at the forum, though. Camara noted the state’s efforts in his remarks, citing the Cuomo administration’s $500 million commitment of state subsidies to expand high-speed broadband to rural regions lacking connectivity, with the state incentivizing the private sector to provide 100 mbps speeds to most underserved regions and 25 mbps to the most remote areas.

The program has apparently been successful, with Cuomo claiming that the state has cut the percentage of New Yorkers without high speed broadband access down from 30% in 2015 to 2% last year.

This puts New York ahead of the nation at large on broadband access. The FCC’s 2018 Broadband Progress Report found that 6% of Americans still lack access to fixed broadband service, and in rural areas that proportion is approaching a quarter of the population. And despite strides in ensuring access to broadband, “approximately 100 million Americans still do not subscribe.”

“We’re certainly making progress,” Camara said, “but broadband development and rolling out at a cost point affordable to most people is still very challenging work, and we still have a lot of work to do.”