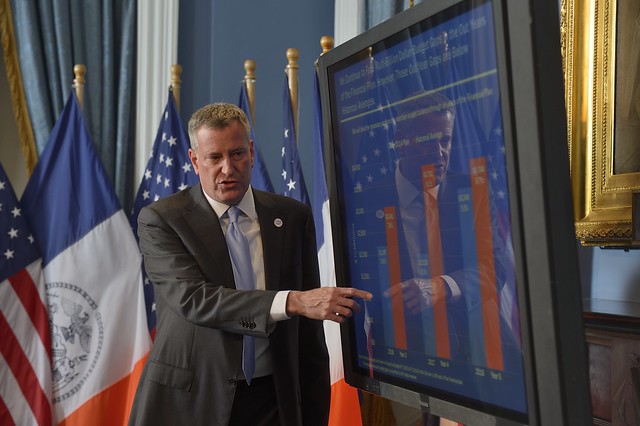 Mayor Bill de Blasio released on Thursday a $92.5 billion executive budget for the 2020 fiscal year that begins July 1, an increase of about $300 million from his preliminary proposal in February and nearly $3.4 billion more than the budget adopted last year.

De Blasio’s latest budget plan will become the basis for City Council hearings and negotiations between the administration and the Council before a budget deal is reached in June. The next budget will again mark a record high for city spending, which has increased by about $20 billion since de Blasio took office in 2014.

The administration is not funding many new initiatives this year, with the mayor predicting an era of “fiscal caution” ahead as both the economy and tax revenue growth slow. Most of the increased spending planned for next fiscal year owes to labor contract agreements settled by the administration, which added about $1 billion alone, and hundreds of millions for broad education aid, debt service payments, expanding the 3-K for All early childhood education program, charter school costs, and fringe benefits for city workers.

De Blasio emphasized that the future of the economy remains uncertain and that the last few months have shed little light on what the city can expect both from the national and global economy.

“We at this point are looking at so many contradictory developments, we don’t have a way to make full sense of them, is the truth,” he said. “The volatility of the policy changes in Washington are impossible to trace at this point...Nothing has changed since preliminary. We still are worried and that’s why we kept this very modest.”

The few “strategic investments” outlined in the executive budget include $60 million to retrofit city buildings to cut carbon emissions, $22 million to fund outreach efforts for the 2020 Census, $15 million to expand the “Fly Car” emergency vehicle program in the Bronx, $12 million in baselined funding for services for students in homeless shelters, and $6 million to fund emergency repairs at NYCHA community centers.

The Census funding quickly caught the eye of Council Speaker Corey Johnson, who insisted that the city must provide $40 million for outreach as the Council has requested. That $18 million difference may make one focal point of de Blasio-Council negotiations over the coming months.

In past years, de Blasio has relied on a Citywide Savings Program, calling on agencies to voluntarily identify cuts in spendings through efficiencies and reassessing costs. But this year, the mayor instituted a Program to Eliminate the Gap (PEG) for the first time, following the example of former Mayor Michael Bloomberg, and mandated a $545 million target reduction for a list of agencies to meet. The administration also expanded a hiring freeze which, together with the PEG, was meant to find $750 million in savings across the current and next fiscal year.

De Blasio’s executive budget surpassed that target and includes $916 million in savings, he said; $629 million came from the PEG, including $104 million at the Department of Education. Notably, the administration cut $9 million in planned spending for the ThriveNYC mental health initiative, which is run by First Lady Chirlane McCray and has come under scrutiny in the last few months for a lack of clarity in its budgeting, performance metrics, and results. The City Council had pushed to cut about $50 million from the planned spending on the broad program, which is projected to spend about $241 million in the 2020 fiscal year.

The city did manage to avoid some funding cuts and unfunded mandates it expected from the state, but will, according to the mayor, still have to shell out more than $300 million to provide financial assistance to needy families, fund election reforms recently approved by the state, and fill gaps in education funding and health services. The cost is about half the original burden that was estimated at more than $600 million, which had been the de Blasio administration expectation before the state budget was finalized with less pain for the city.

De Blasio said he holds out hope that the $96 million in costs for implementing election reforms -- including early voting and electronic poll books -- could be mitigated. “We’re still hopeful of some state support but nothing is guaranteed at this moment,” he said, forcing the city to account for it in the budget. The state included funding for localities for implementing both measures in the new budget, but those outlays have not been clarified yet.

The executive budget does not add to the city’s reserves but continues to maintain them at the same levels as last year including $1 billion in the general reserve, $250 million in the capital stabilization reserve and $4.47 billion in the Retiree Health Benefits Trust Fund. Comptroller Scott Stringer has urged the administration to increase the reserves so the city has a budget cushion of roughly 15% of total spending, up from the current level of about 11%. The City Council, in its response to the preliminary budget, similarly called for at least $250 million in additional rainy day funds.

In response to de Blasio's executive budget, Council Speaker Johnson, Council Member Daniel Dromm, who chairs the finance committee, and Council Member Vanessa Gibson, who chairs the capital budget subcommittee, issued a joint statement. "The Council is disappointed that Mayor de Blasio has failed to fund many significant citywide Council priorities in the Fiscal 2020 Executive Budget, including many social service programs as well as $250 million in reserves."

They went on to reiterate their demand for more savings and said that "by not funding vital services, the de Blasio Administration is engaging in the same 'budget dance' that it had once pledged to end. This is completely unfair to the nonprofits who run these programs and who are now unable to plan their future."

"The Council will continue to fight for our priorities and programs that make our City stronger," the statement continues. "That includes Fair Student Funding and pay parity for human service providers and early childhood educators," as well as the additional Census outreach funds. "We look forward to the upcoming Executive Budget hearings," they concluded.

The mayor’s executive budget plan for fiscal year 2020 operating expenditures is also accompanied by the capital spending plan. De Blasio’s updated 10-year capital strategy is now expected to cost $116.9 billion, up from $104.1 billion proposed in the preliminary budget. It includes $16.4 billion for school facilities, $13.1 billion for road and bridge repair, $9.7 billion to preserve affordable housing, $8.7 billion to build borough-based jails, and $6.5 billion for maintaining sewer and water infrastructure. De Blasio said the construction of the jails and this the move off Rikers Island was also expected to be completed by 2026, a year earlier than initially projected.

“This administration believes in aggressive capital spending,” de Blasio said, though he insisted it’s done with a “watchful eye” on city debt and the broader economic outlook. He noted that the city’s bond rating was recently upgraded by Moody’s Investors Services, a sign of responsible fiscal management, and also emphasized the absence of an infrastructure plan at the federal level.