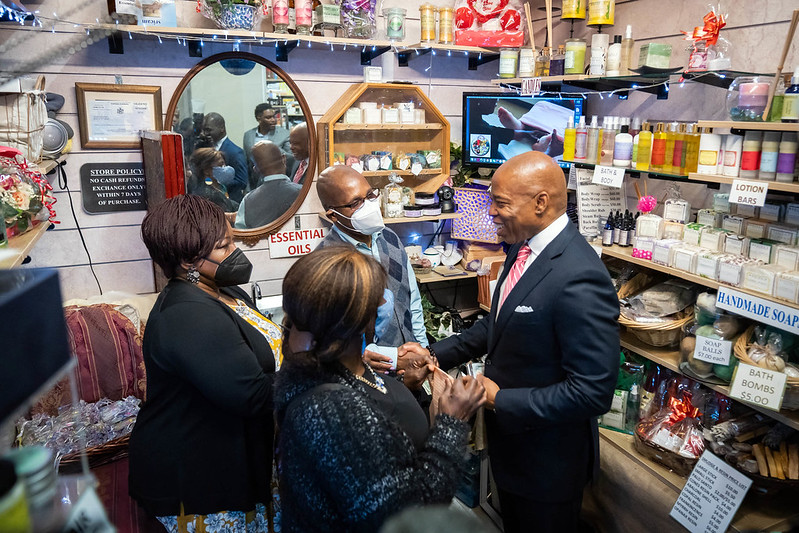 One of Mayor Eric Adams’ main gripes with city government is that it is too inefficient, part of rampant dysfunction that exacerbates inequality and stifles growth. There’s far too much red tape and redundancy between city agencies and New Yorkers looking to them for services, the new mayor says. And he’s vowed to ease that access by launching an online portal that will allow people to apply for city benefits, services, and permits at the touch of a button.

When he was running for mayor, Adams proposed to create a centralized portal, dubbed “MyCity,” which would allow New Yorkers to apply online for all manner of city services. During the 2021 race, Adams’ campaign told Gotham Gazette that it was the centerpiece of the candidate’s signature “People’s Plan.” When implemented, New Yorkers would avail themselves of benefits such as the Supplemental Nutrition Assistance Program (also known as food stamps), rental assistance, and unemployment benefits, and even apply for business licenses, permits, and more.

In his State of the State speech in April, as he outlined his vision for the city, Adams -- a Democrat who took office January 1 -- said the first function available on the portal would be a “unified application process for all subsidized child care options offered by the city.”

“We know that working parents don’t have time to navigate complex bureaucracy to get their children care, and we are going to make sure that city government works for them,” he said in the speech, just after the state had approved massive new funding and tax breaks to expand child care access that Adams had advocated for.

The MyCity portal is currently under development by the Mayor’s Office of Technology and Innovation (OTI), which Adams created in January to consolidate the city’s various technology-related offices. According to an administration official who spoke on background, the office aims to launch the portal later this year, offering the child care application.

OTI is creating the portal in-house, breaking from the traditional government method of farming out technology projects to private firms, which is a crucial measure to ensure its success, according to civic technologists. OTI officials have spent the last few months scoping out how child care enrollment works in the city through the various agencies that provide it and are now surveying parents and caregivers about how they apply for child care benefits, to ensure a user-friendly portal. The office is also looking at broader tech tools such as a digital wallet that would allow online transactions for users, according to the administration spokesperson.

New York City currently does offer online access for direct cash benefits through the AccessHRA system run by the Human Resources Administration. Eventually, that system is expected to be integrated with the MyCity portal, the OTI official said.

“A one-stop shop for city services is a civic tech dream,” said Noel Hidalgo, executive director of BetaNYC, a civic technology group. Hidalgo served on Adams’ mayoral transition team in the technology group and was among the people advising incoming administration officials on the creation of the MyCity portal.

Hidalgo acknowledged that the portal is a massive undertaking. It requires integrating various data systems that aren’t necessarily designed to work together. It will need systems for secure logins, unified payment and ticket tracking. And it will have to be easy to use.

The city hasn’t always had a good track record with online portals. Just recently, during the pandemic, the city’s vaccination appointment system was plagued by problems, with many New Yorkers turning to an outside program, TurboVax, created by independent software designer Huge Ma. Just last week, the city again ran into trouble in setting up vaccination appointments for MonkeyPox, with City Health Commissioner Ashwin Vasan pointing to “technical difficulties” with an outside vendor.

“There's like a technical problem and then there's a usability problem and that this administration will need to really figure out,” Hidalgo said, “to make sure that these tools are going to be used by everyday New Yorkers that speak a number of different languages and that interface with government services from a couple of different platforms.”

Menin chairs the small business committee and has previously served as commissioner of the city’s Department of Consumer and Worker Protection, as well as the Mayor’s Office of Media and Entertainment, and as 2020 NYC Census Director. She also used to own a small business. “I really know firsthand that small businesses are struggling with onerous regulations and bureaucracy having to deal with an alphabet soup of city agencies,” she said, echoing the mayor’s critiques of city government.

“I know firsthand how city agencies are often siloed and are not really communicating with each other,” Menin added.

The mayor did promise in his “Rebuild, Renew, Reinvent” blueprint for the city’s economic recovery that the administration will launch a one-stop-shop business portal that will allow businesses to interact with city government in real time, letting them track filings, permits, inspections, and more. Menin’s bill could mandate it in law.  “We greatly appreciate the Council’s support for this effort and will work with you to ensure that it comes to fruition,” said Calvin Brown, Assistant Commissioner for Neighborhood Development for SBS, at a June 9 hearing on Menin’s bill.