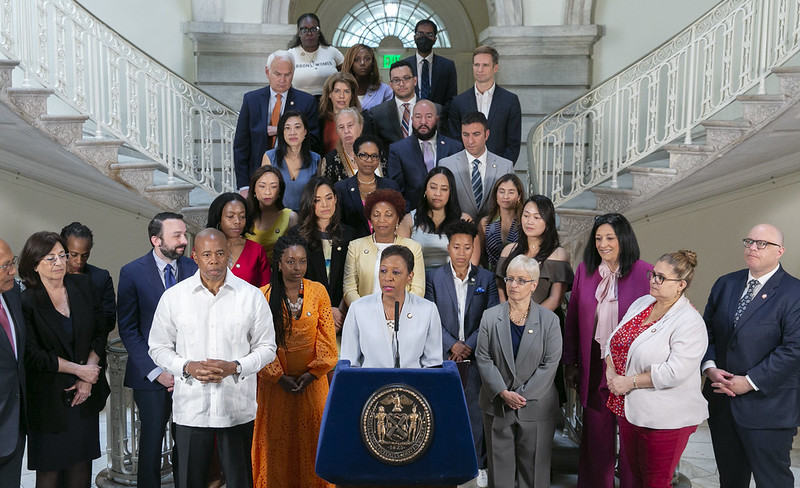 In a near-unanimous vote, the New York City Districting Commission voted on Thursday to send its latest plan for redrawing the 51 City Council districts to the Council for its review. The Council now has three weeks to either approve the map or reject it and send it back to the Commission with proposed changes.

The Commission’s latest proposal made few major changes to a proposed map that a majority of members voted down last month in a surprising turn of events in part based on influence from Mayor Eric Adams’ administration. That draft map had undone or altered a number of controversial aspects of the preliminary map the commission passed in July, which was then the subject of extensive public feedback.

Commission members who voted against the recent proposal cited various concerns, including about the dilution of political power among certain communities and a slight weakening of Staten Island’s influence in the Council.

After that proposal was rejected, the Commission held two hearings where they publicly redrew district lines, seemingly assuaging members’ concerns despite making just minor alterations. On Thursday, of the 15 members on the commission, 13 voted in favor of the new map. Only Michael Schnall, who was appointed by Council Speaker Adrienne Adams, voted against the proposal, while Maria Mateo, a mayoral appointee, had to leave the meeting before casting her vote due to a professional commitment.

“I think we have done a really excellent job,” said Commission Chair Dennis Walcott, who was appointed by the mayor, at the meeting, “in the amount of time we both devoted to the mapping but also I think the respect that we've shown each other as commissioners in trying to make sure the various issues have been addressed to the best of our ability.”

“Redistricting stems from the concept of political equality,” said Marilyn Go, who was also appointed by Speaker Adams, as she voted for the proposal. “The districting commission has tried to pursue this road to political equality by making it a more open process. We've tried to be upfront with each other. We've been open to hear comments from the public. But to paraphrase Abe Lincoln, we can't please all of the people all the time with all of the lines.”

The Commission was charged with redrawing the city’s 51 Council districts to accommodate an increase in the city’s population by 630,000 residents reflected in the 2020 Census. The body had to follow strict guidelines set by the U.S. Constitution, the Voting Rights Act of 1965, state law, and the New York City Charter. Commissioners are appointed by the Mayor (7), Council Speaker (5), and Council Minority Leader (3).

Commissioner Marc Wurzel, who was appointed by City Council Republican Minority Leader Joe Borelli, pointed to those restrictions as he explained his vote. “It is not perfect, it's far from perfect, but I am satisfied with the work product and I'm happy to lend my name to it,” he said of the approved proposal.

In particular, Wurzel and others have criticized a recent state law change that reduced the allowed population deviation between the most and least populated districts from 10% to just 5%. “If people are upset, don't direct your ire at us,” he said. “Look at the governor and look at the Legislature who adopted a poorly worded law in October that severely limited this Commission's ability to keep as many communities of interest together.”

Asian Americans were the largest growing population in the Census and the new map creates a new “Asian American opportunity district” in Brooklyn, bringing the number of minority opportunity districts in the city to 29. Previously, that new district had been carved in a way that separated historically Latino communities in Sunset Park and Red Hook, and would also likely pit Democratic Council Members Alexa Avilés and Justin Brannan against each other by combining their bases into the new district. But the latest map undid those lines and maintained both Avilés’ and Brannan’s bases while increasing the possibility of Asian American representation.

The map also reunited other neighborhoods that had been divided among several Council districts. That includes Hell’s Kitchen in Manhattan, which had been split into three districts in the Commission’s preliminary July proposal. And it also reversed the drawing of a district on the East Side of Manhattan that extended into Queens, maintaining the district’s lines in Manhattan alone.

Among the most contentious issues in the initial map was the proposal to keep the three Council districts on Staten Island intact at virtually the largest allowable undercount population deviation, which had a domino effect across other boroughs that had to then fit the city’s population increase. But the latest map, just like the one that was voted down in September, extends Staten Island’s Mid-Island District 50 into parts of South Brooklyn with a few changes.

Schnall, the sole vote against the proposal, cited that as the basis for his objection. “There are no other reasons why I oppose these maps,” he said.

The new lines could help strengthen Republican representation in the Council, where they currently hold five seats out of 51. In South Brooklyn, in particular, Democratic Council Member Ari Kagan stands to see his district gain thousands more Republican voters, putting him in a precarious position as he heads into reelection next year.

Murad Awawdeh, executive director of New York Immigration Coalition (NYIC), an immigrant advocacy group, expressed support for some of the “positive changes” made by the latest map and the transparency through which they were enacted. But, he said in a statement, “it’s clear that more work needs to be done.” He said the city should heed calls for representation by the growing South Asian and Indo-Caribbean communities in  Southeast Queens. “To accomplish this, the city should consider a Charter Review Commission to potentially create more council districts, so that all groups can get fair representation,” he said. And he said the commission failed to create a new majority minority district in the Northwest Bronx, where there has been a significant increase of Latino New Yorkers since the last Census.

The map will now head to the City Council, which has the option of approving it and bringing the redistricting process to a conclusion. The Council could also choose to reject the map and return it to the Commission with suggested changes. The Commission would then hold another round of public hearings before having the final say on the map that will be in place for the next ten years.

The deadline for the final map is December 7. It will then dictate the political lines for City Council elections in 2023 for all 51 seats, with party primaries in June of next year, and the governmental lines as of January 1, 2024.

The new maps were created after a months-long process that involved an initial proposal released in July, the revised proposal from September, and now the latest map approved Thursday. The commission received more than 9,600 submissions from the public, involved more than 35 hours of public hearings, and 77 hours of actual drawing of the maps.

Citizens Union, a good government group that has been closely monitoring the redistricting process, applauded the Commission for finalizing the map in public hearings and celebrated the level of public input that went into the process.

“Since the Commission released their first draft of City Council district maps in July, thousands of New Yorkers have offered feedback on the proposed district lines. This is a testament to how important this process is to the future of our local democracy,” said CU Executive Director Betsy Gotbaum, in a statement. “It is imperative that the public remain engaged in this process. The City Council must expeditiously review these maps and submit its response. They should be free to do so without outside interference.”

At Thursday’s hearing, the Commission’s executive director, Dr. John Flateau, only outlined “modest changes” that were made to the previous proposal. Dr. Lisa Handley, a national expert on Racial Bloc Voting Analysis retained by the commission, noted that the new map “doesn't make many changes to the districts with significant minority populations.”

There was a last-minute attempt to make a technical amendment to the proposal from Joshua Schneps, a mayoral appointee. Schneps pushed for consolidating into the new District 47 the Warbasse Houses, an affordable Mitchell-Lama co-op in Coney Island, which are split between the new Districts 47 and 48. Despite significant discussion of the proposal, it was rejected, with only five members voting in favor, eight voting against, one member abstaining and one absent. That change could still be incorporated into the final map if the Council rejects this version and the Commission gets another shot at changes.