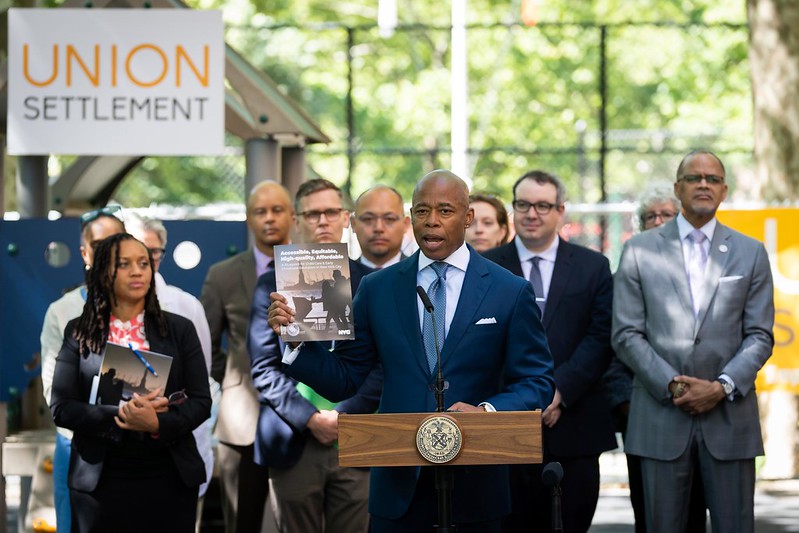 As he gets ready to deliver his second State of the City speech this week, Mayor Eric Adams has yet to launch the ‘MyCity’ universal online portal for city services that he ran on and announced his intention to implement at his first address in April of last year.

Adams campaigned for City Hall on a plan that included ‘MyCity’ as a centerpiece: a centralized resource for New Yorkers to access services and benefits such as food stamps, unemployment insurance, rental assistance, business permit applications, licenses, and more. As Adams and others have acknowledged, it is a major technological lift given how diffuse the various programs, platforms, and processes currently are.

In his first State of the City speech last year, Adams said the portal would initially focus on subsidized child care applications offered by the city before expanding to the broader suite of city services. “We know that working parents don’t have time to navigate complex bureaucracy to get their children care, and we are going to make sure that city government works for them,” he said in the speech.

In July, an official with the Mayor’s Office of Technology and Innovation (OTI), which is overseeing the development of the portal, told Gotham Gazette that they aimed to launch MyCity by late 2022. The official said that the portal was being developed in-house, a move that was praised by civic technologists. But, as the Staten Island Advance reported, OTI has since contracted the development to outside technology companies. In November, an OTI spokesperson told City & State that they were still expecting to roll it out before the year ended.

Earlier this month, when asked for an update on the portal’s progress, OTI spokesperson Ray Legendre referred Gotham Gazette to the agency’s 2022 Strategic Plan published in October. The plan merely lays out what has already been reported about the platform, that it will “enable a single, service-driven, mobile-friendly internet portal for all City services and benefits” integrated with existing websites such as 311 and nyc.gov. Responding to a follow-up inquiry about a project timeline, Legendre referred to the mayor’s comments in recent interviews.

“We’ll have more to share in the coming weeks,” Legendre said by email.

As the self-imposed deadline of the end of 2022 passed, Mayor Adams spoke of the importance of MyCity in interviews as he entered his second year in office.

“One of the top things I want to do is something called MyCity Card,” Adams said in a January 9 interview on WBLS 107.5 FM, previewing his administration’s plans for the year ahead. “It’s one card that all New Yorkers can get the resources that they deserve so they'll know what's available to them. It's using technology. That's what this year's about, using technology to improve the quality of life of New Yorkers and continue to address the public safety issue.”

In a December interview with the New York Times, as he looked back at his first year, Adams admitted that technology and the MyCity portal were areas where he faced a learning curve. He said the portal would launch early this year. In a Wednesday, January 25 interview on 1010 WINS, he reiterated commitment to using technology to improve how the city government functions. "I'm a big believer that we have underutilized technology to run our city more efficiently," he said.

"The MyCity card is going to be allowing New Yorkers to know all the resources that are available to them and take away the burden and the bureaucracy of navigating government. That's a huge advantage, and we're going to build on that," he added.

“It’s a huge disappointment that Mayor Adams stepped into this administration with really big ideas on improving digital services but the infrastructure to build those services have not received adequate support, resources or staff,” said Noel Hidalgo, executive director of BetaNYC, a civic technology group. He noted that key positions at OTI have not been filled and that the city’s attrition crisis hasn’t spared the agency. “Good people have left. We’re in a worse place than when we started,” he said.

Hidalgo was also among those who were encouraged when OTI was creating MyCity with internal resources, which would have built up the city’s own technological capacity. Instead, the city is again relying on outside vendors, an approach that has proved disastrous in the past.

What does he expect when the platform finally launches? “My expectation is disappointment,” he said.