PHOTO OF THE WEEK: Governor Cuomo gives his State of the State address, via the governor's office 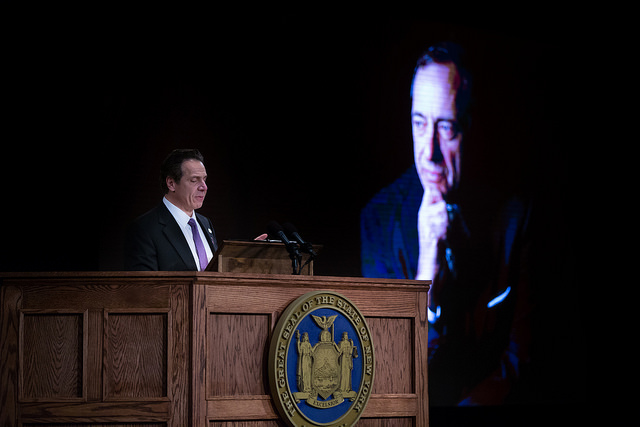 1. State of the State: Governor Andrew Cuomo delivered his combined State of the State and budget address on Wednesday. The plan has major infrastructure components to it as well as efforts to achieve social and economic justice, as the governor put it. Some of Cuomo’s 2016 “Built to Lead” agenda will place new financial strains on New York City, as the plan would end the state’s payment of some of the city’s Medicaid costs and change how CUNY is funded. Those changes and others are expected by some experts to cost the city $1 billion starting in the next fiscal year. In response, Mayor de Blasio has called the budget proposal “debilitating,” and said he would use “any means necessary” to restore the millions in state financing. Cuomo appeared to strike a conciliatory tone on Thursday, saying the city and state would work together to find Medicaid and CUNY efficiencies. [Read: Cuomo Outlines $144 Billion Budget & Cuomo Unveils Ethics Plan to Questions Of Follow Through]

2. Cuomo Cleared: On Monday, the office of U.S. Attorney Preet Bharara announced there was not enough evidence to prove a federal crime in the investigation into Governor Cuomo’s interference with and closure of the Moreland Commission to Investigate Public Corruption.

3. Gun Courts: On Tuesday, Mayor de Blasio announced “Project Fast Track,” which aims to reduce gun violence in New York City through the creation of a new Gun Violence Suppression Division in the NYPD and by designating judges to fast-track illegal gun cases and resolve the cases within six months. [Read: City to Open Gun Courts to Expedite Prosecutions]

4. Spotlight on Sexual Assault: The alleged gang-rape in a Brownsville playground last Thursday, the rise in the number of reported rapes in 2015, and NYPD Commissioner Bratton’s suggestion that women going home late at night use the “buddy system” have led sexual assault to become the focus of public discussion this week. On Monday, lawmakers and advocates rallied outside City Hall to call for more legislation and resources to protect women from sexual assault. [Read: To Combat Increase in Reported Rapes, Experts Point to Prevention & Sexual Assault Becomes Focus of Public Discussion]

5. 421-a, Uber, Carriage Horses: Negotiations between construction unions and real estate developers to extend the controversial 421-a development tax break are at a standstill, with both sides certain they will not reach an agreement by the Friday deadline to renew the program. Meanwhile, the city releases its long-awaited study of the for-hire vehicle industry, leading to little other than acknowledgement that the city is unlikely to pursue a cap to Uber’s growth. And, a deal on reducing horse carriages appeals imminent. [Read: Negotiations to Extend Important Affordable Housing Tax Break Said to Reach Impasse]

It was a good week for Governor Andrew Cuomo, after he was cleared by U.S. Attorney Preet Bharara’s office in the investigation into his interference with the shutdown of the Moreland Commission to Investigate Public Corruption.

It was a bad week for Police Commissioner Bill Bratton, who came under fire for suggesting women should use the “buddy system” when coming home late at night to avoid becoming the victim of sexual assault. The NYPD has also been criticized this week for not notifying the public of the alleged gang rape in a Brownsville playground sooner.

Around this time 27 years ago, on January 13, 1989, subway gunman Bernhard Goetz was sentenced to a year in prison for possessing an unlicensed gun which he used to shoot four people he said were going to rob him.

Around this time 116 years ago, on January 10, 1900, bids went out for the construction of an underground railroad line running between City Hall and the Bronx. The city’s first subway opened four years later.

To Combat Increase in Reported Rapes, Experts Point to Prevention, by Meg O'Connor

Cuomo Unveils Ethics Plan to Questions of Follow Through, by David Howard King

Cuomo Heads Into State of the State After Big Announcements, With More to Say, by Ben Max

Council to Assess Hunger Problem, City Efforts to Reduce It, by Ryan Brady

New York One Signature Away from Calling for Overturn of Citizens United, by Samar Khurshid

A Case for None-Time-Limited Supportive Housing for Young Adults, by Colleen Jackson (opinion)

More Cities Should Do What States and Federal Government Aren't on Minimum Wage, by JoEllen Chernow (opinion)

Governor Andrew Cuomo sat down with NY1's Errol Louis for an interview Wednesday after laying out his vision for the year in his State of the State address.

Human Resources Administration Commissioner Steven Banks discussed the ways the de Blasio administration is dealing with the homelessness crisis and the governor’s plans to audit the city’s shelter system with Errol Louis NY1.

Mary Brosnahan, executive director of Coalition for the Homeless, talks about the new proposals for addressing New York City's homeless population on the Brian Lehrer Show on WNYC.