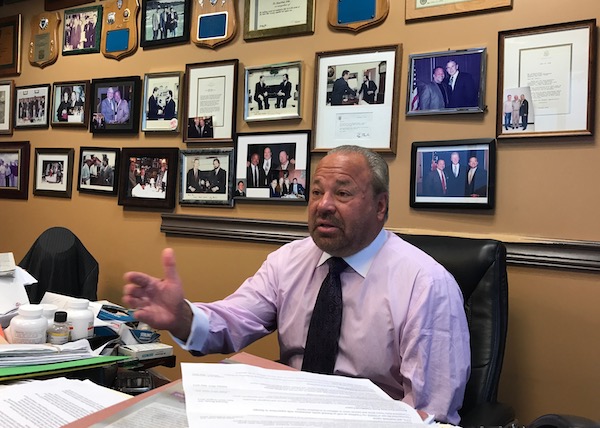 In his 50th floor corner office in Midtown, the characteristically brash private security CEO Bo Dietl made the case Monday morning for his outsider mayoral candidacy. Appearing on the Max & Murphy podcast, Dietl explained his brand, his political evolution from Republican to Democrat, and his independent candidacy for the city’s top job.

A former NYPD detective who gained celebrity status and became a Fox News personality, Dietl is always ready to talk. “Everybody knows Bo Dietl, I have a brand, I’m recognizable,” he said.

Part of the brand is a palpable disgust for politicians and the political system in the city, especially “Big Bird” – how he often refers to Mayor Bill de Blasio, who is taller than average – saying “everyone’s afraid of de Blasio because of the Democratic machine,” which he labeled as corrupt and beholden to special interests, especially labor unions.

“All the mayor is good for is citing statistics,” he said, and accused de Blasio of not talking about how lately “murders are soaring” -- Dietl wants to see the data from the last 30 days, he said (New York’s homicide rate is 85% below its 1990 level and hit a near-record low last year). Despite the falling crime rates, Dietl said that people in the city were feeling increased fear, and “fear to me is a crime.”

He also had harsh words for the presumptive GOP nominee for mayor, State Assemblymember Nicole Malliotakis (listen to her Max & Murphy episode here), whom he called “that girl from Staten Island” when he wasn’t mispronouncing her Greek surname. “I don’t like that she voted against gay marriage. This is New York City,” said Dietl, referring to a 2011 vote that Malliotakis recently said she regrets. Dietl said Monday he is heading to Long Island the next two weekends to spend time with and raise money from Greek associates, including supermarket magnate John Catsimatidis, who ran for mayor in 2013 but decided against a run this year.

Dietl was particularly irked about his inability to participate in a primary or run on a major party ballot line. He’s been battling the Board of Elections (BOE) over a determination that he cannot run as a Democrat after trying to register both as a Democrat and as an independent. He has also tried and failed to get on the Republican line by obtaining a so-called Wilson-Pakula waiver, which allows a candidate to run if they obtain approval from three of five county committees.

“She’ll do worse than Lhota,” Dietl said of Malliotakis, referencing current MTA chair and 2013 GOP mayoral nominee Joe Lhota, who lost to de Blasio in a landslide, and faulted the state Republican Party for not giving him a fair chance, even after he was endorsed by the Queens County Republicans. He described receiving a call from Republican State Committee Chair Ed Cox asking him to support Malliotakis; according to Dietl, he told Cox off over the course of an hourlong conversation, during which he also offered to drop from the race completely were he to be granted the chance to face Malliotakis in the primary and lose.

When talking with Max & Murphy, Malliotakis had previously given little indication that Dietl was of concern to her, saying she wasn’t really sure what he was doing, other than “making noise.” Dietl replied on Twitter that he was indeed making a lot of noise, and also out-fundraising Malliotakis, which is true.

Corruption was a running theme for Dietl. “I guarantee you this corrupt BOE and this corrupt mayor will still try to keep me off the ballot,” he said about his issues with registration. He also described an incident – one that has not been verified – where an unnamed Brooklyn reverend came to Dietl and said he’d “deliver the black vote from Brooklyn, if [Dietl] put [him] on $15,000 a month as a consultant. I said ‘get out of my office!’”

Dietl’s persona and electoral pitch have invited comparisons to President Donald Trump, who Dietl said he has known for 40 years. Yet the insinuation isn’t welcomed by Dietl, who called the president “narcissist, big mouth Donald Trump,” while allowing that “he gets things done.”

He said he would make sure to work with both Trump and New York Governor Andrew Cuomo to act on his priorities for the city, which included floating a $5 billion state tax bond to reform the city’s public transportation system, obtaining federal money for anti-terror, and reimagining the city’s education system.

Asked if he knows enough about city government to have more success than Trump has had adjusting to running government, Dietl said "it's not rocket science" and explained, a la Trump, that he would hire the best people.

Listen to the whole podcast conversation with Dietl here.