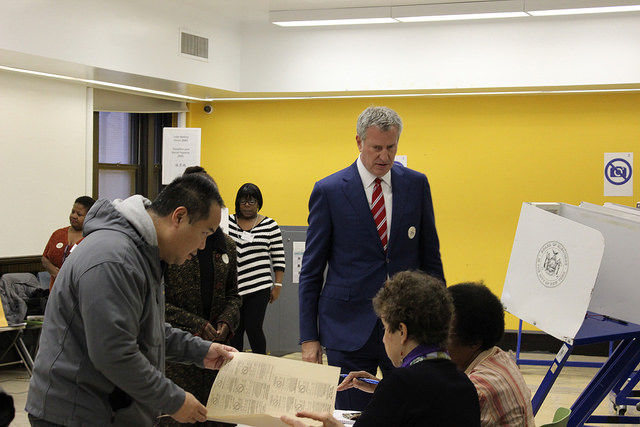 The New York Campaign Finance Board (CFB) held a hearing Monday morning to field testimony on the 2017 New York City election cycle from candidates, operatives, and advocates. The hearing, part of a quadrennial post-election report that must be submitted before September 1 the year after the election, came on the heels of final campaign finance filing of the 2017 cycle. The CFB post-election process will lead to a report that then informs legislation typically introduced by City Council members to tweak the city’s heralded public-matching system that encourages small-dollar fundraising.

Led by CFB chair Frederick Schaffer, Monday morning’s meeting was attended by roughly 35 people and lasted just under two hours. It featured discussion on increasing voter participation, ins and outs of campaign financing, and CFB protocols in working with candidates. As is typical, several candidates who were unsuccessful in the recently completed elections expressed frustration with the process, though the vast majority of candidates did not testify at the hearing. City Council Member Ben Kallos was the lone elected official to testify -- Kallos has been a campaign finance and government reform advocate prior to joining the Council, and for the last four-year cycle chaired the Council committee with oversight of the CFB.

The board took stock of its initiatives during the last cycle -- which featured elections for citywide, borough-wide, and City Council seats -- including the matching funds program, but also the candidate debates that it sponsored, and its other voter education and outreach efforts.

According to the CFB’s data, during the 2017 cycle 73% of candidates received money from the program; the CFB distributed funds totaling $17,694,046 to 105 different people running for office. This past cycle, 46% of spending came via public funds. And in 25 Council races, matching funds comprised of over half of campaign spending.

The first and only of its kind, the hearing is part of a process that may prove pivotal in the next election cycle, ahead of what will be a far more contentious and busy 2021 elections. After the CFB released its report on the 2013 elections in 2014, the City Council subsequently incorporated many of the proposals in about a dozen pieces of legislation that passed ahead of these past elections, along with about another ten campaign finance-related bills brought forth by Council members to modify the system and related processes to their liking.

According to the CFB, of 14 statutory changes the board recommended in 2014, 10 became law, including measures to make determinations about public matching funds earlier in the cycle, clarify eligibilty for debates in the citywide races, and ban anonymous campaign communications. Those that were not enacted into law include instant runoff voting.

On Monday, advocates and others testifying offered several changes they would like to see ahead of the 2021 election. Further encouraging candidates to raise funds via small-dollar donations topped the list of priorities.

Kallos made the case for a bill he sponsored last term and will soon re-introduce this term, which he said would additionally incentivize candidates to pursue small-dollar donations by increasing the threshold for public matching dollars that candidates can earn.  While he called New York City’s “the model public finance system in the country,” he said it can also be improved upon.

Under current campaign finance law, Kallos explained, the CFB matches the first $175 of eligible donations at a six-to-one ratio. Kallos wants to raise the ceiling for matching funds so that candidates can run for office by raising all donations of $175 or less if they so choose, and still be able to hit the spending cap. If his policy in enacted, Kallos said candidates would be able to finance campaigns on mostly small donations. For example, he said, someone would be able to run for mayor collecting 5,689 contributions of $175, raising about $1 million, to be matched six-to-one, garnering a total of $7 million and able “to run a competitive race.”

“The ability to run a 100 percent grassroots campaign, where a candidate is beholden to no one except the voters, will revolutionize city politics and restore confidence in government [that] has been steadily eroding for decades,” he said.

“If candidates pursue a small-dollars, grassroots campaign, we will have elected officials who earned their positions based on their knowledge of the issues,” he said, rather than candidates’ “ability to convince millionaires and billionaires to open their wallets.”

Michael Malbin, campaign finance expert and politics professor at the University of Albany, agreed with the thinking behind Kallos’ bill. “If you raise your money from max donors...you’re not going into the neighborhoods to get $50 contributions,” Malbin said during his testimony. “And the goal of this is, or ought to be, to increase participation by a diverse set of people who fully represent the city.”

Caitlin Scherer, of Represent.US, voiced support for Kallos’ legislation. And more broadly, Scherer made the case for increasing the amount of public spending on elections. “Doing so would involve more citizens in the political process and relieve candidates of the pressure to solicit donations from those with the deepest pockets,” she said during testimony.

Reinvent Albany senior policy consultant Alex Camarda also expressed support for Kallos’ legislation. The bill was co-sponsored last term by Council members Brad Lander and Fernando Cabrera, along with 29 others, for a total of 32 sponsors in the 51-seat body, and was discussed at a hearing last April, but did not see a committee vote.

Rachel Bloom, director of public policy at Citizens Union, another government reform group, offered other suggestions on campaign finance reform during her testimony. Before the 2021 elections, Bloom said Citizens Union wants to see “an increase in spending caps to counteract increases in independent expenditures, banning the use of public funds for campaign consulting services from firms that also lobby; and a further reduction in public funds for candidates facing minimal opposition and the enactment of ‘war chest’ restrictions.’”

Bloom also assessed the voter turnout in the 2017 elections, which was exceedingly low. She pointed toward the lack of competitiveness in many elections across the five boroughs, with incumbents receiving 74% of the vote and only about 10 of more than 50 municipal seats open in 2017 as the factors driving low voter participation. The elections last year, she said, were “notably uncompetitive.” Bloom added that “open” city council races, races without incumbents seeking office, were 12% more likely to participate in the matching funds program.

Matt McDermott, director at Whitman Insight Strategies, mentioned the difficulty of getting younger voters to the polls. “These voters aren’t apathetic. They actually have issues they care about and they actually care about those passionately,” McDermott said. “The difficulty is in correlating those care-abouts to voting in local elections.”

“A lot of younger people just don’t know there’s a primary,” said Caileigh Scott of McEvoy & Associates. “It is partially a communication breakdown.”

Malbin said that though getting millennials to vote it a difficult task, it is also crucial.  “The research show that once you get somebody to vote, it’s really a habit. The first couple are the hard ones,” said Malbin.

While the majority of testimony was focused on specific recommended changes to the CFB system, some who testified -- mainly those who either worked on unsuccessful campaigns or had run themselves -- had harsh words for the CFB.

Angela Disto, who served as treasurer for Liam McCabe’s unsuccessful bid for the Republican nomination in City Council District 43, complained that some of the CFB’s verification process of donations was “petty” and “unnecessary.”

“I’m a volunteer, as [are] the majority of campaign treasurers. Who needs it?” she said. “Why does the board make this mostly volunteer role so overwhelming?”

Anthony Rivers, who ran unsuccessfully in City Council District 27, does not think the CFB-led training sessions adequately prepared him for the campaign.

“I feel the training does not put enough emphasis on campaign contribution cards and their importance,” he said. “It should be heavily stressed on the importance of not having a single blemish on the contributions card. Our campaign suffered many setbacks due to minor blemishes on the individual cards.”

For his part, Cary Goodman, who ran in Council District 6, had a different experience with the CFB. “I am here as a poster boy for the Campaign Finance Board,” he said. “There is absolutely no way I would have been able to conduct a campaign against the incumbent -- it was not successful, I got rocked -- but I would not have have [had] the opportunity to do what I did without the Campaign Finance Board.”