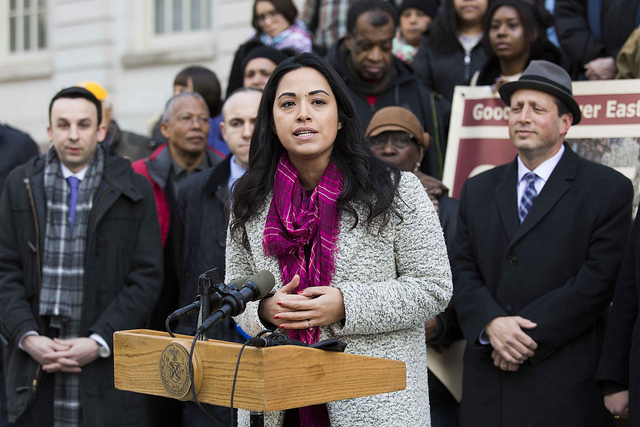 The New York City Council’s Women’s Caucus, comprised of the 11 women in the 51-member legislative body, will soon have additional support for its legislative and programmatic agenda with new funding for a full-time paid staff person added to the Council’s operating budget for the next fiscal year.

The Council’s finance committee voted last week to approve a $17.3 million increase in the Council’s own budget, which it can insert into Mayor Bill de Blasio’s yet-to-be-released executive budget, due in the next few months. That budget uptick includes additional funding, provided through Council Speaker Corey Johnson’s office, for the Women’s Caucus and the Progressive Caucus to each hire a full-time staffer. The Progressive Caucus, now 21 members, has so far pooled resources to pay for a full-time staffer while the Women’s Caucus has had to depend on individual Council members’ staff. The only caucus that has had a full-time staff person paid for by the Council has been the Black, Latino and Asian Caucus.

“We secured a commitment from [Johnson] so it is a campaign promise fulfilled,” said Council Member Carlina Rivera, who is co-chair of the Women’s Caucus along with Council Member Margaret Chin, referring to pledges made by Johnson before he was elected speaker. The caucus, then under the leadership of Council Members Helen Rosenthal and Laurie Cumbo, met and interviewed all eight candidates who were running to lead the Council, and extracted several promises from each, including funding for a new staff position to serve the caucus.

“As he was running for speaker, he told the Women’s Caucus that this is something he would do, recognizing our number, of course, that we comprise over 50 percent of the population,” said Rivera, whose Manhattan district borders Johnson’s and Chin’s. “So what we’re hoping to do with a full-time person is really to push forward our agenda, which is comprehensive.”

As Rivera alluded, the Council comprises an abysmally low number of women members -- the 11 is down from 18 in 2009. There is an effort -- 21 in '21 -- underway being spearheaded by former Speaker Melissa Mark-Viverito and others to see a wave of women elected to the Council through the next city elections, in 2021. None of the eight main speaker candidates for this term were women (though Council Member Inez Barron did cast a protest vote for herself the day the Council voted for speaker, and that too because of the lack of people of color in leadership positions in the city.) Since before the last election cycle, there have been increasing calls for improving women’s representation across city government and to add women’s voices to important policy decisions.

“Every issue is a women’s issue,” Rivera emphasized, “but specifically, we really want to focus on a couple of things. We want to address the issues of underrepresentation of women in elected office, of course, but not just in elected office, corporate boards, local and state commissions.

“We want to be sure that we have the data to just really identify where these gaps are and to make sure that we are giving women opportunity at every level of government but also in the private sector,” she said, indicating some of the work that the caucus’ new staff member may be tasked with.

The new funding is slated for the next fiscal year, beginning July 1, giving the Women’s Caucus just over three months to go through the hiring process. The position is expected to be posted publicly and every member of the caucus will have a voice in choosing the new staffer.

Rivera laid out a long list of policy priorities for the caucus that is likely to keep it busy in this four-year legislative session. Among them: pay equity, ending sexual harassment in the workplace, equal access to quality education, health care for incarcerated women, adult literacy. The Women’s Caucus will host a series of workshops on salary negotiations, Rivera said, and also push strongly on a package of anti-sexual harassment legislation recently introduced at the Council.

Rivera said she’s focused on “making sure that women have full access and they feel like whether its in education, the workplace, or just civic life, the opportunity is there.”

“In the past the Women’s Caucus has put forward some amazing initiatives and pieces of legislation, whether its paid family leave, whether its access to feminine hygiene products in our public spaces -- that is something that we want to continue to build on,” she said.

The new staffer will also liaise with the Council’s other caucuses, certain members of which overlap, and with partners in state and federal government and advocates on the ground. “What I’m hoping to do is be a little bit more collaborative than historically within the caucuses so there’ll definitely be cross collaboration since we now have a full-time staffer for each of these caucuses,” Rivera said. “And I think they’ll benefit from working together and of course will increase our capacity.”

“I’m excited,” Rivera added. “I think that a woman having a seat at the table changes the dynamic and trajectory of important policy discussions. And I think if we had more women as representatives, we’d be better off as a city and as a nation. So I’m looking forward to it.”

Council Member Chin, in a statement to Gotham Gazette on Wednesday, thanked the speaker for following through on his promise to the Women's Caucus. "This year, we’re fighting to expand our agenda, build local relationships, and increase our visibility to ensure that the causes of women and girls never take a backseat. This will be a game-changer in moving that agenda forward," Chin said.

Note - this article has been updated to include a statement from Council Member Margaret Chin.