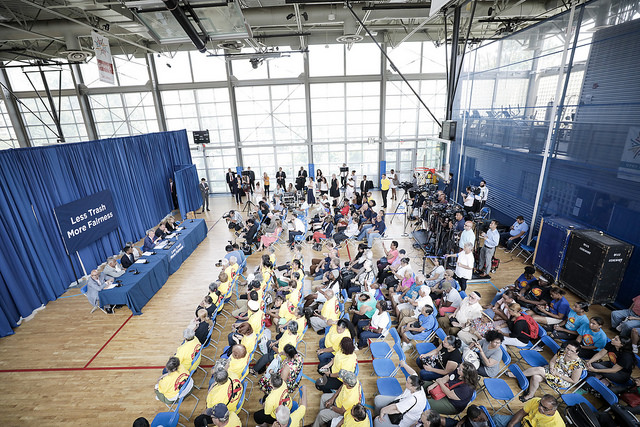 The sixth 2019 Charter Revision Commission “expert” hearing ended in more confusion than it began with on the decidedly complex topics of land use and city planning.

Over the course of more than three hours on Thursday evening, experts struggled to articulate a clear definition of comprehensive planning, leaving the commissioners feeling like they had little to work off moving forward in the process of examining the city charter and recommending changes to the city’s foundational governing structures and laws, even if they support the idea abstractly. Meanwhile, experts on the city’s Uniform Land Use Review Process (ULURP) put forth several different ideas about how much ULURP should involve the community, but mostly agreed that it already works well enough.

As with several of the other hearings, experts and commissioners agreed on the broad goal of working toward a more equitable, affordable, and livable city, but disagreed on the means to achieve it.

The charter revision commission is holding a series of expert hearings as it works toward the first potential significant overhaul of city governing since 1989, with four main focus areas to decide on a series of suggested reforms to put on the ballot before voters this November.

The commission has already held hearings on election reforms, police accountability, city budgeting and contracting, conflicts of interest and chief diversity officers, and the public advocate and law department. The commission consists of 15 members appointed by each borough president, the city council speaker, the comptroller, and the mayor, and there is staff to help with research and more.

Uniform Land Use Review Process
“Would you agree that how land is used in any particular place is always a political act?” Commission Chair Gail Benjamin asked the question of the hour, jumpstarting a ULURP panel with commissioners concerned about displacement and equity, and an expert panel that largely echoed those concerns but conceded few suggested reforms.

ULURP refers to the city’s “standards and timelines for certain land use actions” that stretch beyond the purview of the land’s zoning. Currently, ULURP is a monthslong process that moves from the Department of City Planning to community boards to borough presidents to the City Planning Commission to the City Council.

Experts were mixed on how to reform ULURP, or whether it even requires change. Marisa Lago, Director of New York City Department of Planning, cautioned against moving away from as-of-right housing development, or new housing that complies with existing zoning laws and does not require special approval, which she said provides much of New York City’s affordable housing. The ULURP process, Lago said, is also indispensable to supporting affordable housing and prioritizes community input.

Some experts emphasized the importance of a comprehensive, citywide perspective, rather than a hyperlocal view of city planning.

Anita Laremont, the executive director of the Department of City Planning, called for a timely, fully public process that balances community input with governmental power -- and indicated ULURP may give too strong a voice to louder local opposition to development. “While some local voices feel that the ULURP process does not give them a strong enough voice, we hear from affordable housing developers, fair housing advocates, and others who see that local concerns are frequently winning out over the wider needs of families, immigrants and others among the city’s most vulnerable.”

Andrew Lynn, who formerly held Laremont’s role and is currently a consultant, similarly warned against prioritizing “a vocal, local minority directly affected by an action whose interests may conflict with those of a larger, quieter citywide constituency that has a stake in the action.”

Joe Rose, former chair of the City Planning Commission and director of the Department of City Planning, espoused many of same the viewpoints as the other experts on the panel, but also recommended a process that adds 30 extra days to community boards’ decision time, which is currently 60 days, in particularly complex cases. Community Boards currently have an advisory role in ULURP. Rose further argued that giving the Department of City Planning a stronger enforcement role regarding zoning laws would alleviate unnecessary convolution in the ULURP process.

Vishaan Chakrabarti, an architect, urbanism professor of practice at Columbia University, and former planner for the city under Mayor Michael Bloomberg, was part of the experts’ consensus against significantly revising ULURP to bring in more considerations. “We are outpacing our growth projections,” he said. “But given our land scarcity, we simply can’t keep up unless we expand the production of both affordable and market-rate housing. The fantasy that less growth will lead to equity is irresponsible rhetoric.”

The only expert who spoke unequivocally in favor of ULURP reform was Carmen Vega-Rivera of Community Action for Safe Apartments, who spoke about her “extremely frustrating” experience with the Jerome Avenue rezoning in the South Bronx that was approved a year ago and she says invited private developers into the rezoned neighborhood and could potentially lead to gentrification and displacement.

Vega-Rivera called for an overhaul of the CEQR, or environmental review process, which she said failed to adequately assess the threat of displacement in the Jerome Avenue project. She suggested a public CEQR process that is renewed at least every five years and delivers a full explanation to the community of the Planning Department’s methodology. She also recommended revoking total mayoral control over the CEQR process and instead endorsed a special oversight commission of appointed experts. “In other words,” Vega-Rivera said, “no one has more power than the other.”

Commissioners were mostly concerned with maintaining equity and community oversight in the ULURP process. Commissioner Sal Albanese, former City Council member and three-time mayoral candidate, asked experts how the city can achieve a balance of continued growth and a vibrant working-class population, while Commissioner James Vacca, a former City Council member, asked why ULURP fails to engage community boards earlier in the process to avoid isolating local residents and stakeholders.

Vega-Rivera said community-based efforts are not occurring. “I happen to be a tenant fighting not to be displaced in my community,” she told the commissioners. “No one has knocked on my door to assess my situation.”

The other experts largely agreed with each other that New York City can only achieve equity with a comprehensive view of the city, arguing that a neighborhood-centric approach is myopic. Lago offered homeless shelters as an example: few neighborhoods want to host them, but they remain a critical service that have to exist throughout the city, she explained. At the same time, none of these experts endorsed an actual comprehensive plan for New York City.

Commissioner James Caras, the Land Use Director for the Manhattan Borough President’s Office, reupped his colleague’s question about engaging the community earlier. Laremont answered, “I’m a little bit confused because I’m not aware of a single instance when that has not been the case.” Even if the process has been informal, community members and stakeholders are consistently looped into the ULURP process, she said. When Caras asked why a community-centric process should not be codified if it’s already in place, Lago said that “one size doesn’t fit all,” and city planning groups need flexibility.

Other concerns from commissioners included the disparate planning entities in the city, which experts argued makes the process more robust; increasing digital access to ULURP applications, which Laremont assured; and adding urban planners to the City Planning Commission, which received mixed reviews.

Comprehensive Planning
New York City does not have a comprehensive city plan, unlike many other cities across the globe. Some are calling for the requirement to be added to the charter, whereby at some regular interval, the city would be responsible for developing such a plan for land use, development, and key aspects of city life.

In a document distributed prior to the hearing, the commission defined a comprehensive plan as “a document that articulates long-term development goals related to transportation, utilities, land use, recreation, housing, and other types of infrastructure and services.” But the first expert, Vicki Been, the former commissioner of the city’s Department of Housing Preservation and Development, began the panel by admitting, “I’m not sure that we’re all on the same page about what is meant by comprehensive planning.”

She called a charter mandate “empty platitudes without much more detail about what is meant by comprehensive planning,” and cautioned that its ratification could make an already lengthy and unpredictable process more onerous.

Other panelists who spoke against comprehensive planning cited its failure in the 1970s charter revision process, when by the time it was codified, it was almost immediately outdated, according to several experts. Urban planner Sandy Hornick called the idea “inherently top-down,” rather than community-based. Patrice Carroll of the Seattle Office of Planning and Community Development, where comprehensive planning is in place, said that Seattle’s plan allows for flexibility within a broader framework that precludes an overly top-down approach.

Commissioner Hirsh asked how the current system accounts for equity, again probing at the hearing’s lack of clear definitions. Been explained that citywide tension stems from a lack of a clear interpretation of fairness, and Hornick offered the example of waste stations to illustrate the argument that comprehensive planning will not remedy the problem that residents will fight against undesirable assets in their neighborhoods.

Commissioner Vacca strongly pushed against this notion, saying, “We’re not talking fairness or saturation, we’re talking inequality.” He cited the significant five-year gap in life expectancy between Manhattan and the Bronx due to issues like air quality. “These studies are not subjective, this is the reality. We already have this information at our fingertips and we don’t use it when we plan,” he said. “We plan in a vacuum.”

This sentiment was echoed most prominently by City Council Member Antonio Reynoso, who represents parts of Brooklyn and Queens, including Williamsburg, which has become essentially synonymous with gentrification and displacement. “Planning has left us an unaffordable, economically segregated, racially segregated city in a climate crisis,” he said, testifying before the commission in favor of comprehensive planning. “There has to be a better way.”

Commissioner Albanese expressed concern that comprehensive planning would stifle growth, but Angotti said that cities that use the system are growing, like Seattle and Amsterdam. Commission Chair Benjamin inquired about legislating comprehensive planning, rather than mandating it through the charter. Reynoso said that he did not trust his own body, the City Council, to handle the issue properly.

Nearly all commissioners agreed that they approved of a form of city planning that is community-based, equitable, and meets the challenges facing the city––from displacement to climate change––but seemed wary about the future of a comprehensive planning mandate without more concrete proposals.

[READ: New York City Doesn’t Have a Comprehensive Plan; Does It Need One?]