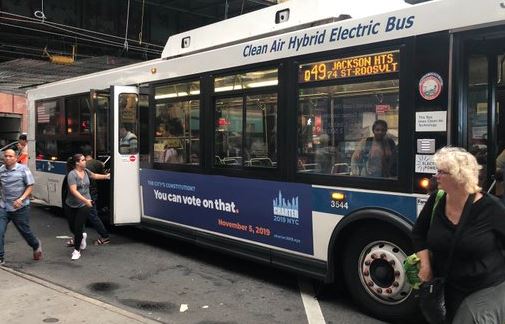 Just seven people trickled in from the rain to attend the information session in the Lower Gallery of the Bronx Museum of the Arts last Wednesday night. Despite the low turnout, the small group has the potential to reach dozens or even hundreds more people because most of those who attended represented organizations. They had come to the museum that night to gather information to bring back to their members about the proposals that will be on this year’s ballot, whereby voters will approve or disapprove 19 changes to New York City governance and elections.

The event was part of the outreach strategy of the 2019 New York City Charter Revision Commission, which has held an information session in each borough to educate the public on the five ballot questions -- containing the 19 suggested city charter amendments -- that are about to go before voters across the five boroughs.

The commission was created through City Council legislation to explore the charter and propose amendments for New Yorkers to approve or reject, and its work is now coming to fruition -- early voting begins Saturday, October 26, and runs through Sunday, November 3; Election Day is Tuesday, November 5.

In the end, the commission put forth various proposals that amount to significant changes, though not an upheaval of how city government works. But for the amount of change contained in the five ballot questions and the granular detail of each one, the commission faces an uphill battle to get the word out, and its partners in city government are not doing much to help. Meanwhile, the commission did its work during the one year of the four-year election cycle with the fewest political races on the ballot to help drum up interest and participation.

“I wanted to come because I had heard about some of the prior sessions but have not had the opportunity to come to one,” said Kerry McLean of Women’s Housing and Economic Development Corporation, who had braved the weather to find out how the amendments could impact her constituents.

The Bronx outreach session came after others in Staten Island, Brooklyn, and Queens, and just before the Manhattan session the next night. An initial round of info sessions in each borough took place in September. (There were a series of other open meetings and public hearings leading up to the commission issuing its proposals that also offered the public opportunities to learn about the process and participate in it. The commission received hundreds of recommendations from civic leaders, good government groups, and everyday New Yorkers, eventually winnowing them down to the 19 in five categories, from elections to police oversight to city budget, and others.)

On Wednesday night, the Charter Revision Commission’s staff gave an initial overview of the scope of the commission’s work and how it functioned.

There was a bit of an echo in the room where the four commission staff, in commission-branded t-shirts, spoke and answered questions. Tables were set up along the walls on either side of the room, each dedicated to a different ballot question, where the seven members of the audience would stop and listen or ask questions. Rows of empty foldable chairs stood between the tables.

Following the opening remarks, the group began the more intimate discussion of each ballot question where they took advantage of the opportunity to probe for more details.

The Charter Revision Commission is now in the final weeks of outreach to inform voters about what they will see on the ballot and the implications of each proposal. The proposed amendments deal with a wider range of issues than charter commissions in recent decades. They fall into five categories, each with its own ballot question: elections, Civilian Complaint Review Board, ethics and governance, city budget, and land use.

The question getting the most public attention is number one, which would institute ranked-choice voting for party primary and special elections. The change would allow voters to select candidates on the ballot by preference rather than choosing just one and is backed by a coalition of advocates. It would eliminate run-off elections and is intended to ensure more inclusive, positive campaigning where winners of crowded races are chosen with a wide base of support.

Perhaps the most controversial proposal is one that would give the Civilian Complaint Review Board the ability to prosecute officers who lie under investigation, which is one of the planks under Question 2. That provision initially failed during a vote of the Charter Revision Commission, but was later approved after some commissioners sought a revote. Along with four other pieces, approval of Question 2 would strengthen the CCRB’s oversight of the NYPD and alter its structure slightly. While many police reformers want to see it passed, the largest police officers union is mounting a campaign to defeat it.

Other significant pieces of Questions 3, 4, and 5 include extending the prohibition on former government officials lobbying city government from one year to two years; creating independent budgeting for the public advocate and borough presidents; a significant step toward the city being able to create a “rainy day fund” for budget savings; and giving more notice to community boards getting about land-use applications.

The commission was created by the City Council in partnership with Manhattan Borough President Gale Brewer and then-Public Advocate Letitia James. Appointees came from Council Speaker Corey Johnson, Mayor Bill de Blasio, as well as James, Comptroller Scott Stringer, and the five borough presidents. No single office held a majority of the appointments, but Johnson selected the chair.

According to representatives, the commission has reached approximately 1,500 people at in-person info sessions, panels, and fairs and has shared its educational materials with over 3,000 civic and community groups throughout the city. There are roughly 5.2 million active registered voters across the city, a very small percentage of which are expected to turn out this fall.

“A major strategy of the outreach team has been to try to reach as many leaders as possible because we can only do so much with our small team,” said Marissa Solomon, a spokesperson for the Charter Revision Commission, in an interview with Gotham Gazette.

Commissioners and the Charter Revision Commission’s staff have presented at meetings of community boards, political clubs, and unions; civic groups like the Association for Better New York and the League of Women Voters; professional networks like the New York City Bar Association; at public libraries and in college classrooms. They have done radio, television, and podcast appearances. Subway and bus ads are running in English, Spanish, Bengali, Korean, and Traditional Chinese, according to Solomon.

Despite its efforts, the public likely remains uninformed about the content of the ballot proposals and even what role an appointed commission plays within the branches and auspices of city government. Several attendees at Wednesday night’s info session came into the meeting with the belief that the city’s Charter Revision Commission was involved in state efforts to deal with public campaign financing and fusion voting, which are being addressed in a separate commission created by Governor Cuomo and the State Legislature.

According to Solomon, the commission had a budget of between $1 million and $1.4 million for the full ad campaign, which is comprised of television, radio, print, transit, and social media ads, including a commercial hosted by the stars of Comedy Central’s “Broad City.”

She said to get the word out about the five-borough information sessions, the commission advertised on social media and sent information to news bulletins like the ones published by City & State, NY1, Politico New York, and the Associated Press. The commission has just 1,118 Twitter followers.

The info sessions held last week are the last scheduled before voters go to the polls, but Solomon believes the number of individuals engaged “will grow exponentially as Election Day draws closer.” She says this will be done largely through additional speaking engagements being organized with specific groups where the demand for information or the potential for broad reach is high.

The city’s Campaign Finance Board has been leading its own parallel outreach through its civic engagement initiative, NYC Votes. Throughout the month the CFB has been conducting an email campaign dedicated to each ballot proposal in the lead-up to the early voting period beginning October 26, though it is not clear how many subscribers those e-blasts have.

Information on each proposal is also part of the CFB’s voter guide, which is mailed to voters and available on its website, including statements from advocates for and against each proposal. NYC Votes has rolled out a paid social media campaign about the new early voting format with ad placements on Instagram, Facebook, Twitter, and YouTube, and a video directing voters to its website where they can access the Voter Guide.

"This year’s election is an opportunity for New Yorkers to start their early voting habit now--before we vote for president in 2020, and for mayor in 2021. With five important questions on the ballot, there isn't a better time to take advantage of New York's new early voting law," said Eric Friedman, Assistant Executive Director for Public Affairs at the CFB, in a statement.

But outside of the Charter Revision Commission and the Campaign Finance Board, few if any other city entities appear to be reaching out to voters.

Mayor de Blasio’s relatively new DemocracyNYC initiative, headed by Chief Democracy Officer Ayirini Fonseca-Sabune, is geared toward civic engagement and has been more focused on educating the public on the early voting system, according to administration spokesperson Jose Bayona.

“We work to complement the outreach of other agencies, including those doing outreach on the ballot questions,” Bayona wrote in an email, without providing specifics other than saying that the office has been directing voters to the CFB’s NYC Votes website.

A representative of City Council Speaker Corey Johnson, who was instrumental in creating the charter commission, pointed to examples of tweets and a radio appearance in which Johnson directed voters to learn more about the proposed amendments.

“As a sponsor of the legislation that created this historic Charter Commission, Speaker Johnson has been vocal about urging New Yorkers to make their voices heard on our city’s constitution. The Speaker will continue educating the public about this opportunity through Election Day,” wrote the spokesperson.

Neither Johnson nor the larger Council that he heads nor other top elected officials appear to have made much, if any, effort to get the word out about the existence of the ballot measures, much less urging voters to turn out to approve or disapprove them.

The city Board of Elections has little on its website about the ballot questions other than a sample ballot that includes them, but there is nothing greeting visitors to the site that indicates all New York City voters will have the five questions to answer when turning up to the polls.

Vivian Carter, a Bronx-resident who attended Wednesday night’s info session, heard about it from City & State’s calendar of public events. “Well, I know about ranked-choice voting because there’s been a lot of discussion about it and, to be honest with you, I really haven’t seen too much in the media about what the four other proposals are,” she told Gotham Gazette.

“It’s just good to hear from these people that were involved and put this together. The fact that the Charter Revision Commission staff are here made me more interested in coming,” she added.