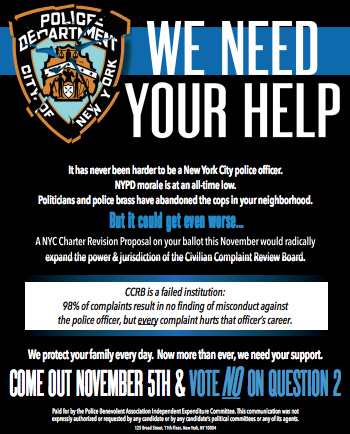 The city’s largest police union is spending significantly to defeat a ballot proposal that experts say will bolster the authority and performance of the civilian city agency tasked with investigating alleged misconduct and abuse of power by NYPD officers.

Voters are being presented five “yes” or “no” questions on the back of this fall’s ballot that propose 19 specific changes to the city charter. If approved by voters, Question 2 would enhance the operational capacity of the Civilian Complaint Review Board (CCRB), the oversight agency, and make some cases of lying to its investigators a form of police misconduct under its jurisdiction.

The Police Benevolent Association, which represents 24,000 rank-and-file NYPD officers, has been vociferously opposing that question and, as of Tuesday afternoon, had reported roughly $127,000 in independent expenditures on communications to defeat it on the ballot.

The communications contain messages describing the CCRB as biased against police officers and the ballot question as a power grab by the civilian agency. They contain images of protestors or the apparent aftermath of violent crime.

The text on one ad reads: “Political extremists and cop-haters have been attacking police officers in the streets for years. Now, they’re doing it at the ballot box.” In large letters in the margins are the words, “If you stay home, they win.”

It is unclear exactly where the PBA campaign funding is coming from. By city law, donations to independent expenditure committees focused on ballot referenda -- unlike IEs supporting candidates -- do not have to publicly disclose their contributors, according to a New York City Campaign Finance Board spokesperson. But the spokesperson said that state law does require such reporting, but no disclosures have been published on the state Board of Elections website, where they should appear if filed.

The proposed amendments on the ballot were developed by a charter revision commission with commissioners appointed by Mayor Bill de Blasio, the New York City Council, Comptroller Scott Stringer, then-Public Advocate Letitia James, and the five borough presidents. Its job was to explore the city charter and propose reforms directly to voters that could not be easily accomplished through the city’s usual lawmaking process.

In addition to Question 2 related to the CCRB, the questions include amendments in four other areas: elections, ethics and governance, budget, and land use.

In addition to the provision on police lying, which has surfaced as the most controversial proposal, CCRB officials and police reform advocates say Question 2 would help the civilian agency achieve its mandate to investigate, substantiate, and prosecute complaints of misconduct and abuse of power by police officers. The proposed amendment would give the CCRB a guaranteed baseline in annual budget negotiations and would allow its Board members to delegate subpoena power to the executive director. It would also expand the size of the Board and slightly alter who makes appointments to it. And it would codify an agreement between the NYPD and CCRB requiring the police commissioner to provide justification when rejecting a CCRB disciplinary recommendation.

Gotham Gazette first reported that the PBA launched a campaign imploring its members and allies to vote “no” on Question 2 last week.

City Council Members Joe Borelli and Bob Holden will hold a rally with PBA President Pat Lynch and other law enforcement union leaders on Staten Island Thursday to urge the public to vote “no” on Question 2.

Borelli, who is the Republican nominee for public advocate, recently told Gotham Gazette that while he opposes Question 2 and will be voting against it, he sees favorably the provision to bring suspected false police statements under CCRB jurisdiction.

“If that was a stand-alone bill I’d probably support that,” he said in an interview earlier this month. “Because what is the point of having a court if you can’t validate a statement people make while they are swearing...before it. That to me is not a problem.”

With its 24,000 members, the PBA campaign could be particularly impactful in what is expected to be a low turnout election. The digital ads appear to have first been posted on the website and on the PBA’s social media accounts last Monday, and posters have been reportedly up in precincts for the last month, according to the Daily News. It is unclear who the recipients of the mailers have been.

In response to the PBA ads, the CCRB published a fact sheet on its website aimed at dispelling what it called “myth” being promoted by the police officers union.

Each PBA ad includes a disclaimer noting it was paid for by the Police Benevolent Association Independent Expenditure Committee, which is not required on material promoting ballot referenda, according to a Campaign Finance Board official. Unlike independent expenditures for candidates, committees promoting a vote on ballot referenda are also not required to disclose contributors. In this case, the PBA has not reported any of its contributors.

By comparison, the only other independent expenditures reported to the Campaign Finance Board for this fall’s election were made by Committee for Ranked Choice Voting NYC, backed by a coalition of election reformers and elected officials who support a new voting method for some city elections, contained in Question 1. The group has spent roughly $447,000 in support of Question 1, and has disclosed the sources of approximately $83,000 in contributions.

No independent expenditures in support of Question 2 have been reported to the Campaign Finance Board. Voters can cast their ballots during the current early voting period through November 3, or on Election Day, November 5.

[READ: There are NYPD Oversight Measures on the Ballot - How Significant are They?]

Note: this article has been updated with additional information and clarification around city and state disclosure requirements for spending by IEs related to ballot referenda.