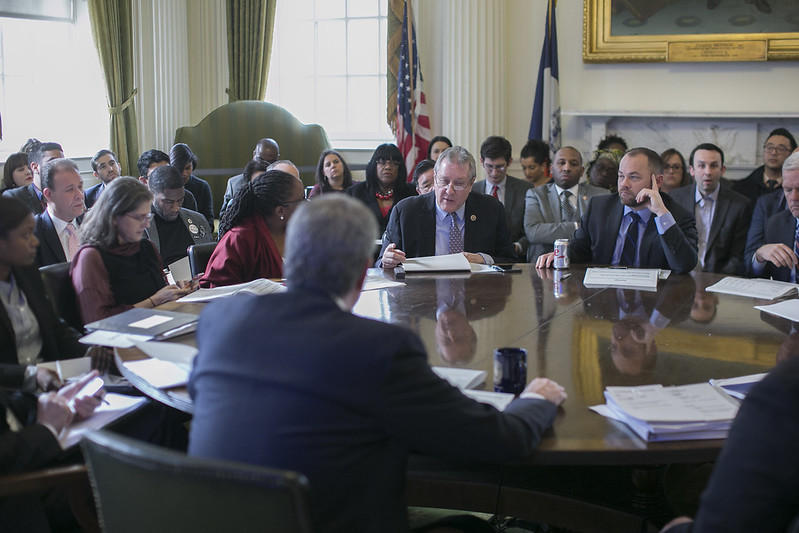 The New York City Council will on Monday begin its public examination of Mayor Bill de Blasio’s $95.3 billion preliminary budget proposal for the 2021 fiscal year, which begins July 1. As in previous budget cycles, the Council and budget watchdogs are pushing the mayor to find more savings in city operations and sock away more money for fiscal emergencies.

First with Monday’s overall discussion of de Blasio’s budget plans -- both the $95.3 billion annual operating budget and the $85.5 billion four-year capital commitment plan -- then weeks of committee hearings with testimony from city department heads, the Council will examine the mayor’s programs and spending. Council Finance Chair Danny Dromm will lead all the hearings, at first in partnership with Speaker Corey Johnson, then with committee chairs as the Council digs into the individual departments.

The mayor himself has been cautious in increasing planned spending for next year but the budget has nonetheless increased by more than $20 billion since he first took office, raising red flags about whether the city can maintain its largesse in the event of an economic recession that is, at this point, widely anticipated.

When the mayor released his budget proposal in January, spending was outlined to rise by $2.5 billion compared to last year’s adopted budget. Most of the increase stemmed from now-unavoidable costs – $1.6 billion from labor contracts and benefits, $256 million from state mandates on education spending, $270 million to pay debts on city borrowing, and $175 million to implement recent state-approved criminal justice reforms.

There was no funding for new initiatives, and the mayor attributed his fiscal restraint to uncertainty emanating from a $6.1 billion state budget gap that could potentially lead to Medicaid cost-shifts onto the city. (Since releasing his preliminary budget de Blasio has announced some initiatives that will cost money, like home visits for new parents, estimates for which may be outlined in coming Council budget hearings or when the mayor puts forth his executive budget plan in April.)

In his February budget testimony before the state Legislature in Albany, de Blasio said the cumulative effect of Medicaid cost-shifts, unfunded mandates, and reduction in expected aid to the city could be as much as $1.4 billion if Governor Andrew Cuomo’s proposed executive budget is approved. The Cuomo administration has disagreed with that projection but is nonetheless proposing major potential changes to the city’s financial picture.

As is the case every year, the Mayor’s Office of Management and Budget tends to be conservative in its revenue forecasts, and budgets accordingly – by November, when the budget is modified nearly half way through the fiscal year, more spending is added.

The City Council isn’t bound by those forecasts and has typically called for millions more in spending in every budget and has been largely successful in having its demands met. At the same time, for years now, the Council has called on the mayor to increase agency efficiencies to cut costs and to bolster reserve funds for a rainy day. This year promises to be no different.

"As we have done with previous budgets, the Council will fight for a responsible and fair city budget. We will continue to look for savings and push for reserves,” Council Speaker Johnson said, in a statement to Gotham Gazette. “We are also committed to securing a budget that works for all New Yorkers and includes our priorities such as sustainability, criminal justice, education, Fair Fares, transportation infrastructure, homelessness and affordable housing. Albany's budget gap has presented us with major challenges, but we will continue to advocate for all New York City residents by ensuring they don't lose critical services they depend on. The Council looks forward to working with the de Blasio Administration to achieve an equitable City budget.”

Johnson has already previewed that spending on homelessness will be among the Council’s budget priorities, whereby it is looking for increased city rental subsidies while reigning in other costs, something that has been an ongoing focus for budget watchdogs like Comptroller Scott Stringer, who is raising other repeated and new flags about de Blasio’s budget.

Stringer has also repeatedly beat the drum of fiscal discipline, pushing for a 15% “budget cushion” – the ratio of reserves to total operational spending. The cushion last year stood at about 11%. On Tuesday, Stringer presented his analysis of the preliminary budget, outlining his “agency watch list” and raising concern that the city is “spending more than we are taking in.”

Notably, Stringer added First Lady Chirlane McCray’s signature mental health initiative ThriveNYC to his watch list along with the city’s education, correction, and homelessness agencies, insisting that the program has been opaque about how its funding has been disbursed and has released few metrics to show it is working effectively. ThriveNYC is spending more than $200 million annually at this point on a variety of programs, often working in partnership with agencies like the NYPD and health department, but McCray and others have acknowledged its struggles with showing its successes through data.

Stringer pointed out that the city often spends more than is budgeted every year, and the increased spending is funded from expected surpluses before the end of the fiscal. Hence, the November budget modification. “One little warning sign is if we suddenly had a reversal of fortune, that would not leave us with much room to maneuver,” he said.

Unlike last year, the mayor did not institute a PEG (Program to Eliminate the Gap) which sets mandatory benchmarks for city agencies to identify savings that the mayor and his team then evaluate, but he did leave the option on the table. He has instead relied every year on a Citywide Savings Program, which asks agencies to find voluntary savings and efficiencies, but its results have been underwhelming to budget watchdogs. Stringer has been critical of the program, saying “we need a more rigorous review of agency spending. That’s how we will protect our most vulnerable communities. We simply have not done enough to root out inefficiencies, redundancies and waste. We have not done enough to prepare to weather a storm.”

Ana Champeny, director of city studies for Citizens Budget Commission, a nonprofit fiscal watchdog, echoed the concerns raised by Stringer and Johnson. “The Citywide Savings Programs, while they have been close to funding new needs, have continued to be small relative to city-funded spending, and they've also been particularly weak on efficiency savings,” she said in a phone interview. “While a third of the savings plan so far this year has been efficiency savings, that represents just 0.22% of city-funded spending. So in terms of the agencies really looking at their budgets and making reductions and improving efficiency and improving operations, we don't see enough of a focus on that.”

The administration has persistently touted a “historic” level of reserves, maintaining them at nearly $6 billion this year – $1 billion in the general fund, $250 million in the capital stabilization reserves, and $4.7 billion in the Retiree Health Benefits Trust fund.

But the CBC does not consider the RHBT fund a true reserve. “We feel that those deposits are being made against a very substantial liability on the city's books. And so we shouldn't be thinking of that as a pot of money which to use during a recession or some other contraction,” Champeny said.

There’s no doubt that economic growth is slowing. The city’s surplus revenue reduced from 2019 to 2020, which, as Stringer also pointed out, could be a worrying problem.

After the City Council concludes its month-long series of hearings on the preliminary budget, the Council will release its formal preliminary budget response and make clear its top priorities for budget negotiations, then the mayor will craft the next iteration of his spending plan, the executive budget, which will undergo another series of hearings, followed by both public and private jockeying before the final agreement is made behind closed doors. Amid all of it, the state budget is expected by its April 1 deadline for the new state fiscal year, results de Blasio will have to take into account in his executive budget plan released that month.

Note - This article has been updated to note that Champeny said efficiency savings represent 0.22% of city-funded spending, not 2.2%.