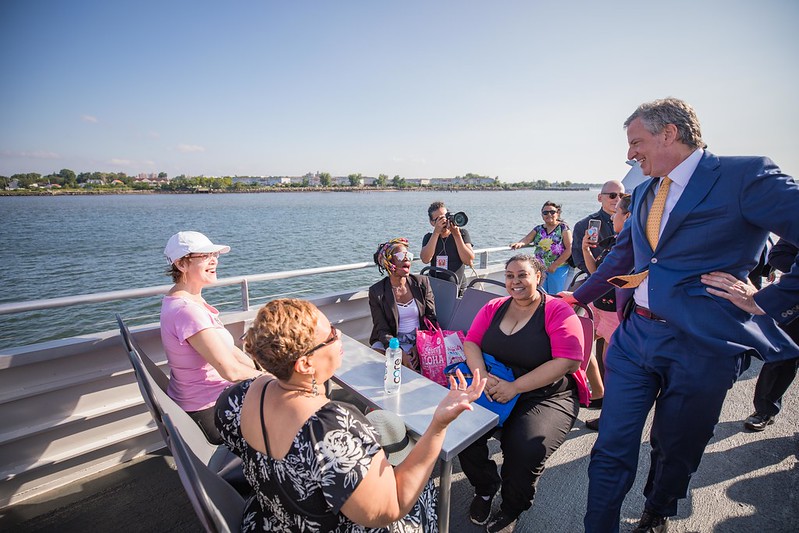 The coronavirus pandemic has led to plummeting ridership across the city’s various transit systems, posing an existential threat to the future of mass transit as the state and the city begin to cut costs and service. Among them, the New York City ferry, a signature initiative of Mayor Bill de Blasio, has seen far fewer commuters and a reduced schedule, but unlike a long list of other programs, the city does not plan to decrease its budget or scrap an expansion that is slated to take place this year and next year.

Since Governor Andrew Cuomo signed the “New York PAUSE” order on March 20, mandating that non-essential workers stay at home, the ferry has seen ridership fall by 90%, according to NYC Ferry data. From March 20-April 16, only 39,913 people rode the ferry, compared to 365,233 riders over the same time last year.

From March 23, the system began a reduced schedule, using its smallest boats, and its spring service has been cut by 37%.

Mayor de Blasio recently released his $89.3 billion executive budget, cutting proposed spending by $6 billion and tapping $4 billion in reserves to cover a shortfall in tax revenue caused by the coronavirus recession. The budget included billions in savings, including spending cuts and readjustments for lower-than-expected costs. Among those were cuts to bike lanes, lower spending on the Fair Fares program that provides half-priced MetroCards to low-income commuters. But the ferry system’s budget is not expected to change – it’s funded through the New York City Economic Development Corporation – and the fare is also expected to remain the same, according to EDC spokesperson Chris Singleton.

The rollout of NYC Ferry, as the city-run network is called, has not been without its controversies. When he launched it in May 2017, de Blasio touted it as a new mass transit alternative in a city where neglected subways and buses were struggling to efficiently transport millions of daily commuters.

But the ferry system, now with 21 stops, mostly on either side of the East River, has had a minimal impact, serving a relatively small slice of New Yorkers, and faced ongoing questions about its efficacy and financing. Despite being called a transit project, it was placed under the auspices of NYC EDC, adding to questions of whether it was meant as a vehicle to get people around or to drive up real estate prices and spur economic growth along the city’s waterfronts.

As the fiscal watchdog group Citizens Budget Commission noted in a report last year, the subsidy for each ferry ride was $10.73, ten times that of the New York City Transit system. It has since fallen to $9.34, and is projected to decrease with the two new routes adding about 2.5 million riders per year, according to EDC. The mayor has, however, struggled to justify those subsidies, particularly after data showed that only about 5.6 million people used the ferry in an entire year, when more than that number rode the subway every day (in the pre-coronavirus world). A majority of ferry commuters also tended to be white, upper-income New Yorkers rather than low-income commuters of color.

Ironically, New Yorkers from middle- and low-income communities of color are also less likely to be working from home during the pandemic and many make up the corps of essential workers keeping the city running via its subway and buses, hospitals, grocery stores, and more. Essential workers are also faced with often-overcrowded subways given that the state-run MTA has severely cut service amid plummeting ridership, a sickened workforce, and severe financial strain.

The mayor’s office did not respond to requests for comment for this article about the NYC Ferry system amid the coronavirus public health and fiscal crises. “New Yorkers have been doing their part to stop the spread of COVID-19 by staying home and practicing social distancing. These necessary steps by individuals across the city has led to a decrease in ridership on NYC Ferry,” said EDC’s Singleton. “As a result, NYC Ferry has been operating on a reduced schedule since Monday, March 23. NYC Ferry will continue to serve critical workers who must travel, but we ask that at this time people do not ride for recreation.”

At his daily coronavirus briefing on April 29, when asked by a reporter why NYC Ferry funding remained stable while significant cuts were made to the Staten Island Ferry, Mayor de Blasio said, "One there will be cuts to NYC Ferry and that will certainly be reflected in the next stage of the budget process. Two – obviously, it's never fun to talk about any cuts, but everything that has to be cut will be cut as we deal with more and more challenges."

NYC Ferry’s net operating costs were about $52.9 million in the 2019 fiscal year, up from $30 million in fiscal year 2017, and has since increased further, with added costs to come once new routes are launched.

Unlike other transit systems, NYC Ferry doesn’t rely on fares as a major part of its revenue. In the 2019 fiscal year, only 24% of its revenue came from fares, an increase of 2% from the year before, according to an analysis by Citizens Budget Commission. Each ride on the ferry costs $2.75, the same as a standard bus or subway fare, though it isn’t integrated with those systems. Despite the roughly $10 per ride subsidy to operate the system as it has been, de Blasio has insisted from the start on pegging the fare to that of the subway and bus, and said the city has been working on fare integration with the MTA, though several years in there has been no news on such a partnership.

The expansion of the program at a cost of $100 million in capital funds is also expected to drive those subsidies up. One route connecting to Staten Island is launching this year, and another to Coney Island will launch next year, while other routes will be extended and modified. The two new routes are meant to add 2.5 million riders each year, the EDC projects, and will cost about $25.5 million annually to operate. According to the CBC report, the subsidy on each ride on the Coney Island route is expected to be as high as $24.75.

Sean Campion, senior research associate at CBC, who authored the report, said the coronavirus offers an opportunity for the city to review how it funds and operates NYC Ferry and to find ways to make it financially sustainable. “This should give them some opportunity to review some of the sort of inherent inefficiencies in the program,” he said.

“It may no longer be possible, given everything else going on, to maintain the level of subsidy than with a better structure than it has,” he added.

The ferry is also heavily reliant on leisure ridership, Campion pointed out, and that may not recover quickly. “If people are more reluctant to ride public transit and take discretionary transit trips,” he said, “...if tourism doesn't come back, it could take longer for that to bounce back more so than the commuting patterns. If that happens, that will magnify the need for subsidy.”

In the new coronavirus reality, there’s a flip side to the ferry discussion, however. With the subways crowded, increasing the risk of exposure to the coronavirus, even critics of the ferry system may reluctantly embrace it.

“Given that the subways are not a great way of commuting while adhering to physical distance and guidelines, New Yorkers need all the alternatives they can get,” said Joe Cutrufo, communications director for Transportation Alternatives, an advocacy group.

But Cutrufo remains critical of the already high subsidies, noting that the city hasn’t been as generous when it comes to the Citi Bike program. “Our bike-share system does not have a public subsidy and we've seen bicycle use as one of the very few ways that people can get around while maintaining those physical distancing guidelines,” he said. “So I think we need to take a fresh look at how the city subsidizes its transportation network.”

Advocates like Cutrufo are hoping that when life in the city moves back toward ‘normal’ fear of the coronavirus doesn’t lead to an increase in cars on the road as people avoid public transit, which would further clog the city’s typically crowded streets.

“The way we see it, people are looking to alternatives and we want to make sure that we don't see driving increase,” Cutrufo said. “The ferry can be part of that solution.”

Note - this article has been corrected to note that the overall per-ride ferry subsidy is expected to decrease, not increase.

Note - this article has been updated with comments made by the mayor on April 29.