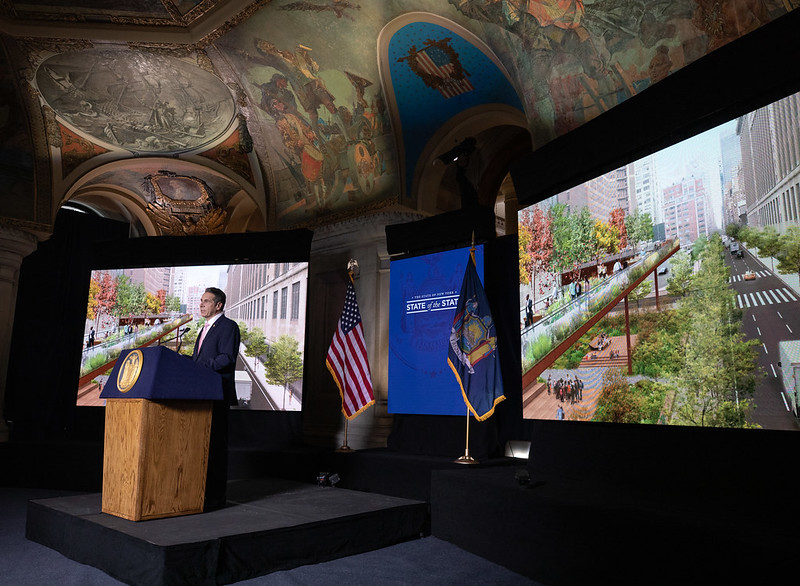 In his fourth and final 2021 State of the State speech, Governor Andrew Cuomo committed New York to an ambitious infrastructure program worth hundreds of billions of dollars that he said will create hundreds of thousands of jobs and put the state on the path to recovery from the coronavirus pandemic.

Announcing infrastructure projects spanning the state, Cuomo cited the New Deal under President Franklin Delano Roosevelt, which helped revive the nation’s economy out of the Great Depression. Though there were several big ticket items in his presentation, he mostly touted projects that are either near completion or that were already put into motion long before the pandemic.

COVID-19 has devastated the state’s economy, driving unemployment to record levels, leading to hundreds of shuttered businesses, and obliterating tax revenue. The state has an unresolved budget deficit, which was last estimated in October to be about $15 billion, though that figure has not been revised after the second round of federal stimulus dollars flowed to New York in December. The governor is expected to unveil his Executive Budget for next fiscal year, which begins April 1, in the coming weeks, and is also expected to more clearly lay out his plans for the rest of this fiscal year. A great deal will depend on what else comes out of Washington, D.C., where Cuomo has sought a major bailout and President-elect Joe Biden is proposing another massive package that includes state and local government aid.

“The New Deal was born in New York State during Roosevelt's governorship because its bold, daring, innovative spirit has always been our New York ethos,” Cuomo said as he unveiled his infrastructure plan, possibly the largest part of the governor’s State of the State agenda, which he has presented over the last four days during speeches from the state Capitol. He’s previously announced a mass rapid testing program to control the pandemic; broad job creation and economic development plans, revival of the arts and culture industry; a transition to a green economy; and affordable internet legislation, among other things.

Over the years, Cuomo has repeatedly boasted of the state’s infrastructure program and investing billions where the federal government has failed to meet needs and spur growth. He cited the program’s continued success even during the pandemic, noting that several projects were accelerated and inaugurated including new terminals at LaGuardia Airport in New York City, the new Exchange Street train station in Buffalo, the 750-mile Empire State trail, and others. And he expressed confidence that the new Democrat-led Congress and Biden will be a more favorable partner in building infrastructure than prior administrations. “I believe that New York's capacity and federal resources can be a potent combination to do even more, and now is the exact time to do it,” he said.

Cuomo outlined projects he said reflect $306 billion of investment in infrastructure, including several new projects in New York City aimed at improving capacity and access to mass transit systems, while also touting the recent opening of the $1.6 billion Moynihan Train Hall in Manhattan. He announced a 140-acre Manhattan Midtown West development project with a total of $51 billion in planned investment, saying it will create 196,000 jobs. It will include renovating Penn Station and expanding it with eight new tracks at a new terminal, which would help accommodate additional capacity once the Gateway Tunnel project is completed, he said. Funding for the cross-Hudson Gateway Tunnel has been held up for years under the Trump administration and Cuomo expects it will be expedited under Biden.

The redevelopment will stretch from Broadway east of Penn Station all the way to the Hudson River in the west, which includes the ongoing expansion of the Javits Center. He said the state would provide 14 sites for new retail, commercial, and residential development, including for 1,400 units of affordable housing, proposed plans to expand the High Line both east and northwards. The state will also renovate the Port Authority Bus complex, he said.

Cuomo reiterated the state’s continued investments in the MTA’s $51 billion capital program to upgrade signals, purchase new trains and buses, and make subway stations accessible to all. Though he was not specific, he said parts of the plan would be accelerated, and he promised that the 2nd Avenue Subway would be extended from 96th Street to 125th Street, though that plan has been in the works for years and has stalled without federal aid.

The governor also unveiled infrastructure investments across the rest of the state, including some ongoing projects that will be completed this year and in coming years. They include completion of the  $2.6 billion Long Island Railroad track expansion in 2022; new access ramps for Hunts Point Market in the Bronx; completion of the Belmont Arena, home to the New York Islanders, in time for the 2021-22 season; the expansion of the Blue Cross Arena in Rochester as part of ROC the Riverway project by the end of the year; a new park in Buffalo which is shovel-ready and awaiting federal approval; completion of the Albany Skyway elevated park this year; completion of the Binghamton University Decker School of Nursing this year; the new Utica Hospital in the Mohawk Valley, a project that has broken ground and will be finished in 2023; completion of the Newburgh Beacon Bridge in 2022, nine months ahead of schedule; and a new Legoland theme park in Orange County that will open this year; among other projects.

“That's not just the largest infrastructure plan in New York history. It's the largest, most ambitious plan of any state in the nation,” he said.