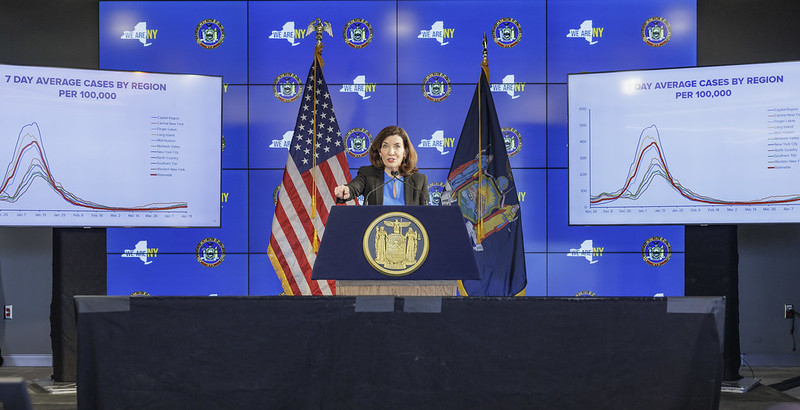 The state is soliciting bids for outside consultants to conduct a long-awaited review of New York's response to the COVID-19 pandemic, Governor Kathy Hochul announced Wednesday.

The governor is seeking a consulting firm that was not involved in the state's response to do a comprehensive assessment of the steps New York took to curtail the virus and develop an action plan to correct response systems for future emergencies. The announcement came two weeks after Gotham Gazette reported the governor's office had not yet issued a request for contract proposals for the study that she and spokespeople had previously indicated was already "underway." That revelation set off a new round of scrutiny of Hochul’s promise to conduct a thorough independent review and a firestorm of criticism from editorial boards, political opponents, and others.

"It's not mandated by law but it is something I feel is important because New Yorkers deserve the best from their government," Hochul said at a press briefing Wednesday as she announced a request for proposals and key details of the review plan. "They need to identify what worked and what did not work and why."

Hochul said the investigation, dubbed an "After-Action Review," would be the first of its kind in the country regarding COVID-19 and could serve as "a guide for future leaders in the state of New York, but also for other states."

"This is going to be an important resource for us," she said, calling it a "blueprint" for future emergencies. "It's not going to be done overnight. It's going to take a fair amount of time but we're going to get it right."

The review is expected to begin in November and last for roughly a year, and will be overseen by New York State Division of Homeland Security and Emergency Services Commissioner Jackie Bray. Previously involved in several aspects of New York City’s pandemic response under Mayor Bill de Blasio, Bray was appointed to her current position after Hochul took over as governor last year.

Hochul has been facing intensified questions and criticism since Gotham Gazette reported on July 6 that her office only had a vague timeline of "later this summer" for launching the search for outside firms through an RFP. That came after a spokesperson in April told Gotham Gazette the review was already "underway" and Hochul herself told reporters in May, "actually, we have outside consultants who are going to be working with us."

"We had thought it would start when the pandemic was completely in the rearview mirror but that's not going to happen any time soon so now is the right time to go forth with those preparations," Hochul said at the briefing Wednesday, which in part focused on the current covid surge.

Hochul's timing has been called into question by critics who have accused her of dragging her feet on the review, which could place her in the crosshairs as a high-ranking member of the Cuomo administration as lieutenant governor and leader of the state through the Omicron and BA.5 waves as governor. While Hochul was not a part of Cuomo’s inner circle and clearly kept at arm’s length by the disgraced former governor (he did not mention her once in his much-criticized covid memoir), whose handling of the pandemic has been the subject of several scandals and investigations, she did have a role coordinating the state response in Western New York, where she is from.

Under the timeline outlined by the governor's office, the after-action will not begin until around the general election this fall when Hochul is hoping to be elected to her first term as governor.

"Instead of swift answers, she’s dragging her feet just long enough so that the initial findings don’t come out until after the November election," wrote her Republican opponent, U.S. Rep. Lee Zeldin, in a statement Wednesday.

Hochul made the announcement Wednesday as part of a presentation on the state's "Fall Action Plan" for fighting covid, which includes public health policies that will ostensibly unfold before the state review begins in November.

The 85-page request for proposals (RFP), the document used to solicit government contractors, outlines some of the scope of the proposed study. In addition to investigating the response, the consulting firm or firms will be asked to produce a report with best practices and recommendations for handling similar catastrophes or future coronavirus waves.

The review will examine how hospitals were managed and what medical procedures were suspended when facilities faced an onslaught of positive cases and the entire healthcare system was under strain. It will also look into policies around the transfer of individuals into congregate settings, "including homeless shelters, group homes, nursing homes, jails and prisons," language that touches on several areas of controversy, most prominently the Cuomo administration nursing home policy that became the source of an attempted cover-up by the former governor. (The list does not explicitly mention state psychiatric facilities, which also received covid-positive patients from hospitals at the height of the pandemic and whose per capita death rate dwarfed rates in all but nursing homes.)

Government watchdogs and public health experts have been calling for a review of the state's response for months as a basic civic duty following mass death and illness, socio-economic catastrophe, and two years of emergency actions that have upended life for millions of New Yorkers. Those calls have been complimented by a separate but aligned push for accountability from the families of nursing homes residents and a bipartisan group of state legislators.

"After months of asking for an independent investigation into the State’s handling of the nursing home crisis, I’m encouraged to see the Governor taking the first step towards getting closer to the truth for our grieving families," wrote Assembly Member Ron Kim, a Queens Democrat and outspoken critic of the state's handling of nursing homes, in a statement to Gotham Gazette. Kim, who sponsors a bill with Republican Senator James Tedisco to create a nursing home review commission, said he hopes the state's after-action reveals the total impact of a March 2020 state Department of Health order to return covid-positive hospital patients to nursing homes. He hopes it will also answer questions about the intent of policies to limit the legal liability of home operators and cover-up the true number of nursing home deaths.

According to Hochul and the RFP, the review is also to explore many of the pandemic's secondary, but no less devastating, effects: the shutdown of schools and its impact on students, the designation of essential businesses, and what protections existed for essential workers. It is intended to analyze the procurement of essential goods and services, something that has been going on with limited oversight due to over two years of successive emergency declarations signed by Cuomo and Hochul.

The RFP instructs consultants to assess how data has been shared with local governments and the public and how the state should manage and implement emergency procedures in the future. It may also look at "The effectiveness of policies and programs in reducing disparities in health outcomes for communities of color," one of the pandemic's most visceral consequences.

The governor's office is expected to pick a firm to conduct the review in mid-to-late September and for the contract to start early-to-mid November. The after-action team would deliver initial findings within six months and complete its study after a year, Hochul said.