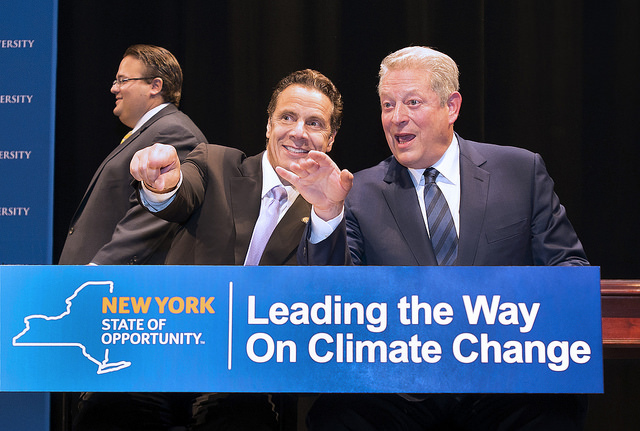 New York’s 2018 gubernatorial election has largely been eclipsed, like so many things in United States politics, by a massive Trump-shaped shadow. Within that shadow, Andrew Cuomo and Marc Molinaro have argued about the health of upstate New York, management of the MTA, and dueling corruption charges, among other topics. But one looming issue, climate change, has seemed to escape the notice of the two candidates, even as news related to it becomes more dire and New York’s Legislature sits on proposals to shift the state to a 100 percent renewable energy environment.

“I would say no, but that's generally my answer for most candidates,” Aracely Jimenez-Hudis, a member of the climate justice organization Sunrise NYC said when asked if she thought either of the major party gubernatorial candidates were talking enough about climate change. And while Jimenez-Hudis works with a group whose main focus is climate change, the fact remains that it simply isn’t an issue either candidate has decided to address this year.

Molinaro doesn’t include a platform on climate change or the environment on his website, but told Gotham Gazette that he accepts climate change as science and that it is a trend impacted by humans; he believes in “the inherent capacity of man to overcome any challenge.” Molinaro also said he agrees with the governor’s idea to get New York to 50 percent renewable energy by 2030, but that rather than the state investing large amounts of money in private companies, government “ought to create an economic climate where the industry can actually compete and thrive.” He doesn’t believe in “cutting checks,” he said, but he is open to the right blend of tax incentives and regulatory changes to encourage a greener economy.

Beyond the question of energy sources, Molinaro said that congestion pricing as a funding mechanism for expanding public transportation and reducing street congestion, and changing zoning codes to reduce damage to the environment and make clean energy use more effective were ideas he’d look to in order to reduce emissions as a whole.

On the trail, though, the Dutchess county executive and Republican nominee for governor has said he’s open to a “pilot program” allowing fracking in New York’s Southern Tier and has expressed a worry that New York is missing out on an economic boom by not allowing the practice. While Molinaro has touted his past endorsements by the Sierra Club as part of his proof that he’s a different kind of Republican, the organization endorsed Cuomo over him this year.

On his own campaign website, Cuomo writes that his administration has made New York a national leader on climate change, casting it through the lens of resisting the Trump administration, writing that he’s “picking up the mantle of climate leadership where Washington is failing.” His office has funded over $20 million worth of flood protection efforts on Long Island this year, and the Sierra Club endorsement for the governor notes his leadership in banning fracking in 2014 and lauds him for committing New York to generating 50 percent of its energy from renewable powers like wind and solar by 2030, but the biggest instance of the governor’s name being attached to the word “climate” this campaign was when he suggested “climate-based” reasons were driving people’s decision to move out of upstate New York.

Cuomo has campaigned little on forward-looking policy of any kind, mostly highlighting past accomplishments and staking out anti-Trump ground. When he has discussed a third-term agenda, climate change is background noise. His Nine Point Pledge for a Stronger Long Island, signed with each of the Democratic state Senate candidates on the island, contains passing references to “resiliency projects” and passing the governor’s bill outlawing offshore drilling in New York.

The governor has faced his own criticism on environmental policy, including an occupation of his Manhattan office earlier this summer by activists with Sunrise over his refusal to sign a pledge to not take fossil fuel-linked campaign donations and for not getting behind the Climate and Community Protection Act. The CCPA, a bill that seeks to move New York to a 100 percent clean energy economy by 2050, with power grid transitions and resiliency efforts paid for by a tax on greenhouse gas emissions, got a boost of media and campaign attention during the primary campaign when Cynthia Nixon threw her support behind it. Nixon called the CCPA the most important work of her campaign at a recent gala for New York Communities for Change, work that got her kudos from environmental activists. But even in the primary’s lone debate, the bill only came up briefly.

There was no discussion of climate change in the single Cuomo-Molinaro debate, which took place last week. It’s an unfortunate turn of events according to Howie Hawkins, the Green Party’s gubernatorial candidate, because New York could set the tone for the way the rest of the country reacts to the issue. “What we do counts,” Hawkins said, citing the size of New York’s economy compared to the economies of entire nations, “and we think what it does for the economy, besides what it does for the climate, will set an example that other people will want to emulate. Just like Franklin Roosevelt did some public employment when he was governor and it became a model for the jobs programs of the New Deal, I think we set an example [with a Green New Deal], we get ahead of the curve and other people are gonna want to follow our lead.”

Hawkins sees a transition to a green economy, part of what he calls a Green New Deal, as one of the many issues residents north of Westchester say have been ignored this year. “The thing about a serious climate action program is it’s a big economic stimulus, particularly upstate where you have to do a lot of energy installation,” Hawkins said, adding that the region could also become a manufacturing hub for green technology that could create jobs and be an example for the rest of the country.

Cuomo has in fact focused some of his energies on creating more affordable forms of power through the Reforming the Energy Vision program, the umbrella strategy to move New York towards 50 percent renewable power by 2030 and reduce greenhouse gasses by 40 percent from their levels in the 1990s. Within that strategy, New York State has partnered with utility companies to work on projects testing out ways to efficiently deliver green energy, has invested in workforce training in green energy and companies related to the field and has taken “a more market-based, decentralized approach” to shifting the state to renewable power. The state also has a high-stakes partnership with Tesla that’s supposed to bring 1,460 jobs to Buffalo, following the company’s acquisition of SolarCity, the solar panel manufacturer the state invested $750 million in (an investment that was later discovered to be caught up in Alain Kaloyeros’ bid-rigging scheme).

The lack of climate change talk has “been the pattern in the presidential debates, and certainly in New York-level debates,” Pete Sikora, an activist with New York Communities for Change focused on environmental issues, told Gotham Gazette. “Climate change is an important issue to voters, but if you're looking at Molinaro versus Cuomo, it hasn't become a defining contrast.” NYCC endorsed Nixon in the primary.

Hudis-Jimenez said that Nixon’s focus on the the Climate and Community Protection Act allowed her and other canvassers to do specific outreach directly to voters through climate canvasses for Nixon, which was helpful to spread the bill’s message, but ultimately not as scalable as something beamed into homes across the state.

“More people will tune into a debate probably than are contacted by canvassing or phone-banking, so the issues that get talked about during a debate are the ones voters will think about when they're going to the polls,” she said. “So the fact that climate change got maybe five seconds [in the Cuomo-Nixon debate] said a lot about the work that still needs to be done getting climate change to be a top electoral issue.”

“I don't know why it's not a huge issue,” Manhattan Borough President Gale Brewer told Gotham Gazette. “You would think, considering Long Island and Westchester, so much of the region was underwater, you would think it would be more of a discussion.” Part of the reason for its absence as a front and center issue, Brewer speculated, was that unlike the everyday experience for New Yorkers that is a broken subway, “we don't experience water coming into our buildings everyday.”

It is getting to be more of an issue though, Brewer noted, though there can be a subtlety to it that hides the more dire nature of the crisis. “There's a difference between a big storm and just plain old surge. Even if you don’t get a big storm, the water surge is a different issue. So you could get something like no storm and still a high water situation,” she said, noting she got a high water alert before this weekend’s Nor’easter.

The absence of climate change and what to do about it from the broader gubernatorial campaign also chills questions of whether even the proposals that Nixon pushed go far enough, or if something like the Green Party-supported New York Off Fossil Fuels Act is the right path for the state. That bill, sponsored by Assemblymember William Colton and state Senator Brad Hoylman (who also just wrote an op-ed calling on the state to pass the CCPA), both Democrats, would move New York to 100 percent clean energy by 2030, a necessary step in the face of the continuing climate crisis and what Hawkins said were insufficient proposals by Cuomo and Nixon, whose proposals both called for New York to use 50 percent renewable electricity by 2030.

“They want 50 percent clean electricity by 2030, but electricity is just 28 percent of the carbon footprint, it doesn't deal with transportation, industry, agriculture or buildings,” Hawkins said. You get 50 percent of that reduced, that's 14 percent really,” he said as a critique of both approaches.

Even if climate change hasn’t taken a star turn in any general election campaigns getting media attention, activists like Sikora and Hudis-Jimenez are gearing up to keep fighting after the election. “Working towards a goal of 50 percent renewable energy is half-assing it,” Hudis-Jimenez said, promising to continue to keep the pressure on legislators to be more ambitious.

“Whether the governor is talking about it now or not, what we want is for him to embrace [the CCPA], put it in the budget and pass it,” Sikora said. “We'll have a Senate and Assembly that is Democratic, hopefully, and in that scenario, this legislation should pass and the governor should lead the charge. We'll be coming hard on passage of that kind of legislation.”