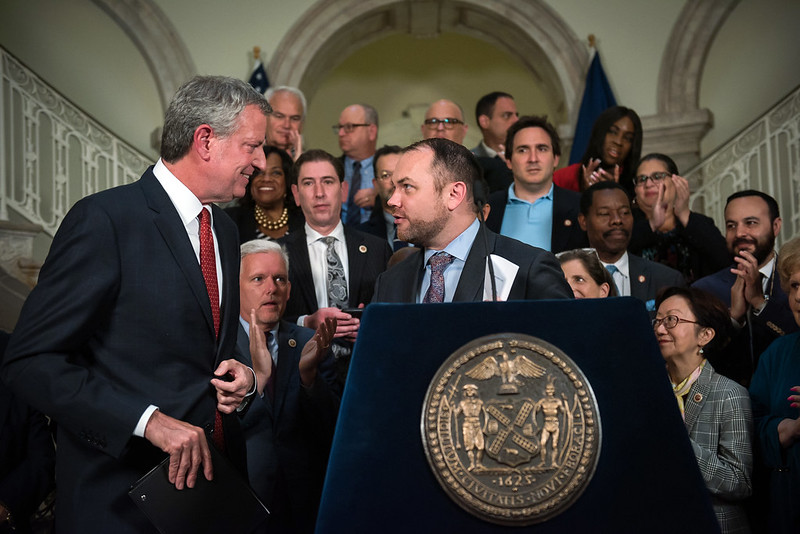 Mayor Bill de Blasio and other top city officials have remained mostly quiet about their positions on a set of proposed changes to city government and elections, which are set to go before voters when early voting begins on Saturday. The five “yes” or “no” ballot questions include 19 distinct proposals from the 2019 Charter Revision Commission, whose members were appointed by the mayor, comptroller, public advocate, City Council speaker, and five borough presidents. Yet those same elected officials have been hesitant to say whether they approve of the commission’s recommendations.

While some of the city’s top elected officials, namely City Council Speaker Corey Johnson and Public Advocate Jumaane Williams, have when prodded expressed their thoughts on some or all of the proposed charter amendments, Mayor de Blasio is said to still be reviewing the proposals and other top officials have been reluctant to opine on the potentially consequential changes.

The ballot proposals include instituting ranked-choice voting for some city elections, strengthening the city’s civilian police oversight body, and making various other changes to city governance, budgeting, and land use processes.

Gotham Gazette surveyed the city’s most powerful elected officials to find out how they plan to vote on the proposals and whether they have taken positions on any provisions in particular. Almost all of the elected officials contacted had at least one appointment to the body that created the proposed amendments (Williams is the exception given that he took over as public advocate after his predecessor, Attorney General Letitia James, had made the office’s one appointment to the charter commision).

Williams, City Council Speaker Corey Johnson, Comptroller Scott Stringer, and Manhattan Borough President Gale Brewer have all indicated they support a “yes” vote on all five ballot questions. (Johnson had initially expressed enthusiastic support for a “yes” vote on question one, which includes instituting ranked-choice voting, and on the land use question, number five, then said he supports all five sets of proposals in an October 31 tweet to Gotham Gazette).

The commission was conceived by James and Brewer, and created through City Council legislation with the support of Johnson, who wound up with the power to appoint several members and the commission chair. Appointments were apportioned so that no one official or entity held a majority. Gotham Gazette contacted each of the appointing offices and received varying degrees of response, while Johnson and Williams made some of their thoughts known during a recent radio and podcast interview, respectively, as well as Johnson's subsequent tweet.

To amend the Charter, the city’s central governing document, the proposed changes must be approved by voters, who can weigh in either during the new nine-day early voting period October 26 through November 3, or on Election Day, November 5.

The commission developed the five questions, which encompass 19 individual measures to change city governance. As captured by the commission, each question covers a different category of potential reform: elections, Civilian Complaint Review Board, ethics and governance, city budget, and land use.

Question one, which mainly deals with ranked-choice voting, has garnered widespread support and almost no opposition, and could have a major impact on how party primaries and special elections work.

Together, the changes in questions two through five amount to a relatively minor retailoring of certain aspects of city government, not a large-scale overhaul. But, some of the provisions are considered important by various officials, experts, and interest groups.

Perhaps the most controversial changes voters will decide on related to the Civilian Complaint Review Board, the city’s civilian police oversight agency that investigates certain allegations of police misconduct. One provision within question two would expand the jurisdiction of the CCRB to include prosecuting officers who lie while they are under investigation. That provision is being supported by many police reformers and opposed by the Police Benevolent Association (PBA), the state’s largest law enforcement union.

Another proposal, found within question four, to allow the city to use a “rainy day fund” for savings during times of prosperity is being supported by the Citizens Budget Commission and other fiscal watchdogs.

Mayor de Blasio has not taken a public position on any of the five questions or the specific proposed amendments they contain.

“Mayor de Blasio continues to review the Charter revision questions that will be on the ballot,” wrote administration spokesperson Will Baskin-Gerwitz in an email to Gotham Gazette. De Blasio appointed four of the 15 members of the Charter Revision Commission that devised the proposals, two of whom currently serve as top officials in his administration.

While still avoiding a public position, Baskin-Gerwitz says the mayor “encourages every New Yorker to do their civic duty and have their say on their city’s Charter after early voting begins on October 26 or on Election Day November 5.”

De Blasio’s non-position on this year’s proposed charter amendments contrasts with his push last fall to secure a “yes” vote on the three ballot questions last year, placed on the ballot by a charter revision commission created and appointed entirely by the mayor.

Four of the officials contacted by Gotham Gazette have publicly expressed support for all five of this year’s ballot questions.

Hazel Crampton-Hays, a spokesperson for Comptroller Scott Stringer, said he supports all five proposals but would not comment on any specific proposal nor whether he is urging New Yorkers to vote in favor of the amendments. Some of that hesitancy may be related to questions about whether elected officials are allowed to in their official capacities discuss items on an election ballot.

Manhattan Borough President Gale Brewer is “100% supportive of all five ballot questions and is urging New Yorkers to vote for them all,” according to her press secretary, Courtney McGee. McGee did not elaborate on any of the positions or what outreach Brewer has done. There are major questions about how many New Yorkers actually know about the ballot questions and the ability of the Charter Revision Commission to get the word out, especially with limited help from top elected officials.

On the Max & Murphy podcast, Public Advocate Williams said, “I am in favor of voting ‘yes’ on all of the ballot initiatives, including ranked-choice voting.” A number of the proposals deal directly with the office of the public advocate. Two of the provisions would give the public advocate an appointment to the Conflicts of Interest Board and Civilian Complaint Review Board, and another would guarantee the public advocate’s budget at a set minimum calculated based on the size of the overall city budget.

“If people come out and vote, [we] may have an independent budget, which I think is critical. It sucks if you have to go ask the people for money that you are supposed to hold accountable,” Williams said.

Johnson, who appointed four charter revision commissioners including the chair, spoke about two of the measures -- ranked-choice voting, and changes to the city’s land use process -- on The Brian Lehrer Show on Monday. He said he supported both -- which are parts of question one and five, respectively -- but did not discuss any of the other proposals. Johnson’s office did not respond to multiple requests for comment for this article, but the speaker then made his opinion clear in the October 31 tweet.

Other officials have either weighed in on specific aspects of the ballot questions, did not respond to requests for comment, or declined to comment.

“He has also been a strong champion of police accountability and transparency dating back to his days serving in the NYPD, and supports any proposal that would further the goal of making police more accountable, while upholding the public safety gains we’ve made in recent decades,” Allon wrote, apparently referring to the amendments related to the Civilian Complaint Review Board. He did not clarify whether the borough president explicitly supports that ballot question or others.

“We are closely reviewing the other questions, and encourage a robust debate in the weeks ahead to ensure all New Yorkers are informed and make their voices heard on these important proposals,” added Allon.

A spokesperson for Queens Borough President Melinda Katz declined to comment. Katz is the Democratic nominee for Queens District Attorney, appearing on the ballot in her borough along with the charter questions, and expected to win that election easily.

Attorney General Letitia James, who as public advocate co-sponsored the legislation creating the charter commission and appointed one of its members, did not respond to multiple requests for comment.

Some officials or their representatives expressed trepidation about whether they were allowed under the city’s conflicts of interest law to promote their positions on ballot questions at all. During his conversation with Lehrer, Johnson made sure to indicate he was talking about his personal, not official, positions on ranked-choice voting and other measures.

A Conflicts of Interest Board (COIB) representative said they could not comment on general policy matters related to elected official conduct, but added in an email, “To the extent that elected officials may not understand the scope of the application of the conflicts of interest law to their conduct you should feel free to refer them to us.” The spokesperson said they could not respond to a question asking whether any officials had sought clarity from COIB on publicly promoting their positions on the referenda.

Johnson, Adams, Stringer, and Diaz, Jr. are all Democrats expected to run for mayor in 2021, what would be the first city election to use ranked-choice voting should it pass.

Note: this article has been updated with Johnson's Oct. 31 tweet.