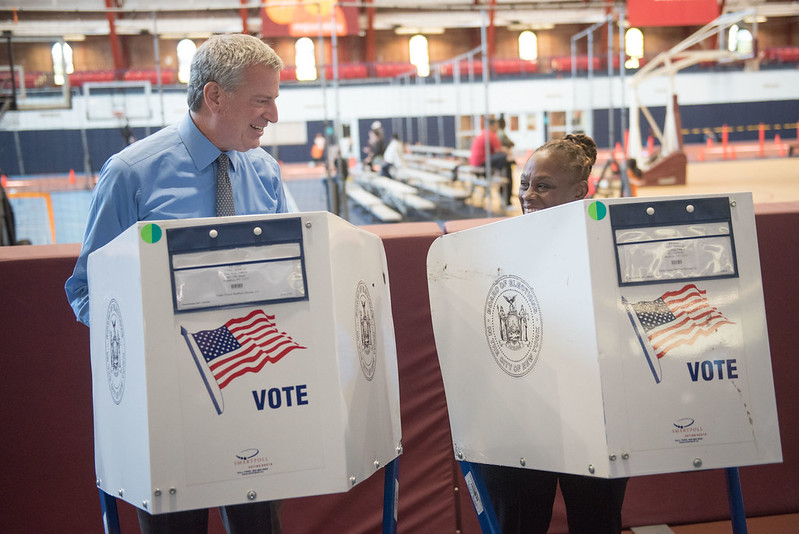 Mayor Bill de Blasio is dodging questions about his position on a series of ballot referenda that propose changes to city elections and governance. In two interviews Friday and Monday, the mayor avoided giving any specifics when asked repeatedly to discuss the proposed amendments to the city charter, all of which impact city services and administration, and he refused to say how he voted on them.

The ballot this year has five “yes” or “no” questions containing 19 distinct changes to the city’s core body of laws, which voters have the opportunity to approve or reject in the final stage of a unique amendment process in New York City. The proposals were placed on the ballot by a commission created by City Council legislation and appointed by a spread of city elected officials, including the mayor. The goal was to identify areas of reform in the charter that could not be easily addressed through the typical legislative process, and put them directly to voters.

De Blasio cast his ballot in Brooklyn on Saturday, the first day of the new nine-day period of early voting. (Registered voters have until November 3 to vote early; Election Day is on November 5.) Along with just a few candidate races, the ballot contains significant potential reforms, including to how some elections are run, how police oversight is carried out, how budgeting is done, and more.

“On the 19 separate questions, I’m not going to get into parsing what I feel on each one. I can give you a broad answer which is my team, my administration fully participated in this commission,” de Blasio said during his usual Friday morning interview on WNYC’s The Brian Lehrer Show, inaccurately describing the ballot proposals, which come in five questions.

The 15-member charter revision commission was designed to give no one entity a majority of appointments. Council Speaker Corey Johnson and de Blasio each selected four commissioners, with one appointee made by each of the comptroller, public advocate, and five borough presidents (Johnson selected the chair from his appointees).

When pressed by Lehrer to give more details on how he feels about -- and would vote on -- the potentially impactful provisions, de Blasio repeated his stance about the charter revision process while evading questions about how he intended to vote.

“I am comfortable with the overall result of this commission and my main point to people is I think they did good work and I think everyone should vote,” he said.

He maintained his posture about the charter revision process and questions when asked again by Errol Louis on NY1’s Inside City Hall Monday evening. Having voted over the weekend, he wanted to keep his ballot secret. “I have a blanket rule, I mean obviously everyone’s vote is personal, and I respect that in everyone else,” de Blasio said.

The five ballot questions cover general categories, each outlining more granular measures. Voters can weigh-in on charter changes to the city’s elections, Civilian Complaint Review Board, ethics and governance, budget, and land use.

De Blasio was asked directly about his positions on Questions 1 and 2, which have received the vast majority of public attention on the ballot proposals.

Question 1 on the ballot asks voters if they support for primary and special elections a system of ranked-choice voting, a balloting method that lets voters list candidates by preference rather selecting one in an all-or-nothing fashion. It would eliminate costly party primary run-off elections and help show broader support for the winner of crowded primaries and special elections. That proposed change has the backing of a coalition of election reform advocates and elected officials who have been promoting a “yes” vote on the question since September. There is no evident organized opposition to the proposal.

When asked directly by Louis, de Blasio expressed interest in ranked-choice voting but raised questions about what impact it would have on political participation and representation.

“We do know an advantage is it doesn’t require a runoff and therefore saves money and saves time and energy, and it’s true that a lot of those runoffs have been lower turnout,” the mayor said Monday. (De Blasio, himself, won a runoff for the Democratic nomination for public advocate in 2009.)

“I don’t think it’s 100 percent clear what it will yield but I’m certainly hopeful about it,” he added, giving an inkling of support.

Question 2, related to strengthening the police oversight function of the Civilian Complaint Review Board, has emerged as the most controversial piece of the proposed charter revisions. Among other things, the amendment would allow the CCRB to examine officers suspected of giving false testimony while under investigation for misconduct. If those suspicions are substantiated the agency could then bring charges in an administrative trial setting.

The CCRB recently led the high-profile prosecution of Daniel Pantaleo, the officer who placed Eric Garner in a deadly chokehold on Staten Island in 2014. The prosecution and conviction in an NYPD administrative trial led Police Commissioner James O’Neill to dismiss Pantaleo from the force in August.

CCRB officials say Question 2, if passed by voters, would also streamline the civilian agency’s operations by giving the executive director subpoena power and providing a baseline for its annual budget. Other provisions in Question 2 would codify existing practices, expand the number of appointments to the board and slightly alter who makes them (currently all the Board members go through the mayor).

The proposal has raised the ire of the Police Benevolent Association, the city’s largest law enforcement union, which last week launched a campaign urging its members and allies to vote “no.” The PBA on its website and in posts to social media has described Question 2 as a “power grab” by an agency with a “rampant anti-police bias.” In response, the CCRB released a “fact sheet” aimed at debunking what it describes as “myth” propagated by the police officers union.

Both Lehrer and Louis directly asked the mayor about his position on Question 2. In both instances he refused to discuss any particulars on the proposal and responded generally about the charter revision process.

“Because it’s 19 different subset questions I’m going to stay broad but say, yeah, we participated. In the end, again, I think the broad product of that charter commission was good. I think a lot of good work went into it. But again I’m not going to get into parsing on each of the questions,” he told Louis Monday.

Despite the mayor taking no public position, Gotham Gazette reported in June that administration representatives sought to secretly influence the charter revision commissioners in an attempt to kill the controversial proposal to allow the CCRB to pursue officers found to be lying to misconduct investigators.

De Blasio was not specifically asked about Questions 3, 4, and 5, which include an extended moratorium on former elected officials lobbying city government; a provision allowing the city to create a “rainy day” savings fund; and changes to the land use review process.

On October 17, nine days before the start of early voting, administration spokesperson Will Baskin-Gerwitz told Gotham Gazette, “Mayor de Blasio continues to review the Charter revision questions that will be on the ballot.”

Other top elected officials who appointed members of the 2019 Charter Revision Commission have taken positions on the proposals, mostly in response to Gotham Gazette inquiries: Comptroller Scott Stringer and Manhattan Borough President Gale Brewer both said they support all five ballot questions. Johnson and Brooklyn Borough President Eric Adams support Question 1 (ranked-choice voting) but have not expressed opinions on the others. Public Advocate Jumaane Williams also said he supports all five questions, though he did not make an appointment to the commission (that was his predecessor, Letitia James).