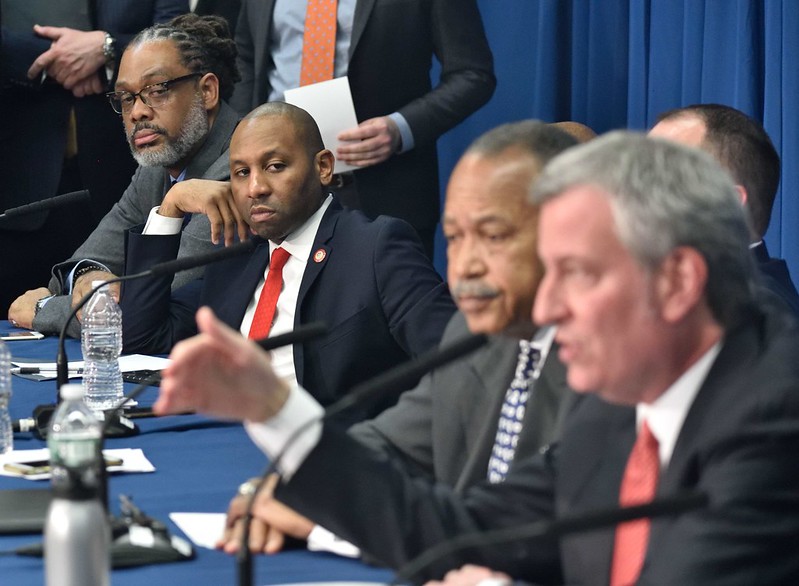 The NYPD’s body-worn camera program is meant to provide transparency and accountability about policing activity in the city, particularly in cases of high-profile incidents of police officers’ use of force against civilians. But more than seven months after body cameras were rolled out to every uniformed patrol officer, there are many questions about how the cameras are used and about the policies that determine the release of the footage to the public and independent watchdogs.

At a hearing on Monday, the New York City Council will examine the rollout of the program and ask some of those key questions, along with discussion of proposed legislation to require the NYPD to regularly publish data on the implementation of the body-worn camera program.

The Council’s Committee on Public Safety, chaired by Council Member Donovan Richards, is expected to delve into two main issues: the long delays in the release of body camera footage to the Civilian Complaint Review Board (CCRB), an independent agency that monitors and investigates allegations of abuse of power and misconduct by police officers; and the NYPD’s recently-published policy on releasing footage to members of the public and the news media.

Footage from body-worn cameras is crucial evidence in investigations by outside authorities into complaints against NYPD officers. Gotham Gazette recently reported that since March, when body-worn cameras were fully rolled out to 20,000 patrol officers, between 29 and 37% of the CCRB’s open investigations had pending requests for body camera footage, per monthly data from the Board. The delay for releasing footage also varies. The NYPD responded to 43% of requests within 30 days; 35% of requests were fulfilled within 30 and 60 days; in 13% of requests, there was no response for more than 90 days.

Even when footage is provided, it can be edited or censored. The NYPD says the delays can be attributed to the need to edit footage to ensure compliance with state privacy protection laws, but the CCRB has pointed out several other reasons that the department has cited to refuse to provide footage, while also pointing out that there have been many cases where the NYPD says body camera footage doesn’t exist, but it is later discovered that it does. [Read: New NYPD Body Camera Footage Policy Raises Questions About Editing]

Meanwhile, prosecutors in district attorney offices across the city automatically receive unedited body camera footage from the department when it is uploaded after an arrest. [Read: Vast Difference in NYPD Provision of Body Camera Footage to District Attorneys Versus Police Watchdog]

“One of the things that I want to explore the most is the issue around CCRB and obviously prosecutors gaining access to the footage much faster,” said Richards, a Queens Democrat, in a phone interview.

“The Civilian Complaint Review Board plays a very important role, just as we saw in the [Eric] Garner case,” Richards added, citing the CCRB’s investigation into then-NYPD Officer Daniel Pantaleo, who was recently terminated from the force, five years after he used a banned chokehold during an attempted arrest that led to Garner’s death on Staten Island. “And being that they are the agency that has oversight over the NYPD, they shouldn't have to wait 30 days. They should be able to have a system in place that gives them access right away,” he said.

The NYPD’s policy on public release has been criticized by a number of stakeholders and experts, first for including a 30-day timeline for footage of “critical incidents” and also for an explicit acknowledgement that the NYPD will exercise discretion in editing and omitting certain footage. The department’s recently (and quietly) released “operations order” around release of footage also makes no mention at all of the CCRB.

“One of the things we do also want to ensure is that the NYPD is not just doctoring certain parts of the video that they want the public to see,” he added. “We need to make sure that it's a full transparent process and that the public, who funds the NYPD, has the right to know what these interactions look like between the department and everyday people...which creates a higher standard, which then leads to more accountability and ensuring that there’s checks and balances.”

Besides the oversight aspect of Monday’s hearing, the Council will also discuss a bill proposed by Public Advocate Jumaane Williams that requires the NYPD to publish quarterly public reports on the use of body-worn cameras and an annual report on every incident that requires activation of a body camera.

The annual report would be far more detailed, requiring data on every incident recorded on body-worn cameras in the previous year including the date, time, and location of the incident; the law enforcement activity that triggered the recording; whether officers on scene were equipped with cameras; whether footage was recorded and the reason if it was not; whether the camera failed to clearly record audio; whether the footage was visually compromised or obstructed in any way; whether an officer told an individual they were being recorded; whether an officer switched off their camera before the incident was concluded; whether someone requested the footage under the state’s Freedom of Information Law; whether a use-of-force incident occurred during the recording, and the category; whether a recording was used for an internal investigation by the department or for an external probe by the CCRB; and the race, gender and age of the individual subject to law enforcement activity that led to the recording.