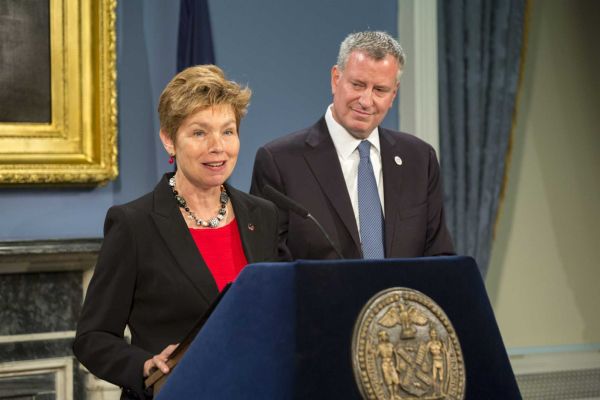 *Update: this story has been revised to reflect comment from Mayor Bill de Blasio given at an unrelated press conference on Wednesday, October 29, when asked by Gotham Gazette about his approach to the VAB

The nine-member Veterans Advisory Board (VAB) acts as a policy liaison between the New York City veterans community and the Mayor's Office of Veteran's Affairs (MOVA). The mayor is responsible for appointing five members, and the City Council Speaker four.

A review of those currently serving on the VAB shows six of the nine members are serving under expired terms, at least one of which has been expired since 2005 and another since 2012. These gaps open questions as to who is doing the critical job of VAB member, the integrity of the appointment process, and the attention being paid to the VAB by the elected officials in charge of these appointments.

The accuracy of the information regarding Rowan, however, is in question. The website shows his appointment date to be November 20, 2012, making his term expiration date November 20, 2015. He appeared and testified at the Council's veterans committee oversight hearing on Monday. Gotham Gazette contacted the mayor's press office to find out if the information on the site was accurate and which members are still active on the board. Multiple emails were not returned.

Gotham Gazette asked Speaker Melissa Mark-Viverito's office to find out if Devine, the only VAB member representing the Bronx, is still an active board member, and if so, when and how was he reappointed. The speaker's office would not answer any questions regarding Devine or Rowan, only saying the speaker's office is reviewing the appointments. Requests for more information in follow-up emails were denied.

VAB appointments under the purview of the mayor's office also show a lack of attention. There are four outstanding mayoral-appointed members of the VAB, three of which expired under Mayor Bill de Blasio on August 23, 2014: Lee Covino of Staten Island and Manhattan's Marvin Jeffcoat and Vincent McGowan.

The MOVA website indicates Paul Rieckhoff's term expired on February 17, 2012. Gotham Gazette reached out to Rieckhoff, who is CEO and founder of Iraq and Afghanistan Veterans of America (IAVA), to ask if he was still serving on the VAB and if he had attended any of the quarterly meetings since his term expired. Emails were not returned by press time.

Lee Covino, a VAB members since 2002, said in a phone interview Tuesday afternoon that he had not seen Rieckhoff at recent VAB meetings, but had seen Devine. Covino, whose own term expired in August, said he told the board that due to family issues he did not wish to be reappointed.

Gotham Gazette contacted the mayor's press office to see when the mayor would be filling the vacant VAB positions, or reappointing current members. Multiple emails were not returned by press time.

Gotham Gazette looked at the annual reports submitted by the VAB from 2002 to 2013. The reports listed issues brought up at each of the quarterly meetings and while some reports mention a "full board was present," neither an attendance sheet or roll call was listed. The reports never make mention of when board members were appointed or reappointed, however, there is mention when new MOVA commissioners were appointed.

When asked about the reappointment process, Covino, who was reappointed twice, said, "I don't think there was any process."

He said under the Bloomberg administration he told the board he would continue to serve and then got a letter saying he had been reappointed. Covino was quick to note that simply being interested didn't guarantee a reappointment—the Mayor or the Speaker had to approve.

Joseph Bello, a Gulf War veteran and veterans advocate, testified at the City Council on Monday that his name had been submitted, along with at least one other veteran, however, neither veteran was approved to be on the board. He said he was never given a reason why.

Update: Reached for comment by Gotham Gazette at an unrelated press conference on Wednesday, Mayor de Blasio said, "You will see in the coming weeks and months, a number of boards and commissions will have new appointees that will reflect our values." He did not specify regarding the VAB or a date.

When asked what criteria he would use to choose appointees to the board, the mayor spoke more broadly saying his administration would focus on mental health issues suffered by veterans and eliminating veteran homelessness.

The opacity regarding who is actually serving on the VAB, how they are appointed or reappointed, what they do, and when they do it plays into the call for reform that city veterans advocates have been making in recent years.

MOVA, the city office tasked with helping veterans connect with services on the city, state, and federal levels has a small budget of $549,112 for five staff members and operating expenses. Mayor de Blasio appointed former Brigadier General Loree Sutton to head MOVA in August and she is conducting a review of her office. Five people tasked with helping a city veteran population of roughly 200,000 is clearly problematic, leaving some to call for a separate Department of Veterans Affairs. As it stands, though, the VAB is a key tool for MOVA to discern what is going on with veterans - especially on the ground, in the boroughs.

Board members appear to be very connected to the veterans community, with many of them holding positions at other veterans organizations. But how they are using their networks to better connect New York City veterans to much needed services is not clear.

As was made clear at Monday's council hearing, VAB information is hard to come by. Meeting dates are not posted online, so if a veteran wants to bring an issue to the board, it is especially difficult to do so. If VAB members host or attend community events, that information is not published on the MOVA website, making direct outreach a matter of chance, not strategic policy. Up until the spring, VAB board member names were not even published online.

"Unfortunately, many veterans in New York City are not aware of the VAB and the role it plays within city government," Jason Hansman, senior program manager for IAVA, testified at the oversight hearing on Monday. "For our members who are aware of the group, many believe that historically it has not been taken seriously and that it has not had the impact on the lives of veterans and their families that it should."

The board has advocated successfully for several initiatives that were implemented including Veterans Treatment Courts, permitting issues with the Department of Consumer Affairs, and support for Junior and Senior ROTC programs in the City.

But as veterans continue to come home from current and recent conflicts, the VAB will need to play an increasingly critical role in helping veterans gain access to services for employment, housing, education, and healthcare.

"My hope is the people who they appoint [next] is not just a guy with a chest full of medals," Covino said. "We need someone who is familiar with direct services to veterans."