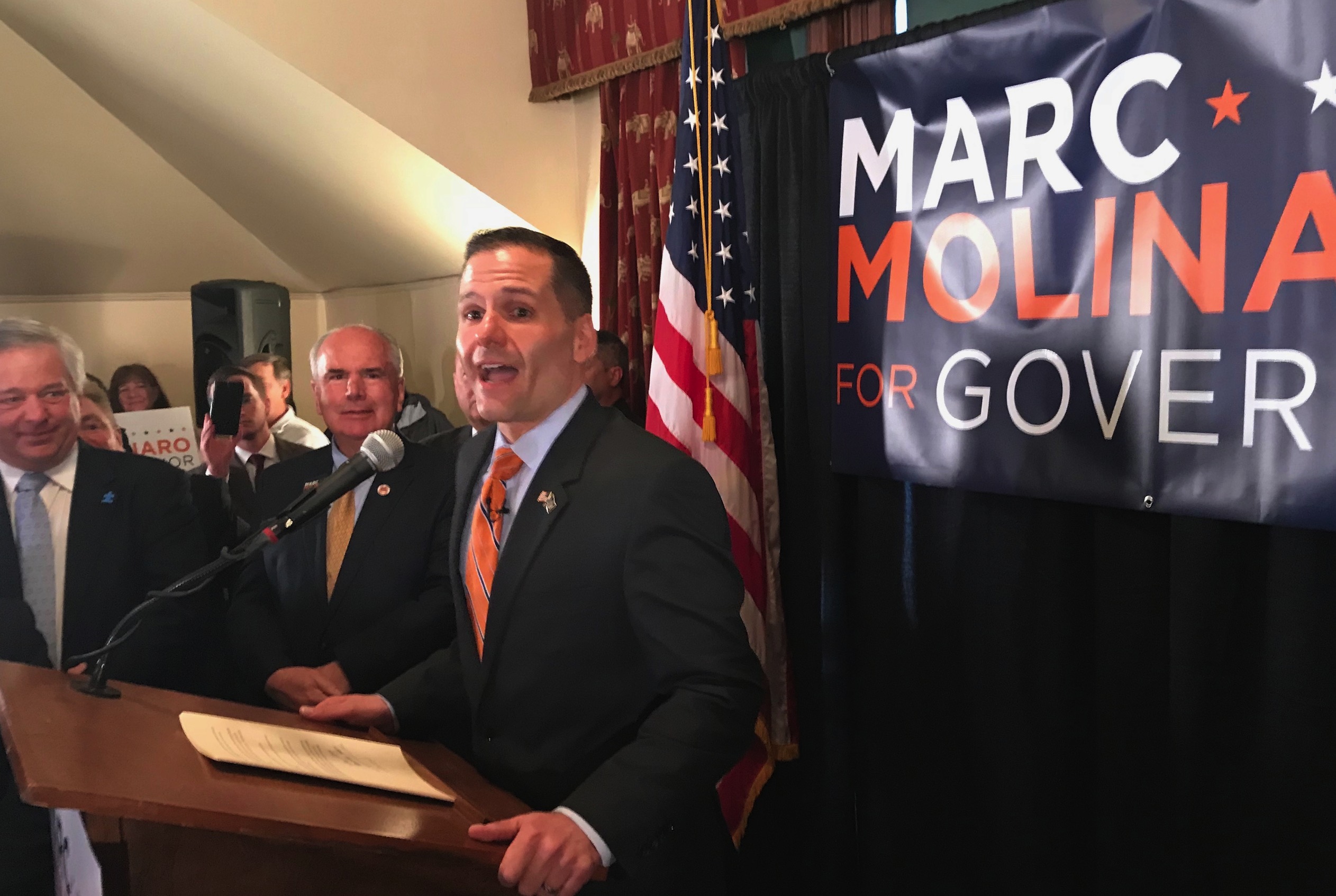 Ask Marc Molinaro about nearly anything, and the Republican nominee for governor will likely bring the conversation back to property taxes and affordability.

“My focus, ultimately, will be to drive down costs on middle class New Yorkers,” he said in a Wednesday interview with Gotham Gazette. “That focus, again, has to be on property taxes because New York, unlike every other state in America, forces more of its state spending on property taxpayers. Property taxpayers -- small tax base; large, acute burden on individuals with no respect to their ability to pay.”

Molinaro, currently Dutchess county executive, has repeatedly sounded the theme since formally launching his bid for governor April 2. While he has largely spoken in sweeping generalities -- promising “bold” proposals to come during his nomination acceptance speech at the May 23 state GOP convention -- details are starting to emerge.

Molinaro said that in addition to making the state’s 2-percent cap on annual property tax increases permanent, he would seek to phase out the so-called “millionaires tax” if elected. The income tax rate for the top bracket -- which includes individuals making $1 million or more and couples earning $2 million or more per year -- went from 6.85 to 8.82 percent in 2009, and has been extended by Democratic Governor Andrew Cuomo and a Legislature where each house is controlled by one of the two major parties.

“I would seek to have it expire over time,” Molinaro said of the millionaires tax. “I do think that there’s a way to make taxation in the state a bit more respectful of those who can’t afford it.”

He said he will release a detailed tax plan in the coming months. While Molinaro, like many other New York Republicans, has opposed the new, GOP-led federal tax overhaul because of its cap on local deductions, he has said New York must now work even harder to bring down the tax burden on its residents. He has also stressed that the state must reduce its burdens on localities -- often in the form of unfunded mandates -- so that counties, cities, towns, and villages can lower their taxes.

Molinaro, 42, has spent his entire career in politics, including terms as a member of the state Assembly and as mayor of Tivoli, where he became the youngest mayor in the country at age 19. He’s claiming the mantle of a regular New Yorker who gets the working and middle classes, comparing himself favorably to Cuomo and Cynthia Nixon, each of whom has much more wealth and fame. Molinaro’s tendency to talk at length about poor and struggling families in personal terms occasionally makes him sound more like a progressive Democrat than a fiscally conservative Republican.

“As a kid, I grew up on food stamps. I’m very sensitive to how the state treats those who are on the lower end of the income scale, living maybe in poverty or subsidized housing,” he said. During his nomination acceptance speech he raised his voice in declaring the he would “not concede compassion to anyone.”

He has made the state’s struggling dairy industry something of a focus. He allocated $651,781 of Dutchess County’s 2017 budget to protecting two farms there. He has been photographed hanging out in stables and often tweets about dairy. “Dairy day. I love dairy day. I miss dairy day. I should come back to Albany for dairy day,” he posted on Twitter earlier this month, in lighthearted fashion, while he has also tweeted about serious policy to help dairy farmers survive, such as through reducing regulations and taxes.

On the state’s minimum wage law, Molinaro voiced opposition to the recent increases. In 2016, Cuomo and state legislators reached a deal raising New York City’s minimum wage to $15 by the end of this year, with slower hikes in other parts of the state.

The Republican candidate, who also has the Conservative and Reform Party nominations, said he opposed the deal at the time and thinks the minimum wage “should be indexed to ebb and flow with the cost of living.”

“I also don’t necessarily agree that an unelected board of individuals should be able to establish statewide policy,” he added, in reference to the wage board that Cuomo had empaneled to help him craft the policy before he pushed it through the legislative process. “Those are decisions that ought to be made by citizens and their representatives.”

Asked whether he thought the state’s minimum wage should be lowered given broad economic growth, Molinaro replied with a laugh, “I’m not going to go there.”

The MTA is another area where Molinaro said he will roll out detailed proposals.

He said his priorities would be “depoliticizing” the authority’s board by giving members the power to fire the chair, currently Joe Lhota, along with conducting a thorough review of the MTA’s assets and creating a “road map” to improve service.

“Like Joe Lhota or not, the governor has too much influence,” Molinaro said, nodding to the fact that the governor nominates the MTA board chair, as Cuomo did with Lhota. “Far too many decisions are made without input from the MTA board…I would absolutely want to empower the MTA board to be able to fire the head of the MTA.”

Molinaro’s county includes the far reaches of the MTA transit system, and he is one of the executives empowered to jointly appoint an MTA board member. He often says that Dutchess is where “upstate meets downstate” and has joined the chorus of candidates and others criticizing Cuomo’s management of the MTA, especially the New York City subway system.

Molinaro did not comment, when asked, on MTA NYC Transit President Andy Byford’s new plan to fix service. He mostly spoke in broad terms about the MTA’s problems -- decrying its “ineffectiveness and erosion” -- but singled out service for people with disabilities as a priority.

“The fact is that if you are living with a disability or particular challenges -- special needs -- we don’t have adequate access, and that needs to be a priority regardless of where you live,” Molinaro said.

That belief connects to an initiative Molinaro launched in Dutchess -- which he made a point to again emphasize during the interview -- to improve services for people with intellectual and developmental disabilities. The program, called ThinkDIFFERENTLY, has featured events connecting people with disabilities with service providers and aims to help them develop job and life skills.

Molinaro said the program -- which has caught on in dozens of other localities -- would provide a paradigm for how he approaches disabilities as governor. Molinaro, whose daughter is autistic, often cites his experience as a father when discussing the issue.

“Whether it’s making the investments necessary to break down physical barriers -- making subway stops and platforms accessible -- or it’s saying to job creators, you need to do more to encourage employment for those living with disabilities or welcome those with special needs as consumers,” he said, “we need to educate and then we need to ensure that the system is easier to navigate.”

As might be expected for a relatively unknown Republican challenging a two-term Democratic governor in New York, Molinaro has trailed Cuomo in early polls. A Siena College poll released Wednesday, about five-and-a-half months before Election Day, showed Cuomo ahead of Molinaro 56-37, though the numbers showed an improving trend for Molinaro in the hypothetical matchup and the poll was celebrated by his campaign, which noted he is in better position than Republican challenger Rob Astorino was four years ago at the same time.

Like Democratic primary challenger Nixon, who also trails Cuomo in the polls, Molinaro has tried to put a dent in the governor’s numbers by tying him to corruption. Both challengers have pointed to the recent conviction of longtime Cuomo lieutenant Joseph Percoco and the upcoming federal trial of Alain Kaloyeros, the former president of SUNY Polytechnic Institute who oversaw some of Cuomo’s most ambitious development projects.

Those cases center upon proven and alleged abuses within the governor’s multimillion-dollar economic development programs, and the Percoco trial showed the former Cuomo government aide and campaign manager regularly using his executive chamber office while on leave to run the governor’s 2014 reelection campaign. Molinaro has put forth a variety of government ethics and campaign finance reform proposals thus far, some of which Cuomo has professed support for but not passed. The GOP nominee has said he would seek pay-for-play, or doing-business, campaign finance restrictions on entities seeking or holding state contracts, term limits for statewide elected officials and state legislators, and other changes to make government more honest and open.

Molinaro said the trials not only show issues of corruption under Cuomo’s nose, but that the governor’s approach to economic development is fundamentally flawed.

“I don’t believe the government should take taxpayer money and give it to private interests,” he said. “I don’t believe in cutting checks as if New Yorkers are [Cuomo’s] personal ATM. It’s not fair, it’s not appropriate and he doesn’t seem to know the difference between right and wrong.”

Asked how he would encourage statewide economic growth if he ended Cuomo’s development programs, Molinaro again pointed to tax cuts and lowering the cost of living.

“Drive down costs, make it easier for businesses to thrive,” he said. “That’s how you grow an environment that people can achieve greater success -- not by pickpocketing New Yorkers and giving it to political contributors.” Molinaro did not offer specifics.

He said that if elected, he would take a selective approach to Cuomo’s legacy, though he shied away from detailing what he would seek to undo. “My perspective is everything gets evaluated -- everything,” he said.

Molinaro did not answer a question about Cuomo’s gun control measures, including an expanded ban of assault weapons, known as the SAFE Act. While the governor has frequently touted the legislation as one of his main achievements, and New York City residents largely support it, it is considered highly unpopular upstate.

In a January interview, more than a month before the school massacre in Parkland, Florida and the movement it spurred, Molinaro had told Gotham Gazette, “Frankly, I do have concerns with how aggressive this governor has been. I think in some ways irresponsibly ignoring those that do support, as I do, the Second Amendment and forcing legislation without having the kind of local robust conversation necessary. I believe the constitution is as it’s written.”

The Cuomo campaign has seized on some of Molinaro’s more conservative positions, like on gun rights and his 2011 vote against marriage equality as a member of the Assembly, the passage of which is a top Cuomo resume item. Molinaro has said he has evolved on the issue. The governor’s campaign has branded him a Trump mini-me, though Molinaro has said he did not vote for the Republican president in the 2016 election.

In the Wednesday interview with Gotham Gazette, Molinaro did not list any other issue areas where he plans to roll out policy plans, though during his convention speech he appeared to promise a series.

Asked how, if elected governor, he would work with the state Legislature -- this fall, Democrats are likely to maintain their Assembly majority and Republicans are fighting against losing the Senate -- Molinaro said he would try to make the lawmaking process more inclusive.

He promised to end Albany’s “three men in a room” culture in which the governor and legislative leaders decide the budget and other important issues behind closed doors.

“I think the government can reach into the legislature and local communities to identify great thinkers, people who are engaged in trying to solve problems irrespective of party, and engage them,” Molinaro said. “That breaks down the power structure that has paralyzed state government.”