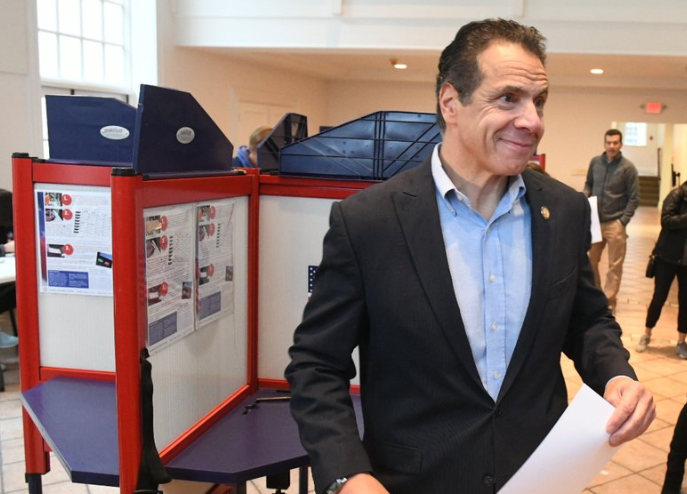 Democrats will take full control of New York state government in 2019 thanks to the reelection of Governor Andrew Cuomo and other candidates for statewide office, as well as wins in the state Senate that flipped control of the upper chamber. Democrats continue to hold a wide majority in the state Assembly. With help from New York, Democrats also flipped the U.S. House of Representatives.

The state Senate and gubernatorial victories open the door for Democrats to move a sweeping policy agenda that has been blocked by Republicans, some items for years, in areas such as voting, campaign finance, and criminal justice reform, women's reproductive rights, alterations to rent regulations, and more. While some results are still to be finalized, Democrats may have 39 seats in the 63-seat chamber come January.

The other Democrats running for statewide positions were also victorious, with U.S. Senator Kirsten Gillibrand and state Comptroller Tom DiNapoli both winning reelection by wide margins, as expected.

New York City and State races also contributed to a Democratic takeover of the U.S. House of Representatives.

And, in New York City, the three ballot proposals from Mayor de Blasio’s charter revision commission were all approved by wide margins, ushering in campaign finance reform, a new civic engagement commission, and term limits for community board members.

In the overall race for control of the state Senate, Democrats claimed a majority, and seemed on their way to winning at least 36 and up to 39 seats while several remained neck-and-neck and could also tilt their way, according to unofficial state Board of Elections results. With Democrats in control, Senator Andrea Stewart-Cousins will become the first woman of color majority leader of the state Senate. "I am confident our majority will grow even larger after all results are counted, and we will finally give New Yorkers the progressive leadership they have been demanding," she tweeted Tuesday night.

Much of the action was on Long Island, but one of the few Republican-held seats in New York City was also hotly-contested and appears to be a Democratic pick-up for Andrew Gounardes, though Senator Marty Golden has not conceded.

The current Republican majority leader, Senator John Flanagan, said in a statement, "This election is over, but our mission is not. Senate Republicans will never stop advocating for the principles we believe in or the agenda that New Yorkers and their families deserve."

Along with competitive races for state Senate seats, many eyes were on potential swing districts for New York seats in the House of Representatives, part of the national picture whereby Democrats flipped the chamber to secure some control of government in Washington, D.C. and a significant leverage point regarding legislation, funding, and oversight of President Trump and his administration. That effort was aided by outcomes in New York, including an upset in New York City.

In the one city-based congressional seat held by a Republican, Rep. Dan Donovan lost to Democrat Max Rose, who will go to the House to represent New York’s 11th congressional district of Staten Island and part of southern Brooklyn. In the 19th congressional district covering parts of the Hudson Valley and Catskills, Democrat Antonio Delgado defeated incumbent Republican Rep. John Faso. And in Central New York's District 22, Democratic candidate Anthony Brindisi was ahead by a razor-thin margin over incumbent Republican Rep. Claudia Tenney, in a race that seems too close to call. In Congressional District 27, though Democrat Nate McMurray had conceded to Republican incumbent Rep. Chris Collins, McMurray's campaign later called for a recount when the margin between the two was only one point.

Back in the five boroughs, of the three ballot proposals passing, Mayor de Blasio said in an election night statement, “Tonight we took a big step toward becoming the fairest big city in America. The question in front of voters was simple: are we going to be a city that works for everyone? New Yorkers answered with a resounding ‘YES, YES, YES!’ They voted to set a historic new direction for campaigns in our city by getting big money out of politics. They voted to give voters more power over their tax dollars. They voted to bring new voices into our democracy. The end result of the charter revision process that began nine months ago at the State of City is a democracy that can work for all of us – not just the wealthy and well-connected.”

In terms of specific outcomes in important New York races, as of 2 a.m. on election night, initial results and tentative margins included:

-Governor Cuomo was reelected with about 58% to 36% for Molinaro, while Green Party nominee Howie Hawkins received 1.7%, Libertarian Larry Sharpe won 1.6%, and Stephanie Miner of the Serve America Movement got less than 1%. Both Sharpe and Miner earned their parties automatic ballot access for the next four years (Cuomo on the Women's Equality Party line and Molinaro on the Reform Party line did not get enough votes on those lines and parties will lose their automatic ballot lines.

-James won the attorney general office with 60% over Republican Keith Wofford, who received 34.3%, and other candidates splitting 2.3%.

-DiNapoli was reelected comptroller with 64.4%, while Republican nominee Jonathan Trichter got about 31%, and other candidates split 1.7%.

-Gillibrand won 64.5% of the vote, while Republican Chele Farley received 32.5%.

-Democrat Andrew Gounardes appears to have won with 49.8% over Republican Senator Marty Golden's 48% in Senate District 22

-Democrat Kevin Thomas won with 49.2% over Republican incumbent Kemp Hannon's 48% in Senate District 6, which includes a portion of Nassau County.

-Democrat Anna Kaplan won with 53.7% over Republican incumbent Elaine Phillips' 44.5% in Senate District 7, which a portion of Nassau County.

-Republican Robert Antonacci won with 50.4% over Democrat John Mannion's 48% in Senate District 50, which includes Syracuse and the surrounding area.

In competitive House of Representatives races, the results included:

- Republican incumbent Chris Collins, who is under indictment for insider trading, received 48.1% over Democrat Nate McMurray's 47.1% in Congressional District 27, which includes Orleans, Genesee, Wyoming, and Livingston counties. McMurray's campaign has called for a recount.

Samar Khurshid contributed to this article.