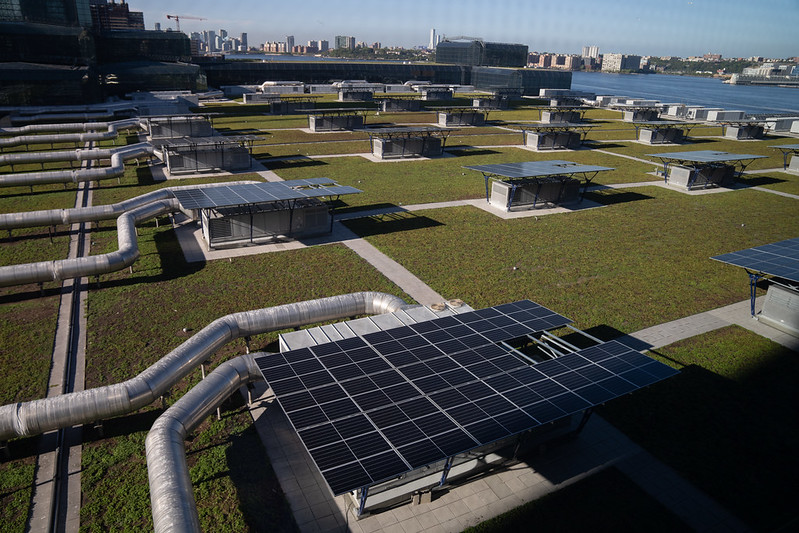 As Mayor Eric Adams’ administration follows ambitious mandates to achieve carbon neutrality over the next few decades, the City Council on Thursday examined the state of renewable energy infrastructure in the city, needs for the future, and both city and state legislation that could help expedite the path towards a zero-emissions energy grid and economy.

At a hearing of the Council’s Committee on Environmental Protection, chaired by Queens Council Member Jim Gennaro, administration officials testified to ongoing efforts at sourcing and converting to renewable energy, decarbonizing the city’s building stock, and investing in climate workforce development. The hearing comes just ahead of the ten year anniversary of Superstorm Sandy, which devastated New York City and caused about $19 billion in damage, the effects of which have yet to be fully remediated.

Gennaro, a Democrat, has long been working at tackling the effects of the climate crisis. He noted in his opening remarks that when he was previously a Council member in 2012, the city codified into law the New York City Panel on Climate Change, just two months ahead of Sandy hitting the city. The panel was meant to examine the effects of climate change on city infrastructure, the economy, and marginalized communities. The law creating the panel also created the New York City Climate Adaptation Task Force “to figure out how the city in a sensible, measured, studious way could walk down the field towards the climate in a resilient future that we all want,” Gennaro said.

At the hearing, he sought answers on the task force’s work over the last decade. “That's a real thing. It's in law. No one seems to be able to find it,” he said. “And I didn't write the law for nothing.”

Gennaro was dissatisfied with the answer, calling on the administration to better coordinate its efforts and follow the “black letter law” which requires the task force to convene every six months. The task force, he said, “has to exist. That's in law, that's a mandate. It's not discretionary. And it's supposed to work hand in glove with the New York City Panel on Climate Change.”

The broader focus of the hearing was on the city’s efforts to meet the renewable energy mandates set by law in recent years.

Under Mayor Bill de Blasio, in 2019, the city passed a “Green New Deal” legislative package that committed to a goal of carbon neutrality by 2050 and 100% clean electricity, along with several measures intended to drastically reduce the city’s greenhouse gas emissions. That same year, the state approved the Climate Leadership and Community Protection Act (CLCPA), which requires the state to cut economy-wide greenhouse gas emissions by 40% by 2030 and by 85% by 2050.

In October of last year, the Council passed another law requiring a Citywide Climate Adaptation Plan, which was due September 30 but has not been published by the administration yet. Council members did not question administration officials about the required report at Thursday’s hearing, however.

Anthony Fiore, the city’s Chief Decarbonization Officer and Deputy Commissioner for Energy Management at the Department of Citywide Administrative Services (DCAS), outlined the many efforts and investments the city is making in renewable energy, including some that were put into motion by the previous administration.

DCAS, which manages city-owned buildings and vehicles, is deploying 100 megawatts of solar energy on city properties by 2025, he said. The city, in partnership with the state, is also investing in building two new transmission lines to bring renewable energy to the city from Canada and Upstate. The city is also a partner on some of the many other efforts the state is taking the lead on, including offshore wind.

Fiore also pointed to the Mayor’s Office of Climate and Environmental Justice, which is leading PowerUp NYC, an energy planning study to meet the city’s sustainability goals. The administration is expected to release that study in the spring, officials said Thursday.

The city’s long-term efforts have made progress, Fiore noted. “Since 2014, DCAS has invested nearly $1 billion in efficiency and clean energy generation projects across 2000 city-owned buildings, contributing to a reduction in city government energy use by the equivalent of about 250,000 residencies, and avoiding about $115 million in annual energy costs, reducing overall greenhouse gas emissions by almost 25% between fiscal years 2006 and 2019 and generating more than 4,000 family-sustaining jobs,” he said.

Council Member Sandy Nurse, a Brooklyn Democrat, noted that the recently-approved federal Inflation Reduction Act could help the city achieve many of its climate goals by investing in green infrastructure. “We are still looking at it, but it's something that is on our radar,” said Ellie Kahn, senior policy advisor at the Mayor's Office of Climate and Environmental Justice. “We're absolutely paying attention to it and it's a very, very exciting opportunity.”

Federal, state, and city leaders all expect the Inflation Reduction Act’s many billions of dollars in investments in renewable energy to supercharge New York’s efforts.

One bill, sponsored by Council Member Justin Brannan, a Brooklyn Democrat, would require the city’s Department of Environmental Protection to study vacant and underutilized city-owned sites for potential use for building renewable energy infrastructure. Another, sponsored by Gennaro, would require the city to create a database of subsurface conditions that can allow the installation of geothermal heat pumps, a renewable energy source.

Fiore said the administration supports the intent of both bills. Mapping vacant and underutilized space is a “worthwhile exercise” he said, not only for building renewable energy but a myriad of purposes. And he said geothermal energy “is an important tool in the transition to a clean energy economy and in some locations will be a primary method for decarbonizing building heating systems.” He said the city has already created a geothermal screening tool and is carrying out a pilot program to install geothermal systems on city-owned sites, the results of which will begin to be reported in March.

The city’s efforts to decarbonize the privately-owned building stock are also front and center as the Department of Buildings (DOB) is in the process of creating rules that owners of the city’s largest buildings will have to meet to comply with Local Law 97, part of 2019’s Climate Mobilization Act. That law is meant to require major cuts in greenhouse gas emissions from large buildings, the city’s biggest source of carbon emissions. The DOB recently released a first set of draft rules that will now be the subject of a public feedback process.

Also on the agenda were three resolutions, non-binding pieces of legislation that often urge action by another level of government. One, sponsored by Council Member Lincoln Restler, a Brooklyn Democrat, encourages the state to follow the mandates of the CLCPA in aggressive fashion. “The City Council knows all too well that the climate crisis is the single greatest threat facing the people of New York. It's here, it's now and it demands nothing less than urgent and comprehensive action,” he said.

Ahead of the hearing, Council members and environmental advocates from Sierra Club, WE ACT for Environmental Justice, New York Public Interest Research Group, Jewish Climate Action Network, and other organizations rallied outside City Hall in support of the resolution.

As that was happening, the state’s Climate Action Council, created in the CLCPA to help execute it, was meeting to take its next steps toward developing its “scoping plan.” The Climate Action Council has released a draft plan, and continues to take feedback and adjust it toward issuing a final plan by the end of the year.

Another resolution, sponsored by Council Member Alexa Avilés, a Brooklyn Democrat, calls for passage of the Build Public Renewables Act, a bill before the State Legislature that would allow the New York Power Authority to own and build renewable energy infrastructure. “The Build Public Renewables Act will lead us into the future not just on renewable energy, but on labor and employment standards and will undoubtedly serve as a model to other states who pursue democratization of utility services,” she said.

Finally, Gennaro sponsors a resolution in support of the $4.2 billion Clean Water, Clean Air, and Green Jobs Environmental Bond Act, which is a ballot referendum in the November general election after having been passed by the Governor and Legislature. Voters will approve or disapprove the new state borrowing for environmental and climate-related projects.

Governor Kathy Hochul pushed to increase the bond act by more than $1 billion to get to the $4.2 billion now before voters to help fund infrastructure projects across the state that deal with clean water, electric school buses, resiliency projects, and more. Hochul is running for a full term this year in part on her climate record and promise to continue advancing renewable energy projects. There are also several state-level measures that did not pass this year that advocates hope to see advanced next year, including a state ban on new gas hook-ups in buildings to match the city’s, the Build Public Renewables Act, and more -- some of which Hochul has expressed support for.

Also on Thursday, New York City Comptroller Brad Lander, a Democrat and major proponent of climate action, released a report analyzing the city’s expenditure on climate resiliency over the last decade and the obstacles to climate infrastructure projects. It shows that the city has not spent nearly all of the federal money received in Sandy’s aftermath.

“The climate crisis is moving far faster than we are,” Lander said in a statement. “Superstorm Sandy was a wake-up call for the devastating risks that climate change poses to our city – but from the trudging pace of too many resiliency projects, it seems like we’re still asleep. Without significant improvements to infrastructure design and delivery, New York City will fail to get ready in time for the next storm.”