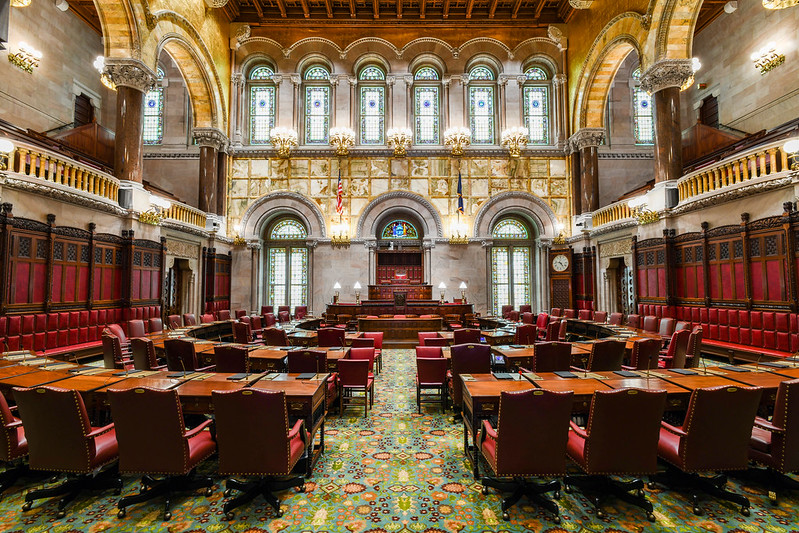 As with every wave, the Omicron variant stirred a swell of infections and death in New York State's psychiatric hospitals, where some of the most vulnerable New Yorkers are living in congregate settings that heighten the risk of COVID-19.

The state's 24 facilities, run by the Office of Mental Health (OMH), house roughly 4,400 patients. At least 55 patients and 12 employees have died of COVID-19 since the virus was first detected in New York, a relatively high patient covid fatality rate. Two patients died and hundreds more were infected across the state's inpatient system as recently as January. Four others had died previously during the Delta wave last year.

But since the start of the pandemic, the State Legislature – one of the few entities empowered with oversight of New York’s psychiatric institutions – has held no public hearings to examine conditions inside those facilities nor sought testimony from the officials in charge. The lack of oversight is unique in comparison to hearings held to examine the state’s handling of COVID-19 in other types of settings.

Little is known to the public about the experiences of committed psychiatric patients during the pandemic. The lack of oversight and limited reporting in the news media are driven, in part, by the isolated nature of the facilities and restrictions on visitation for family members and lawyers during covid surges. Advocates for patients say a lack of transparency has plagued the State Office of Mental Health, which runs the psychiatric hospitals, and hindered efforts to address unsafe conditions.

The patient covid mortality rate at state psychiatric hospitals is close to ten times that of state prisoners, another involuntary setting under state control. The thousands of patients at state psychiatric facilities include hundreds of people who entered through the criminal legal system and many with severe mental illness like schizophrenia or depression. Patients can be resistant to or unaware of infection control measures creating an ongoing struggle for administrators and staff. They are more likely to have underlying conditions than the general population and skew older than people in state prisons, where civil rights activists have called attention to poor covid safety and inhumane conditions.

OMH officials say the state is taking precautions but new questions about the efficacy of these measures arise with each wave.

This January, while many New Yorkers sighed with relief as covid infection rates fell across the state, including in most psychiatric hospitals, the virus continued to spread in some facilities. A new outbreak in Buffalo Psychiatric Center that began in mid-February and infected dozens of patients took weeks to subside, only subsiding this week. Smaller outbreaks persist in several other facilities, like Capital District Psychiatric Center in Albany, where cases have been ticking up slowly for weeks, according to available state data.

OMH has developed a number of covid safety protocols since the chaotic first months of the pandemic in the spring of 2020, including disinfection and hygiene regimens, distributing PPE, and some covid screening measures. Psychiatric patients were one of the first groups to become eligible for the vaccine in New York and the state has made it available to patients who want it. Hospitals have increased testing of staff but questions remain about the frequency of swabbing patients.

Last April, the state took the unusual step of authorizing OMH to vaccinate patients against COVID-19 over their objections, raising concerns among patient advocates. In June, OMH officials said no patient had been involuntarily vaccinated though one facility had moved to do so before withdrawing the order.

The pandemic also compounded long-standing due process concerns for patients, who can be held indefinitely at the discretion of a judge once they are committed. In the first year of the pandemic, patients were rushed into institutions at higher rates than prior years in order to free up regular hospital space for covid patients and the average length of stay increased.

Some of the policies compound the isolation, according to patients and staff, like limiting visitation, outings, group therapies, and in some cases communal dining. In South Beach Psychiatric Center, for one example, employees have complained of staffing shortages and exhaustion after two years under the virus.

When reached for comment last month about the January surge, the chair of the New York State Assembly mental health committee, Aileen Gunther, a Sullivan County Democrat, expressed concern over conditions in facilities and the need for rigorous covid safety protocols.

"The most important thing that you can do is infection control precautions. You have to really have due diligence," she told Gotham Gazette in a phone interview.

When asked, Gunther lauded the idea of an oversight hearing – where the state's top mental health official, OMH Commissioner Ann Marie Sullivan, would be asked to answer questions about psychiatric hospitals – though it seemed to be occurring for the first time to the Assembly member who could call such a hearing.

"I don't really think that we have had that but it's actually a good suggestion. I think that sometimes what happens is that we do it afterward," Gunther said, referring to the typical end of an incident or crisis. "Because I guess this isn't our first rodeo here, it seems that this is not going away and it keeps mutating."

"It's actually a great idea and I will bring that up to the commissioner," she added, of the idea of holding an oversight hearing.

Sullivan came before the Senate and Assembly mental health and finance committees in a joint legislative budget hearing two weeks later, on February 14, but faced no questions from lawmakers about covid safety in state psychiatric hospitals.

Gunther's office did not respond to multiple requests for comment for this article about a lack of oversight of state psychiatric facilities with regard to COVID-19.

Frank Sainato, a spokesperson for State Senate Mental Health Chair Samra Brouk, a Rochester Democrat, said the senator’s office "has continued to work with the Office of Mental Health (OMH) to monitor and improve conditions in state psychiatric centers."

"OMH has confirmed with our office that protective actions—such as employee vaccination, regular testing and the use of personal protective equipment—are being taken," he wrote in an email. "We remain committed to protecting the health and wellbeing of those patients living in state psychiatric centers."

Sainato did not respond to questions about what the Senator saw as going well, felt needed improvement, or was concerned about, if anything.

James Plastiras, a spokesperson for OMH, said the agency has come before the State Legislature and discussed covid-related procedures.

“OMH has participated in Legislative Hearings, responded to questions from members of the Legislature and shared information and data regarding our infection control policies and protocols," he wrote in an email.

Plastiras pointed to an Assembly oversight hearing in September 2020, focused broadly on the state's mental health system. Commissioner Sullivan's presentation had only a single slide on psychiatric centers and no lawmakers asked about the subject of covid in the facilities during her hour before the committee.

"OMH’s top priority throughout the pandemic has been to protect patients, clients and staff from COVID infection; And although the winter surge and more contagious variants of COVID increased infection rates in communities across the State, the infection control measures implemented by OMH have helped us protect our employees and the 11,861 patients served in our psychiatric centers since March of 2020,” Plastiras wrote.

'Uniquely Insular Settings'
Congregate settings like nursing homes, prisons, and homeless shelters have gotten significant attention from officials and the media because of the virus's propensity to surge in close living quarters and among the populations housed there – the elderly, people with medical conditions, special needs, and people experiencing the social factors associated with poverty and discrimination that lead to worse covid outcomes.

A report published by the New York State Bar Association in June 2021, found a "complete lack of public reporting" of COVID-19 infections and deaths in facilities operated and licensed by OMH and the Office for People with Developmental Disabilities at the time.

"Data transparency, in particular demographic data with respect to individuals living in long term care settings and the staff employed in these settings, is essential for syndemic analysis on public health and must be assured by New York State agencies going forward," the report reads.

At some point after the first wave, OMH began publishing daily snapshots of infections and cumulative covid-related deaths among patients and staff in psychiatric hospitals. The data is refreshed most days making it difficult to track trends in infection.

According to the Bar Association, four entities beyond the State Legislature have legal oversight authority of state-run psychiatric hospitals. Two are within state government – Mental Hygiene Legal Services, a branch of the state court system that represents most committed patients, and the Justice Center for the Protection of People with Special Needs, which investigates allegations of abuse and neglect. Also empowered with investigative functions is the Board of Visitors and Disability Rights New York, a federally-funded advocacy organization.

Mental Hygiene Legal Services would not comment for this article about covid safety or the lack of legislative oversight.

Marc Fliedner, the director of protection and advocacy for people with mental illness at Disability Rights New York's, said the recent outbreaks in psychiatric hospitals should be raising alarms.

"It's particularly concerning after two long years when advocates have been unable to regularly access the facilities and observe daily conditions," he wrote in an email. "These are, after all, uniquely insular settings, where those detained are cut off from those support systems that would otherwise insure their safety."

"The fact is that, 50 years after Willowbrook, those who are forced to reside in these psychiatric facilities are exposed to daily harms that the rest of us who live in our chosen communities simply are not," Fliedner wrote, referring to the landmark disability rights case that led to the closure of the notorious Willowbrook State School in 1987.

"DRNY urges continued review and oversight of these facilities by state policymakers to insure that the state does better," he wrote.