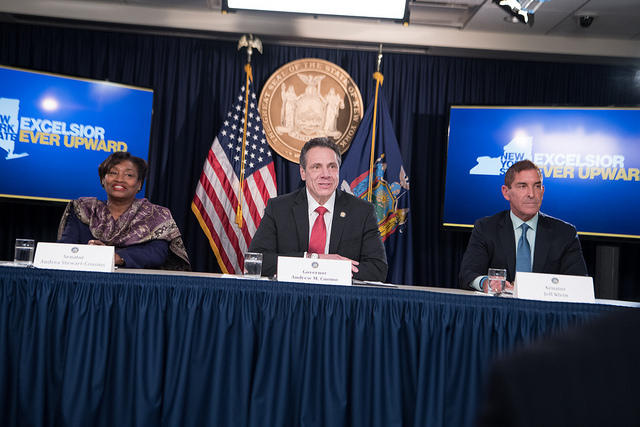 As 2018 comes to a close, we’re looking back at some of our “best” and most-read articles of the year. In a separate post, we’ll highlight some of the “best” pieces we reported that aren’t among our top ten most-read articles, which are listed below. This list does not include articles like election guides or candidate lists or even our summaries of voter turnout numbers, all of which are often among our most-read posts, as was our article that reported on the mayor's charter revision commission announcing which questions it would put on the November ballot.

The list below also does not include opinion pieces, though several of the op-ed columns that we published this year did qualify in terms of page-views. But this list is for reporting done by Gotham Gazette, and here it is, our ten most-read articles of 2018:

1. Conflict Escalates Between Working Families Party and Independent Democratic Conference
by Ben Max, March 2018
In late February the Working Families Party announced a series of candidates it was backing to challenge members of the Independent Democratic Conference in state Senate primaries. While a lot changed from February to the September primaries, in the end six WFP-backed candidates defeated members of what had been the eight-member IDC, with the WFP working alongside an extremely organized and energized group of other activists set on unseating IDC members and flipping the state Senate to Democrats.
Read the March article about the WFP escalating its efforts to unseat IDC members.

2. In Run for Governor, Marc Molinaro Will Make A Character Argument
by Ben Max, March 2018
As Republican Marc Molinaro launched his campaign for governor, this profile outlined how he would pitch himself to voters as a person of integrity and good leadership, and juxtaposed as such to the image he would portrary of Governor Andrew Cuomo. The Dutchess county executive ran a spirited and earnest campaign, regularly hitting the themes of this initial Gotham Gazette look at his candidacy, which was based on an hourlong interview with Molinaro while he was deciding whether to run or not. In the end, Cuomo dispatched Cynthia Nixon in the Democratic primary, then beat Molinaro and others in the general election, winning a third term.
Read the March article about how Molinaro would present himself to the statewide electorate and his stances on several key issues.

3. Questions Arise as De Blasio Administration Rezones Series of Low-Income Neighborhoods
by Sam Raskin, March 2018
Mayor de Blasio's administration has pushed through several neighborhood rezonings aimed at adding housing density, building affordable housing, and making neighborhood improvements. All of them have occurred in low-income neighborhoods, a phenomenon not lost on many. In this piece, we examine the trend and what it means as areas like East New York, East Harlem, and the Jerome Avenue corridor in the Bronx are rezoned.
Read the March article about the de Blasio administration's approach to neighborhood rezonings, and which areas of the city appear to be off limits in terms of seeking added housing density.

4. Major Cuomo Supporters Don’t Want a Democratic State Senate
by Ben Brachfeld, April 2018
As Governor Cuomo professed his full support for helping to flip the state Senate to Democrats, this article examined the fact that many of Cuomo's biggest supporters were also supporters of a Republican Senate. The Democratic governor had, after all, himself been seen as supportive of a split Legislature, with Democrats in control of the Assembly, so that he could triangulate, carefully craft which progressive policies he wanted to pass, and keep fiscal restraints in place, while also pushing ahead a charter school and real estate friendly agenda that aligned with his beliefs.
Read the April article outlining the main Cuomo backers who also backed a Republican state Senate.

5. Is Cynthia Nixon Qualified To Be Governor?
by Ashley Hupfl, April 2018
From the moment she declared her candidacy for governor, Cynthia Nixon was dogged by one key question: what makes you qualified to lead the state of New York and run its government? Nixon gave various answers to the question, mostly saying that she had the right values and the right policy plans. In this article, we explored her qualifications and the general question of what makes someone qualified to be governor.
Read the April article discussing Nixon's resume and what it means to be qualified to become governor.

6. Senator Facing Tough Primary is Spending $1 Million from Brooklyn Borough President
by Daniel Yadin, August 2018
State Senator Jesse Hamilton, who became a member of the breakaway Independent Democratic Conference, was the preferred successor to Brooklyn Borough President Eric Adams when Adams left the Senate to take his borough presidency position. The two close friends remained tight as Hamilton fought for his political life against a variety of forces looking to unseat him and other members of the IDC, and Adams was helpful to Hamilton in an unprecedented move of providing city funds for Hamilton to dedicate to projects in his Senate district.
Read the article that exposed the fact that Senator Hamilton was generously allocated participatory budgeting money by his close ally Borough President Adams as the senator was in a tough reelection campaign that he ultimately lost to Zellnor Myrie.

7. Now Pursuing Diversity, New City Council Speaker Has Employed Mostly White Men
by Samar Khurshid, January 2018
During the race to become the next speaker of the City Council, questions were raised about diversity in city government leadership given the fact that the mayor and comptroller were both white men, along with top statewide positions. As Corey Johnson won that race, he talked about both the diversity he would bring to the role as an openly gay and HIV positive person, and the diversity he promised he would bring to the Council under his leadership. But a review of Johnson's hiring as a City Council member showed a track record of largely employing white men.
Read the January 2018 article that examined new Speaker Corey Johnson's past staffing demographics and his pledge to hire a diverse staff as speaker amid questions about the elevation of another white man to a powerful city government position.

8. Close Ties Among Bronx Electeds, Campaign Consultants, Lobbyists and Donors
by Jake Shore, October 2018
There are often blurry lines in politics, especially when government and campaigns are concerned, involving lobbyists, consultants, donors, and elected officials who have various relationships. Some of the closest ties in New York politics have included State Senator Jeff Klein and City Council Member Mark Gjonaj, along with consultants and lobbyists who have worked with them, and donors who have given to their campaigns.
Read the October 2018 article that examined the close ties among Klein, Gjonaj, campaign consultants and donors, and others in their orbits.

9. Why Does Crime Keep Falling in New York City?
by Samar Khurshid, January 2018
While New York City has seen decades of declining crime numbers, part of a national and international trend, do we really know why? In this article we explored the theories and the facts about New York City's remarkable crime decline.
Read the January 2018 article that examined the decades-long crime decline in the city, which has continued under Mayor Bill de Blasio, some of the reasons experts provide for the trend, and what can actually be supported by data.

10. A Closer Look at 'Vital Brooklyn,' Cuomo's Plan for 'One of the Greatest Areas of Need in the Entire State'
by Rachel Holliday Smith, December 2018
Governor Cuomo surprised many people when he first announced in 2017 a state investment of $1.4 billion in Central Brooklyn, with the governor explaining that "Vital Brooklyn" was a program to bring much-needed resources to an area of the city and state with some of the most significant challenges facing New Yorkers, including poor health, bad schools, lack of park space, and more. The program hadn't been a heralded or even named part of the prior state budget deal, but Cuomo explained it as a major initiative and went on to make many Vital Brooklyn announcements, including several in the lead up to the 2018 primary election wherein he was attempting to defeat Cynthia Nixon while relying on a political base including Central Brooklyn voters.
Read the December 2018 article that examines what exactly Vital Brooklyn is, where the money comes from and is going, and how Cuomo has used the program to make those many announcements.